Well, I wish the object that I’m going to talk about with you today was the Holy Bible or something like that, but it’s actually my camera—my Canon G15 Powershot. I take it with me practically everywhere I go. It’s super easy to use, it’s automated, it has auto-focus and a zoom, and it takes good high-resolution pictures. It’s also about the size of a small transistor radio, and since it’s digital, I can take as many shots as I want. One thing I love about my camera in particular is you can take photos in low light without using a flash. Sometimes a flash is fantastic, but other times it’s a buzz-kill visually speaking, and you can lose all the atmosphere of a situation.

Robert Frank, Robert Doisneau, and Henri Cartier-Bresson are some of my favorite photographers. I also love Harry Callahan, who was teaching at Rhode Island School of Design when I was a student there, and I used to see him walking all around Providence taking pictures. In general I tend to like landscapes or portraits of people, especially beautiful women. That’s my weakness. I haven’t always taken photographs myself. In the past I often didn’t even own a camera. Once RISD sent Tina and me little Olympus cameras. I think they might have been a gift for giving the school a donation—so on family vacations we would bring out the cameras and take some shots, but nothing serious. We weren’t really persistent, never the kind who had the camera ready at all times.

And I don’t know why, but with Talking Heads and Tom Tom Club, we really never photographed ourselves either. Occasionally we would pose for a photographer in a studio, and there are plenty of live shots of us, but there are other bands—for example The Clash—where it seemed like they never left their flats without having a photographer present. I don’t think they were usually taking the photographs themselves, but there were so many photographs taken of them over such a long period of time that a few years ago they were able to have not one but a couple of beautiful coffee table books.

More recently Chris Stein of Blondie who did take photographs himself with real film—he’s a good photographer—also came out with a book. The photos are mostly of Debbie Harry of course, who’s quite an amazing subject, but there are other great ones too—including Tina and her sisters in the early days before Tom Tom Club sitting at the bar at CBGB. Another of my favorite photos is of Tina with Grandmaster Flash taken by Laura Levine for the New York Rocker back in 1982. It’s now in the National Portrait Gallery in Washington, DC but we also have a very nice print. Gorgeous!

I’ve carried around a small Moleskine notebook in my pocket for a while, and I use it to jot down memories that pop into my head. For example, here I have: “Bob Dylan in concert at The Mosque in Richmond, Virginia, 1964,” “Opening for Bryan Ferry at The Bottom Line,” and “Duckie Simpson from Black Uhuru telling me that he had a big crush on Princess Di!” 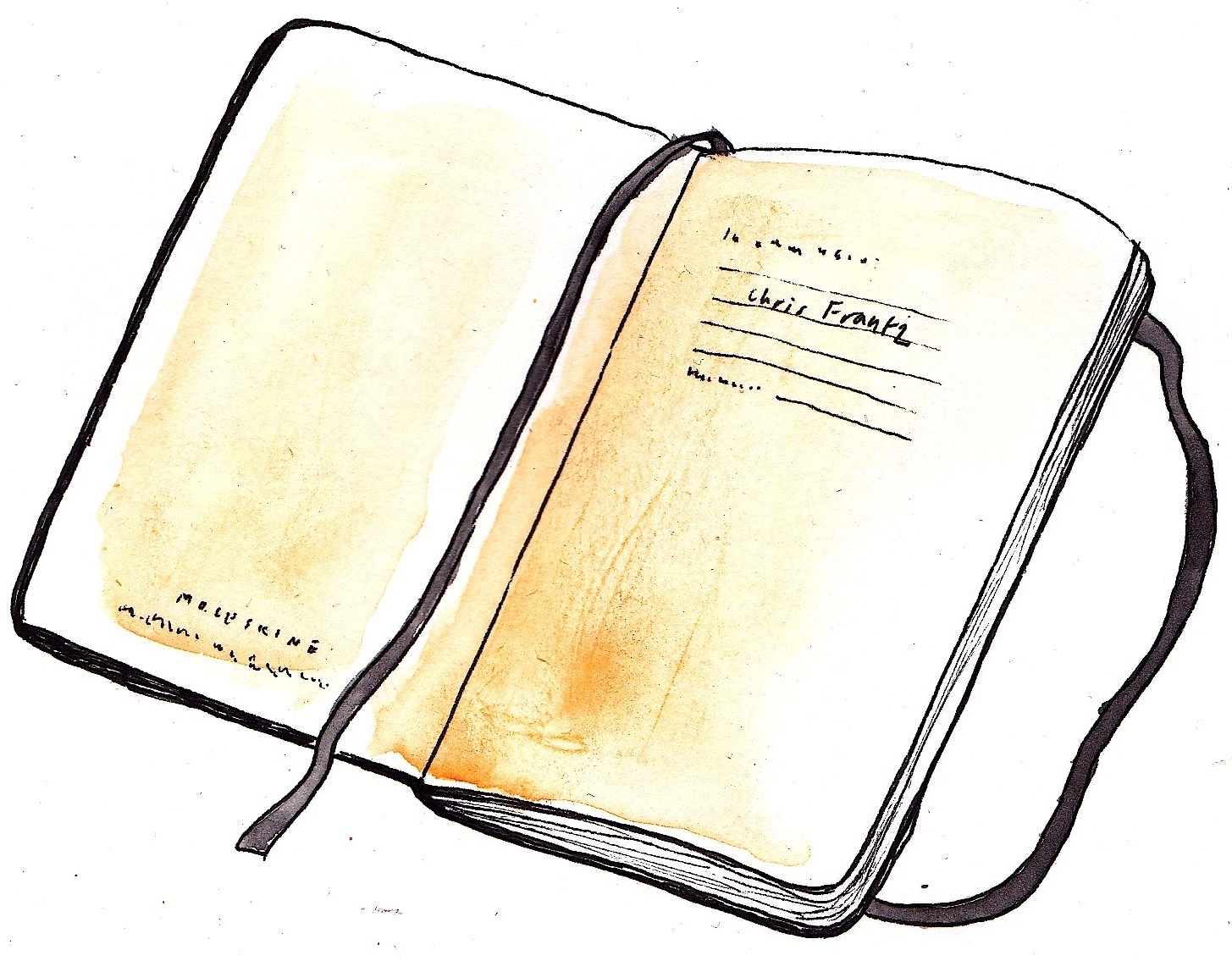 Oh, and here’s another one: “James Brown in Nassau, Bahamas when I introduced him to my father”—This was at Compass Point where Brown was making an album, which unfortunately never got released. But he was walking around outside the studio looking out at the beach on day and we had a nice conversation with him. Some day I’ll share that whole story, but for now let’s just say it was a meeting of the minds!

When I saw other people capturing experiences like these visually, I eventually realized I should be doing this too. I got the kick in the pants to start about eight years ago when my younger son Egan was in college. He went to Hampshire, studying poetry and photography, and he did a semester at the International Center of Photography in New York. I thought it was great. I was never trained in photography, like f-stops, and how to develop film and stuff like that, but in art school I had been trained as a painter and I knew how to use my eye. Egan encouraged me to try photography, so I listened and he was right.

I really enjoy photography! For me it satisfies the need to document things visually, and to create something that’s pleasing to the eye. For example, I live on a pond and I’ve gotten into photographing the pond nearly every morning from the same spot, so over the course of a year I might have more than three hundred photos of the pond in various states of foliage, of being frozen over and not frozen over, snow, sunshine, clouds, rain—showing the passage of time. Sometimes I will use an editing tool, and Instagram is great for filters if you so desire. Sometimes you can add excitement to what otherwise might be a mundane shot. I rarely make prints of my photographs but I often post them on Facebook. Egan has on occasion “liked” them, which I take as a great compliment, because Egan has become a professional artist and his standards are very high. I also take pictures of my friends… but I generally don’t post them online unless of course they happen to be very flattering!

A long time ago Tina and I learned from Brian Eno to use the recording studio as a tool for songwriting. We have our own studio, and ever since the Talking Heads’s Remain in Light, and also for all the Tom Tom Club albums, we just go in and get going. Our process is deceptively simple. Some musicians need to impress people with their technical prowess but we build our songs layer by layer, and we try to break the beats and accompanying instruments down to their essence so the song tends to sound bigger. There are fewer parts stepping on other parts. My approach to photography isn’t much different.

I can understand that for purists, the camera I’m using to make images is “cheating” in a way because the process is somewhat automated, but if you think of the image as something you create, something you want to be remembered in the history of images—let’s say you’re thinking big—then I think it’s okay to use any device or app that’s known to man in order to make that image more memorable.

David Godlis was one of the guys at CBGB who was there virtually every night and he took also pictures all throughout the East Village. He has these great black and white images of our band, and Television, Patti Smith, Blondie, Hilly Kristal—the list goes on and he has a book about to come out too. His images are gorgeous, and deeply rich, and I understand that they would probably be hard to get on a digital camera because he was using film and certain development techniques. Robert Mapplethorpe also photographed us, and I’ve got to say it was one of the better pictures taken of our band. It was publicity for the album Naked, which was the last studio album we did with Talking Heads. But I also have to say that the preparation was almost soul-crushing. He told us to get to the studio in the afternoon. He wasn’t there when we arrived but we were greeted by the stylist who was there to make sure our clothes were good enough for the image, and a makeup person, and a hair person, and when his people were happy with the way we looked, then he arrived. He placed us up on a little riser in front of his camera and tripod and said, “Turn your head just a little bit this way, no, just a little bit back, no, a little bit up,” then “David, try not to look at the lens!” And finally he took two photos, one with a little less light than the other. But the preparation was about ten hours for two photos!

Unlike Godlis or Mapplethorpe, I consider myself an amateur photographer, and I’m most interested in using the easiest tools I can find to create the images I want. For me taking pictures is much easier than making music. You find a good subject, make sure the light is good, and then you push a button. That’s it! (Laughs) Yes, it is your eye selecting it, and that’s a skill, and maybe also a talent, but it’s not as difficult as drumming has been for me. I consider myself a pretty good drummer but it’s taken me over fifty years to reach the point I’m at now, whereas I think I’ve already taken some pretty decent photographs.

I know it’s not too late for me to create a visual archive of my world. My subjects could be anything from people standing in line at the Dairy Queen to Catherine Deneuve when I bump into her at the Jardin du Luxembourg. What I want/need/love most are the tools that allow me to document what I see and experience, at home and in my travels, now and in the future.

Rock and Roll Hall of Fame inductee Chris Frantz is the drummer for Talking Heads and Tom Tom Club, which were both co-founded with his wife and longtime musical collaborator, Tina Weymouth. Frantz and Weymouth have produced their own recordings as well as GRAMMY award-winning albums for artists including Ziggy Marley and the Melody Makers and Los Fabulosos Cadillacs. The two have also contributed backing vocals and percussion to Gorillaz, and they have a new electronica project in the works called Chris Und Tina.