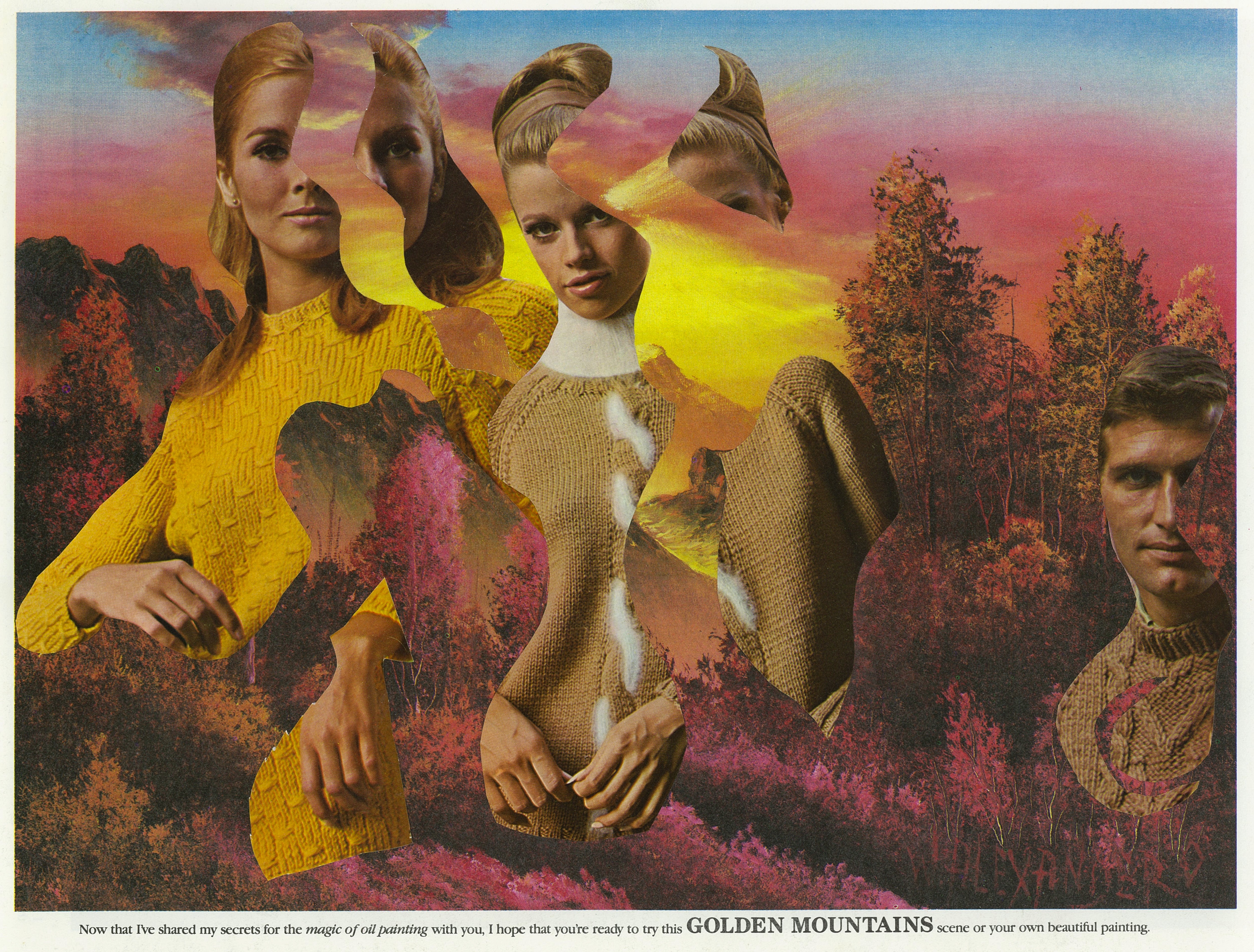 The art and philosophies of John Stezaker were a major force behind my growing interest in collage. It was the book, The Age of Collage, and the videos about that book that really excited me about the possibilities of the form. Exciting side note: The Age of Collage 2 is coming out soon!

Stezaker’s deceptively simple work was a highlight in that book and other books I’ve picked up on collage art. His work often features just two elements—a vintage (pre-WWI) postcard and a movie’s publicity still or headshot photo (often post-war) are common tools of his repertoire. He blends them magically with sharp cuts, clever angling, and a visual focus point that suggests a surrealist optical illusion. His work reimagines the glamor of a bygone era and makes images feel more vulnerable or dangerous than they originally were. It is through his work that I first felt the sensation of being disturbed by what you can’t see in a collage. His series, Mask, illustrates this unsettling quality best. A current (and rare US) show, The Truth of Masks, is currently up until January 30th at Richard Gray Gallery in Chicago.

While it has been fairly easy for me to find and connect with younger collage artists online to interview for this column, I felt like trying to contact Mr. Stezaker would be too much of a lofty goal. He is a longtime artist on another level and I still feel like a rookie—not just at making collages but also talking about them. I’ve spent the past two years faking it while I’m making it.

But as the last Paper Trumpets column loomed, I decided to figure out a way to talk to this hero of mine. After a few days of emailing galleries and agents, I received a response from Mr. Stezaker and he was very gracious to let me ask him some questions via email.

The Rumpus: When I was first getting into collage, I watched this video of you where you talked about your work and it made a big impression on me. I felt like a kid discovering his favorite music for the first time. Was there any artist or piece of art like that for you?

John Stezaker: My first encounter with Joseph Cornell’s work in the real was something of an epiphany. I had seen the work in reproduction, but the encounter with his work at the Whitechapel in a big retrospective (in 1981) had a huge effect on me. It seemed to give me permission to work with obsolete or out-of-date images. I had previously thought that appropriation had something to do with creating an indexical reflection on contemporary culture as most appropriation art is. It was a combination of Cornell and Walter Benjamin that made me aware of what is revealed in the detritus of culture, in what is forgotten by history. Cornell thereafter became a role model for me. He exemplified the idea of the artist as an exile from life in the world of images. Rumpus: Much of your work involves just two pieces. Have you made collages with more than a few images or do you lose interest when the image is too crowded?

Stezaker: Yes, my work seems to be essentially dialectical. In my “Marriage” series for example, I was very influenced by Picasso’s portraits, especially from the 40s. He always used combinations of three vantage points on the face: frontal, profile, and three quarter view. Francis Bacon always favored these three as well. Only occasionally have I managed to produce triple-faceted portrait collages. Recently I was invited to participate in a large group show of Picasso homages and I decided to use the occasion to try and extend on the very small number of these triple collages. However in the end I failed, only confirming in me the conviction that my collages are essentially dualistic. The only real exceptions are my third-person collages, which are composed of two images but the two are mediated by the silhouette of a third person. I often find that I have to start with multiplicity before I arrive at something more simple. The more crowded collages tend to be discarded.

Rumpus: In The Age of Collage it mentions that you cut up and defaced books as a kid. What would you do to them exactly? Any particular kinds of images that you were partial to at that age?

Stezaker: I think this relates to an anecdote I am fond of mentioning about my early childhood, when at a very early age I was left in a room with a leather-bound volume about Queen Victoria’s life published on her death. I scribbled in wax crayon on many of the pages, defacing it so thoroughly that I ended up being given the damaged book. You could say it was my first book of found images. I learnt early on that defacing and tearing images was a way of taking possession of them!

Rumpus: How much of an appeal do you think nostalgia plays in your art?

Stezaker: I don’t think of my work as nostalgic because nostalgia relates literally to a lost home. The images from the past that fascinate me come from a time before I was born, so there is no original experience (or original home) to which I have a nostalgic yearning. Rather I seem to be attracted to a world in which I did not exist. Burke suggests that this is something like the attraction of the sublime—of a world that is uninhabited. I love the alienness of old images. Also they are moving away from ordinary, cultural legibility and are beginning to reveal an estrangement from meaning. Rumpus: What do you think of the current resurgence of collage art, and more to the point—are you flattered by all the artists doing similar work as you?

Stezaker: Obviously I am pleased that my work is being recognized in this new wave of interest in collage. It has allowed me to leave teaching and dedicate myself to my work for the last ten years without interruption. However, the downside is that most of what I see in contemporary collage is horrible. There is very little going on that I find interesting. I have a particular difficulty with what digital culture has made possible. I call this montage rather than collage. Also the pastiches of my work in advertising I find particularly upsetting and I cannot help feeling that my work is being threatened by this inundation. The most disturbing thing of all is what I find on Google under my name. There are many works that have nothing to do with me. I even had an occasion recently in which a curator approached me about showing particular collages they had found online, which were not mine at all.

Rumpus: Are you still gathering images? Where from? I understand you have a very large collection already.

Stezaker: I am. I no longer find most of them in bookshops, junk shops, flea markets, or even shops specializing in cinema ephemera. These have become rarities in London. However, I have found a way of using digital culture to my advantage. I approach commercial collections of film images and ask them if they have unwanted or damaged material. Collectors are always happy to unload unwanted material. I find the most value in what collectors find the least value. I also get something of the same excitement of discovery in opening up a box of images bought blind, as I did from my earlier rummaging excursions.

Rumpus: What else do you want to do with collage? What have you failed at and what are you most proud of?

Stezaker: I don’t really ever know what I am doing in collage. I have to have aims, I suppose, to start off, but I never feel as though the work is happening until at least two digressions from my original intentions. Once I have lost track, somehow the image appears—always in spite of myself and my aims. I have number of projects underway—several collage films and recently I have started curating, which is I realize another form of collage. Failure for me is not a negative. I feel all art is related to failure. The Orpheus myth relates to this. Orpheus has to believe he can bring the nocturnal image of Eurydice out of the realm of death into the real world—he has to believe he can make the image come alive even though he is doomed to failure. All artists suffer this necessary delusion. In these terms, I suppose, I am proudest of my failures.