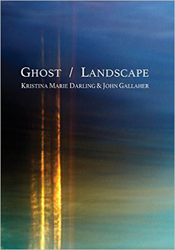 Picture it: a warm spring night in downtown Los Angeles.  Two writers are meeting for the first time at the annual Association of Writers and Writing Conference.  A few hours later, they will read together at an off-site event at Opulen Studios, sitting on matching stools, sharing the same music stand for their pages.  And I will be in the audience that night, watching and listening intently.

The book they read from is an intriguing collection of prose poems called Ghost/Landscape.Two days prior, I purchased this volume at the conference book fair, intending to savor it on my long flight home, but Ghost/Landscape commanded my full and immediate attention.  Now, when Kristina Marie Darling and John Gallaher begin to read, I follow along on pages already dog-eared, phrases already underlined. And all the while they are reading with such vigor and ease, I marvel that these two strangers have written this remarkable book together.

Even between close and long-time friends, collaborative writing continues to surprise and delight me, particularly when the voices do more than merely harmonize as an efficient duet.  The best-case scenario for collaboration—the kind which Darling and Gallaher epitomize—is a resounding and self-reflective symphony, each participant playing more than one instrument at a time and both taking their turn conducting the band.

In reading Ghost/ Landscape, the reader gains a sense that both writers have been stretched beyond their singular capacities in order to produce this multi-valent, multi-vocal opus.  How did they do it?  The book contains, among many things, a threaded meditation on the collaborative process itself.  This is a book that strings the Meta like a fiddle and plays it well.  Consider this tune: “It’s a kind of shared consciousness, traveling like the strands of a spider’s web.  If one of us thinks of winter, it’s not long before the trees grow heavy with ice.”  And lo and behold, those icy trees begin to appear and disappear throughout the volume.  The language of the book is never stagnant, and the seasons of the embedded story continue to change.  We encounter this moment: “The only difference now is that the trees are covered in ice.”  Awhile later, this one: “We just sat there with our coffee, wondering where all the iced-over trees had gone.”

Collaborations, in life as in art, are best powered by questions.  Perhaps the quintessential question of collaboration is articulated here: “Where are you now and how can I get there?”  Isn’t this what all friends and lovers, teachers and students, want to know—not to mention artists seeking to create master works together?  And here is one possible answer to this question, rising up from Darling’s and Gallaher’s deep, presumably bottomless well of postulations: “we all think we’re having different lives when really there’s only one life and we’re sharing it.”  In other words, both speakers are the ghost that haunts this volume, and both speakers are the haunted landscape.  The title slash is not a line meant to separate title character from title setting, but a saloon door that swings forward and back between scenes in continuous and simultaneous progress.  Time must necessarily move in swirls, ellipses, and recursive arrows across and around this book that opens with “Chapter Two” and concludes with “Chapter One” while “Chapter Three” appears somewhere near an arbitrary middle.  In other words, when I’m not reading Ghost/Landscape, I have the sensation that the book is going on without me, under the sleek covers, “in the basement of the subtext,” and I want to get back to it now.

Between the numbered chapters are those named for regret, miracles, gardening, etiquette, museums, houseguests, and transcendence—and these are just the chapters that identify themselves as such—the meta-chapters, if you will.  The three-page table of contents is an eloquent cacophony of titles that double as prompts, riddles, punchlines, cautionary tales, and assorted amusements.  The contents can also be read as a cento-chapter all their own—out loud and with gusto.  (I’ve tried it, and it works!)  Go ahead, get a pen and some strips of paper, and write a few of these down.  Then, toss them in a bowl and fish one out.  Whatever you get, I guarantee you’ll be moved to write in response:

What Would You Have Me Say

The Minor Risks That People Worry Too Much About

So Let’s Talk About Your Intimacy Problems

Next Time You Hear The Alarm, It is Not a Test

The diction of this book is designed to elicit ambiguous emotions (the most promising kind), forgotten anecdotes, and insights that both confound and clarify.  This makes it my favorite kind of book—a meta-book, if you will.  Each poem reads like a tarot card, and you, the reader, are implicated in every fortune being told.  Sometimes you feel like the medium lighting the candles and shuffling the deck.  Sometimes you’re certain it’s your own palm being inspected, while the speaker(s) read between the fleshy nexus of your lines.  Maybe Darling and Gallaher have written us toward the third tier of collaboration: when the people in the audience discover maracas under their seats, and bongos, and hand-bells, and a lost recorder from second grade, and hell, even a cowbell.

There’s a prose poem near the fulcrum of Ghost/Landscape that I want to call a lyric essay, that I brought into my Lyric Essay Class and read (out loud and with gusto) to the students assembled there.  It’s called “List,” and I fancy myself friendly with lists.  I have a hunch this list would be flattered to claim the name lyric essay because what’s more inductive and exploratory and contrary to binaries than a genre that wants to be, continuously and simultaneously, both an essay and a poem?  The List is structured around twelve steps.  The List is a rhetorical wonder.  The List includes luminosities like “There are all these unforeseen consequences to generally good ideas” and “‘Only fools want to be great,’ the great tell us to keep us from trying too hard to be great.” The List also instructs us, quite meta-tastically, to “Remember your steps” in the middle of taking them.  After all, this book is as much about the process of making it as it is about the project being made.  Diderot makes a cameo on the List, and a series of competing pangrams are assessed for their relative value.  The winner emerges here: “‘Mr. Jock, TV quiz PhD, bags few lynx’ because it uses each letter of the alphabet once, if letter economy is also a goal.”  The List interrupts itself early on to observe: “This is either right now the beginning of something or it’s not.  End.  Middle.  Something else.”  And that’s when one of my students, collaborating with fellow readers and fellow writers and the text itself, interrupted the text—Right there!  That’s what a lyric essay is!  The ‘something else’!  I could not agree more.

Remember how I told you that Kristina Marie Darling and John Gallaher met for the first time at AWP 2016 in Los Angeles?  That’s where I met the authors for the first time, too, and learned they had admired each other’s work from afar for years before deciding to write together from a distance.  Did they know they would meet in person at the conference where their collaborative volume was finally released?  No—but perhaps the book foretold of this meeting as well.  Perhaps their collaboration somehow anticipated the final outcome through its séance of intersecting stories.

Reading Ghost/Landscape at the conference I kept discovering references to conferences—a whole narrative capturing and critiquing what conferences are like.  I wondered, given the book’s shape-shifting nature, its dynamism, perhaps really its animism—this is not too strong a word—if I were to read this book at a ski resort, would snow-capped mountains and couples bickering on chair lifts begin to appear in the background?  Or if I were to read this book on a Caribbean cruise, would all-inclusive meals, snorkeling side trips, and throngs of tourists soon arise to populate its pages?

Instead, lingering in meeting rooms at the LA Convention Center and surrounding hotels, I read:

The admonishments came slowly, the way a sheet of ice forms over a lake.  According to the first panelist, you carried winter on your back, a little storm gathering outside the kitchen window.  The moderator seemed to fixate on the incessant mention of gardens, the entire landscape gone white with waiting.  Then the endless questions about the weather.  Soon the audience could only murmur and nod.

The talks went on for days.  Outside the conference hotel, the trees swallowed their tongues.  The darkening auditorium, an empty foyer.  The same expectant backdrop shuddering in the distance.

Later, I read and guffawed:

In another version of the story, we drove past the abandoned houses, watching for a particular type of sincerity.  You needed examples for a conference presentation, which would inevitably culminate in a diagram.

Still later, I read and laughed and winced—sequentially, it seemed at the time, but somehow all at once:

Before the conference even started, we’d gotten into an argument.  Because there are other things that were exciting about the dinner party.  No, not your lengthy defense of the lyric, or your friend’s various opinions on enjambment. […] The breach of etiquette, the newly articulated boundaries.  But when I turned to tell you, the lecture hall was empty, and you’d left your phone behind on the desk.

Despite the wealth of stunning-haunting moments in Ghost/Landscape and my multiple readings of it, I always come back to this line: “There are all these unforeseen consequences to generally good ideas.”  I think the book at large riffs off its own insight here, for Ghost/Landscape is not—could never be—the offspring of a single idea.  Forget high-concept, forget working-thesis.  This book is Eliot’s “all is always now” as literary soundtrack.  It is two DJs and eighty-two record-poems spinning at once.  It’s too easy, though not untrue, to call the work “poetry in motion,” so I’ll call it poetry that sometimes glides into lyric essay, which is also sometimes known as “something else.”

And remember when people used to say, “That’s something else!” as the highest form of praise?  Something beyond category or comparison?  Well, that’s how I mean it here.  I think Ghost/Landscape—its accordion of pages, its panharmonicon of possibilities—is truly something else—a superlative outcome of all these good consequences to generally unforeseen ideas.  There is no telling what else Darling and Gallaher might do.