I have to admit something. Despite supplying her with a steady stream of great children’s literature, the books my smart, seven-year-old daughter loves above all is a series of eyeball-scrapingly inane books called The Rainbow Magic Fairies.

She’s not alone. According to the publisher’s website, the 170+ Rainbow Magic books have sold 10 million copies. (A mysterious “Daisy Meadows” is credited on each glittery cover, and for a while I amused myself by picturing some publicity-shy authoress, a kind of Elena Ferrante for the Scholastic Book Order set. As it turns out, Rainbow Magic is churned out by committee under the aegis of the UK book packagers Working Partners Ltd.) How to explain the popularity of these conveyer-belt books? The plots are paltry. None of the characters possesses an iota of personality. The language has the texture of something written with a television blaring in the background, teeming with words like “nice” and “great.” That old saw that there are really only three stories in the world? Well, in the world of Rainbow Magic there is only one: Fairies have a problem created by oafish goblins. Two humans, an interchangeable pair of white girls called Rachel and Kirsty, solve the problem. Oafish goblins swear to strike again. The End.

So why do scores of young girls eagerly await each new shiny volume? One can see why fairies appeal to children: in centuries’ worth of pre-Disney folklore fairies have maintained reputations as mischievous shape-shifters, possessing powers that far outweigh their diminutive size—a comforting paradigm to the powerless and wee. Helen Nicholson notes in her essay “Postmodern Fairies” published in the History Workshop Journal, the Victorian craze for fairies in fine art reflected “a period of immense social upheaval and change.” I suspect this explains some of why fairy magic is so particularly potent to the pre-tween set: what is childhood if not one long period of immense upheaval and change? Fairies, after all, are transformative, liminal creatures. Disney’s ubiquitous Tinker Bell, that Kardashian of fairies, is part child and part sexy lady, hourglass figure squeezed into her trademark leafy jumper.

Wanting to show an interest in my child’s interests, but needing a break from the giggly breathlessness of Rainbow Magic, I began reading my daughter J.M. Barrie’s Peter Pan, promising that buried beneath the non-glittery cover we would find some authentic fairy magic. On actually rereading the book, however, I was reminded that Barrie’s Tinker Bell is a spiteful little sprite. Tinker Bell seems to me an amalgam of the Victorian fairy—those fleshy figures who skewed toward the erotic—and their earlier Celtic cousins who, as Canon J.A. Macculloch describes in his essay “Were Fairies an Earlier Race of Man”, were “voracious changelings” who stole children, killed with invisible darts, and frolicked with ghosts after dark. Barrie’s Tinker Bell isn’t a whimsical buddy, the cute little lady plastered by Disney on band-aids and rompers. She’s terrifying and amoral.

I also find my adult-reader-self distracted and disturbed by what happens to Wendy. Sure, Wendy goes to Neverland, but instead of getting to be a wild child forever like the boys she’s roped into servitude, expected to sew them pockets and make them a home. My daughter, on the other hand, finds this strand of the narrative to be very compelling. She relates much more to problem-solving Wendy than to trouble-making Tink. I found her response disconcerting—Wendy’s destiny is a domestic one, and while she enjoys her time flying around Neverland, her endgame is to become a mother. But Barrie’s narrative doesn’t really offer another compelling option, does it? In Barrie’s Victorian figuring, Tinker Bell may be full of mystery and mischief and magic, but she is jealous and insecure, haunted by the restlessness of a woman without a place in the world; while I love the classics for their stylistic qualities, I have to admit they don’t always offer my daughter the best role models for her adult life. 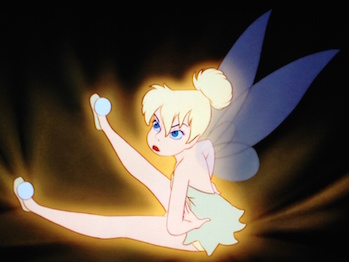 And what is childhood if not a dress rehearsal for being an adult? This is something kids understand naturally. They want to be adults, just like the about-to-leave-the-nursery Wendy does, even if along the way they want to push all the limits of decent behavior, like the churlish Tinker Bell. In fact, far from luxuriating in what we deem the innocence of childhood, most kids can’t wait to be in charge of something. Think about how much time kids spend pretending to be teachers, playing parent, bossing beleaguered dolls. Given the option of life in Neverland I think most kids, or girls anyway, would like Wendy choose going back home, where they get to eventually become women with agency over their own lives.

After all, childhood is no stroll through the 100-Acre Woods; a child’s psyche is rarely the meadow of daisies forgetful adults imagine. Peter Pan’s Neverland, constructed of child’s dreams, roils with lethal pirates and bloodthirsty beasts; even Rainbow Magic’s fairyland is under constant peril from the goblins with whom the fairies are locked in a futile Middle-East-style struggle for land. Childhood innocence is the parent’s ideal, not the child’s. While we revel in their pudgy toddlerdom, they are parading around the sandbox with buckets over their shoulders, crying, “It me purse! Like Mommy!”

And all the while, the specter of adolescence looms. Can you imagine going through your days subconsciously knowing that over the next decade or so your whole body was going to dramatically transform, whether you liked it or not? The only analogues in adulthood are pregnancy and illness. Or, I suppose, death. Unlike other fairy stories (Peter Pan included) every Rainbow Magic book contains at least one key scene where the human girls-next-door, Rachel and Kirsty, turn into fairies themselves. It’s always a weirdly erotic moment in the narrative: they giggle and squirm and touch each other’s arms, and exclaim that it feels so, so good. Then the fairy-girls fly around, graceful and free, undetectable to their parents. Once they possess magic powers they are able to immediately fix what the other fairies could not: It is precisely their blend of girlhood and fairy-power that saves the day. Isn’t this what every pre-adolescent girl dreams of? That she will transform into something lovely and wise and powerful, that she will be in control, she will save the world, and at the end of the day, if she wants to, she can turn back into herself and just be comfy at home with her BFF until her powers are called upon once again.

Any story about a fairy is a story about female power. Considered this way, it makes sense that this modern girl loves Rainbow Magic over all other fairy stories. It was never really about the magic or Fairyland. It was always about the transformation.

From a literary standpoint, I maintain that the Rainbow Magic books are utter garbage. But as transformation narratives that inspire girls to star in their own stories, I grudgingly admit they have very real merit. After all, I want today’s girls to know that, like Rachel and Kirsty, they will be able to transform into powerful, wise creatures when they need to, that powerful, wise creatures can wear cute outfits and giggle with their friends and feel good, and still save the world when it needs saving.