I wouldn’t have volunteered at The Rumpus for the past three years, if I didn’t believe in the power of words. But words ring hollow if they are not met with action. Outrage tweets and Facebook posts mean noting if you don’t march, call, email, filibuster, stand, sit-in, demand, riot, challenge, and vote. Today, Roxane Gay added another verb to that list: forfeit.

On January 25, Gay announced her decision to pull her forthcoming book How to Be Heard from the Simon & Schuster imprint TED. She made the decision after Simon & Schuster announced that it had struck a book deal with hate-speech monger and Breitbart editor (I’m sorry, was that redundant?) Milo Yiannopoulos.

Gay was due to turn in the book this week, but she couldn’t do it. She told BuzzFeed:

When the announcement about Milo’s book first came out, I was relieved because I thought I didn’t have a book with Simon & Schuster and tweeted something to that effect. Then I remembered my TED Book and that TED is an imprint of Simon & Schuster. I was supposed to turn the book in this month and I kept thinking about how egregious it is to give someone like Milo a platform for his blunt, inelegant hate and provocation. I just couldn’t bring myself to turn the book in. My editor emailed me last week and I kept staring at that email in my inbox and finally over the weekend I asked my agent to pull the book.

Though TED Books and Threshold are vastly different imprints, they both reside within Simon & Schuster and so I guess I’m putting my money where my mouth is. And to be clear, this isn’t about censorship. Milo has every right to say what he wants to say, however distasteful I and many others find it to be. He doesn’t have a right to have a book published by a major publisher but he has, in some bizarre twist of fate, been afforded that privilege. So be it. I’m not interested in doing business with a publisher willing to grant him that privilege. I am also fortunate enough to be in a position to make this decision. I recognize that other writers aren’t and understand that completely. 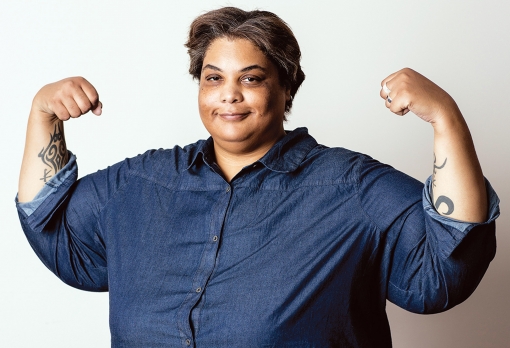 Gay’s principled stand comes in the middle of a week that is overflowing with bad news—the President has attempted to gag order the EPA, the National Parks, and other government entities. He’ll be subjecting science to political review. He is also seeking to implement a Muslim ban, ended the Flint crisis investigation and is trying to restart the Keystone Pipeline project, which violates sacred Native land. What else? I’m sure I forgot something. It’s a lot. It’s awful. But Gay’s stand is an example that sometimes resistance doesn’t mean shouting louder, sometimes it means pulling away.

And for those of us who support her and this principled move, let’s show her with more than retweets and emotjis of power. Let’s buy some of her books, okay? Or maybe just buy some books from small presses like Unnamed Press, Alternating Current Press, Catapult, Graywolf, Barrelhouse, and Coffee House Press. (Please leave other suggestions in the comments, and visit Small Press Distribution to find more books from indie presses.) It’s foolish to think we can punish Simon & Schuster with our pennies, but we can support principled art wherever we see it. And that is more important than ever now. Today, I bought three more copies of Bad Feminist and pre-ordered Hunger. I’m going to give them to friends or maybe casually leave them inside a few Evangelical churches around my neighborhood.

Look, I don’t think capitalism is the way out of this mess. We cannot buy our way to freedom or end fascism with cool swag and great literature. We cannot purchase the resistance. But we can show our support when someone takes bold action, as Roxane did this week.