A couple of times a year, I get together with several friends who all once lived in the same neighborhood in San Francisco. I now live in Chicago, another set left for Boston, and only Jill remains in the Bay Area. We were all sitting around at a recent reunion and Jill was talking about the fact that our old neighborhood, still hers, full of expensive wooden Victorians, has a fire truck that patrols at all times always out of the barn.

“We sure do love our firefighters, don’t we?” she asked us.

I told her that since I hadn’t lived in San Francisco for fifteen years, I must forfeit the right to use The Municipal We.

I’ve been thinking about the pronoun “we” a lot lately. I teach a creative writing course in which we look at forms meant to be spoken out loud, but are also considered literature—speeches, sermons, storytelling, prayers, boasts, slam poetry, and lectures. When we discuss declarations and manifestos, we consider the difference between them, that being that declarations declare, declarations call out something that is already there, plain as the nose on your face—both our Declaration of Independence and the Seneca Falls Declaration stand on the sentence, “We hold these truths to be self-evident.” There’s that we again, the Patriot We, the Nationalist We, the Pep Rally We. We got spirit, yes we do, we got spirit, how about you?

The We in a manifesto differs, for a manifesto makes something manifest that never existed before: the Communist Manifesto, yes, but the statements of all those artists, the futurists and surrealists, the modernists who wanted to make it new, and all the crazy ones from the Unabomber’s caution about industrial society to Charlie Sheen’s 11-point manifesto for winning to Lululemon’s yoga pant manifesto (children are the “orgasm of life,” apparently). Manifestos are more I than We, and a noisy, hilarious We at times, like a misfiring car alarm on a Saturday morning, waking up the irritated neighborhood.

I have mixed feelings about using “we.” I have bad memories of being knocked down by grade-school bullies who linked arms and ran me down while chanting, “We don’t stop for traffic.” And I’m a bit terrified of the, “We don’t like your kind coming around here,” which has become a troublingly common We of late. I have lived in Chicago for fifteen years and I don’t think I have ever used the Municipal We there, though it feels more like home to me than San Francisco ever did, even more than my hometown felt like home. I will chant the Creed We of “We believe in one God, the Father, the Almighty.” I am surprised at how choked up I can get when I declare an Alma Mater We, as We will sing thy praise forever.

Northwestern University, my alma mater and employer (there it is), has two fight songs, “Go U Northwestern,” which we sing when we get a touchdown, and one called “Push On,” which is what we sing when don’t get a first down. “Push on, Northwestern, we’ll always stand by you,” we promise. I was at a game last Saturday and we were not winning and my old friend Jenny was watching far away on television. We had been in marching band together back in the 1980s when Northwestern broke the record for most consecutive losses. The Loser We will bind people together for life. Jenny and I know “Push On” much better than “Go U Northwestern.” Saturday, watching the loss in the bleachers, I got a foreboding text from her, in another state: “Gosh, we sure are playing ‘Push On’ a lot.”

There is the Royal We of queens and popes and threatening law firms. And the Nuptial We of married couples is, as Joan Didion described it, the classic betrayal, though the classic betrayal itself can be betrayed. When my mother tells my father, “We Need to Redecorate the Guest Room,” she doesn’t mean we, she means you, and when my father asks my mother, “Are We Out of Beer?” he doesn’t me mean we, he means I. Sometimes, there was never a We involved in the first place.

And there is the Memorial We. The Memorial We is a We that connects the present and the absent. I feel the Memorial We most strongly around Arlington or the Vietnam Memorial or the AIDS quilt, where most of the We are far away, but the multitude of names surrounds us, where pronouns become proper nouns, names, thousands of names.

It’s not coincidental, I think, that most of the secular and sacred saints we venerate now went charging against the grain of the Municipal We. They are the mad ones who make the manifestos. Janis Joplin was not loved in her native Port Arthur, Texas when she was alive, but they sure like her now, judging from the big statue in the town’s front yard. The Little Rock Nine were threatened for daring to integrate Arkansas schools, but now the high school that hated them is a museum in their honor, and a place to which civil rights advocates make pilgrimage every year.

This year, pilgrims marched to the grave of the late Portuguese diplomat Aristide de Sousa Mendes, who saved 30,000 Jews from the Nazis, an estimated 28,800 more than Schindler, much more famous for his list. Because de Sousa Mendes consciously refused to obey the orders of Salazar and the Fascist We by frantically issuing visas to those 30,000 people, he was found guilty and dismissed from the diplomatic service. He was stripped of his pension and lived in poverty until his death in 1954. I have, as a Catholic, thought quite a bit about the saints of my religion. I imagine that in those early days of the Church there must have been in every village an especially marvelous person, a person who helped the We of us, maybe led the community, maybe would fix your ox-cart and wouldn’t accept payment, gave extra tomatoes from her garden, told a good story. Then that person would die, and they would leave a huge, gaping hole in the fabric of the village, and the people would miss her so keenly that they just knew that person was close to God.

I used to think God was probably too vast for the imagination of the early Christians, but now I know that God is too vast for my imagination, else what’s a heaven for? God kept spilling out of the mind’s frame, denying his faithful a sense of perfection, of wholeness, by putting it in heaven. What makeshift mosaic one could construct of God’s heaven came in the form of the good people we all missed, the Memorial We.

Harvey Milk, the unofficial saint of gay freedom, seemed to have predicted his martyrdom, and made a moving taped speech “to be played in the event of my assassination,” full of the object for of “we,” the “us”:

I ask this… If there should be an assassination, I would hope that five, ten, one hundred, a thousand would rise. I would like to see every gay lawyer, every gay architect come out—if a bullet should enter my brain, let that bullet destroy every closet door… Because it’s not about personal gain, not about ego, not about power…. it’s about the ‘us’s’ out there. Not only gays, but the Blacks, the Asians, the disabled, the seniors, the us’s. Without hope, the us’s give up—I know you cannot live on hope alone, but without it, life is not worth living. So you, and you, and you… You gotta give ‘em hope.

This is how an I becomes a We, how a minority becomes a majority. They are not all dead—some are far more elusive than that. Here’s the story of a secular saint, perhaps an accidental saint, who wants to remain anonymous. My friend Kaye was recently at a cocktail party of old lefties, attended, in particular, by a lot of old Chicago Weather Underground activists. Many of them are teachers now. You may only remember them as planters of bombs, but they were also very active in helping 1-A dissenters from going to Vietnam. Kaye was talking to some of these old activists and thanked them, with a toast, as a group, because her husband was one of those the Weather Underground helped out.

“It was before I met him,” she told them, standing in a circle, sipping wine, “before he had his career as a doctor and before he gave me two lovely children. They told him, ‘You don’t want to go? Okay then. We are going to break into the recruiting office and we are going to steal your file.’” (These were the days before computers, so if your manila folder disappeared, it was gone forever.) “We will give you a call when the deed is done. When we do, don’t contact the recruitment office ever again. Go on with your life.’ And then,” said Kaye, “he got the call, and he never looked back.”

A short woman at the edge of the party circle behind Kaye said, “Oh, that was me.”

Kaye turned around and looked at her, “What do you mean, that was you?”

“Well, I wasn’t officially in the Weather Underground, but the boy I had a crush on was, and I wanted to impress him. I was the only one small enough to crawl through the transom in the draft office so they pushed me through and I pulled all the Chicago files and destroyed them. That guy was so impressed he finally took me out on a date.”

The woman drained off the rest of her wine and said, “Yeah, probably. I just wanted a boyfriend.” And then she slipped out of the circle and into the crowd, never giving Kaye her name. 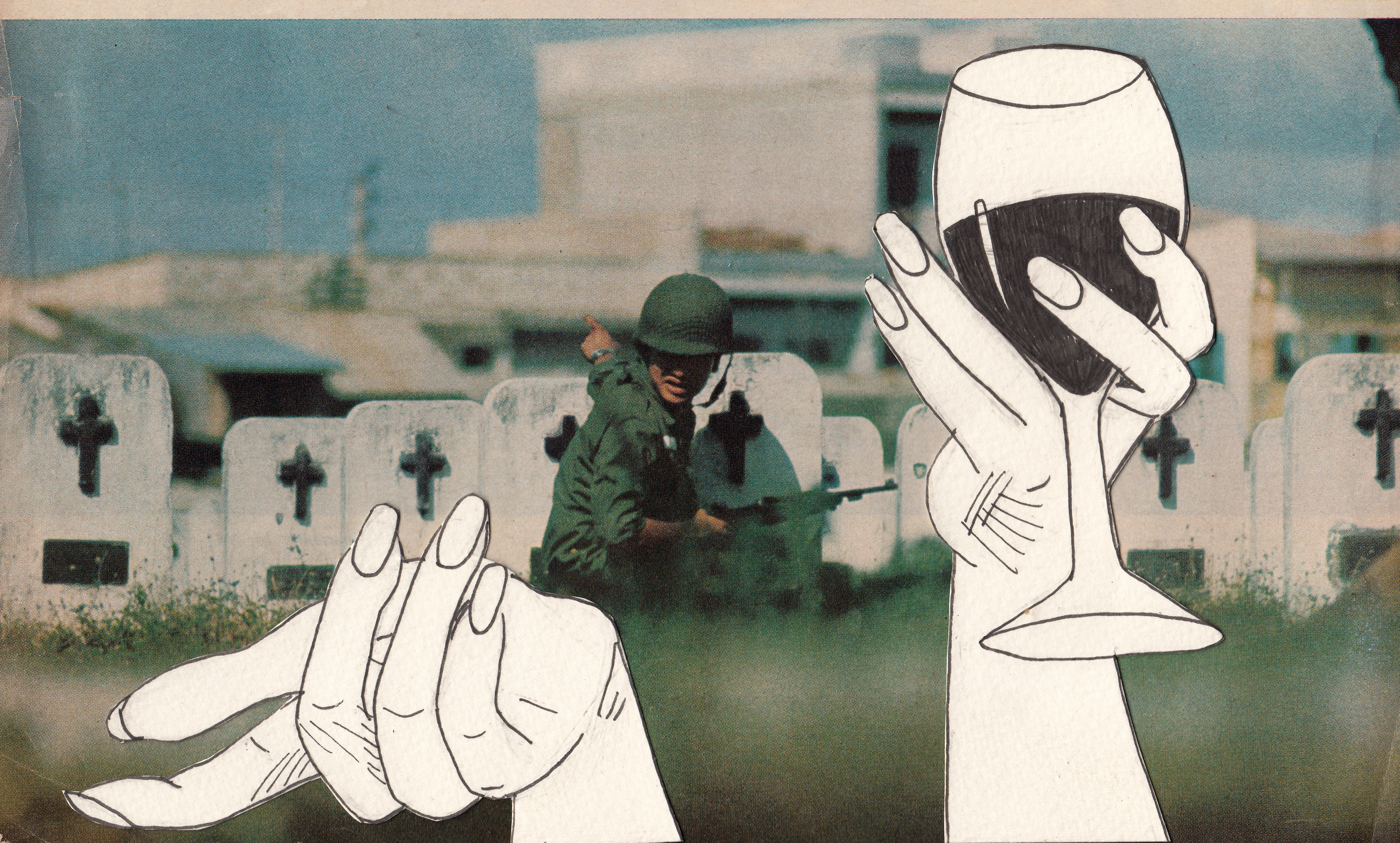 “I kinda want to talk more to her, but really, why should I? Why do we want more from some people who already gave us so much?”

Perhaps we don’t want more. Perhaps we just want to give thanks. That is the essence of the Pilgrim We, I suppose.
I dream of a place where the “I” and the “we” are at peace with one another, where the spiritual and the religious, the left and the right, the We and the They, can all hang together in a great inclusive old-school democracy. This might have been the dream of a secular nation that our founding fathers tried to create. I firmly believe in the separation of church and state, but I also believe in the potential good in both of them, separately.

My oldest friend Scott and I were talking the other day about the launch of another one of Elon Musk’s SpaceX rockets. “His shareholders must be very happy,” grumbled my friend. We both agreed: to many, Elon Musk is a new sort of hero, but for us, not quite a secular saint. Scott reminded me, “When NASA rocketed to the moon, we all went.” We still believe, spiritually if not religiously, in the messy experiment of “The Democracy We” after all these years.

Brian Bouldrey has written eight books, most recently Honorable Bandit: A Walk Across Corsica, and edited seven anthologies, including Inspired Journeys: Travel Writers in Search of the Muse, published this year. He teaches creative writing and literature at Northwestern University. More from this author →