Seven months ago, a billionaire bragged on camera about sexually assaulting women and your parents’ generation elected him ruler of the free world.

For the young and the brave and the smart, especially for those who weren’t yet able to vote in the 2016 election, it’s easy to feel like the world has gone completely mad. That your voice doesn’t matter. That you may as well jump feet-first into The Handmaid’s Tale and hold your breath until 2020.

But don’t lose hope. Our voices are our weapons, and in the books below, young women—including PoC, LGBTQIAA, and nonbinary writers, refugees, and Muslims—speak, shout, and scream the truths that you are not alone, you are not forgotten, and you are not done fighting.

Your voice counts. Now speak (and read!) out.

Hole in the Middle by Kendra Fortmeyer
Girls are taught to feel our bodies are flawed from the time we can walk, and Morgan Stone is no exception. Her body is different, with a hole right through the middle—a mysterious deformity that the world is eager to define for her. Funny, snappy and feisty, Morgan sets off to bare all and learn what’s really missing, loudly questioning our society’s beauty norms along the way.

Ms. Marvel by G. Willow Wilson
Sixteen-year-old Kamala Khan isn’t just Marvel’s first Muslim teen girl superhero—she’s a badass voice of her generation. Check out Ms. Marvel #10, where she stands up against a villain who’s made teens to feel so worthless they volunteer to become human batteries: “Our generation has to matter. If we don’t, there’s no future worth saving!” Amen. The Hate U Give by Angie Thomas
Starr Carter knows how to live in her poor neighborhood where her father owns a grocery store and she knows how to live in her preppy high school where she’s one of the only black students. When a police officer shoots and kills her unarmed friend Khalil, Starr must decide how to continue to live in both of her worlds and be a voice for Khalil. An essential novel about all the ways black lives matter. The Rookie Yearbook edited by Tavi Gevinson
Twenty-one-year-old Tavi Gevinson is an advocate for youth voice and culture, which she promotes in youth-written and youth-driven Rookie magazine. Check it out for teen-penned essays on feminism, coming out, and the passions that make us who we are (and submit your own!). Juliet Takes a Breath by Gabby Rivera
Juliet has a few things to figure out. Like how to live in Portland instead of the Bronx. And how to be an intern for her favorite author. And how to help her Puerto Rican family deal with with the fact that she’s gay. This is a must-read for learning more about the importance of intersectional feminism. Roxane Gay called it “exuberant and gorgeous,” so what are you waiting for? 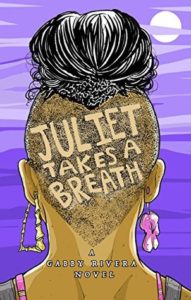 The Miseducation of Cameron Post by emily m. danforth
Cameron Post’s life comes to a crashing halt when her conservative aunt sends her to an ultra-religious anti-gay conversion camp. And with a vice president who believes in shock therapy to “treat” homosexuality, sadly relevant. The movie’s coming out this fall, so get ahead of the trend. Exit, Pursued By a Bear by E.K. Johnston
Hermione Winters (yes, her parents were Harry Potter nerds) wakes after a party to find herself the victim of a rape she doesn’t remember. Hermione could succumb to the darkness—but instead, with brave determination and honest communication, rallies a loving community around her. A powerful rape survival story to make you believe in a better world. Persepolis by Marjane Satrapi
A graphic memoir of a girl growing up in Iran during the Islamic Revolution. Satrapi’s story is a blend of the personal and political—equal parts ordinary, day-to-day home life and intense political turmoil. In a world in which it’s so easy to dehumanize and other, especially those who live in Arab states, this is the book that reminds us that we’re all just people, everywhere. Beyond Magenta: Transgender Teens Speak Out by Susan Kuklin
This book features interviews, photographs, and the true stories of six transgender and nonbinary teens in various modes of gender expression. A must-read for any of us grappling with self-definition: which is to say, all of us. I Am Malala by Malala Yousafzai and Christina Lamb
You’ve probably heard Malala’s story before, but if you haven’t taken the time to read her memoir, we highly recommend that you check it out. The historical and cultural narrative of Pakistan makes Malala’s fierce defense of education rights for girls seem that much more impressive in context. Pro-tip: Archie Panjabi narrates the audiobook and it’s wonderful. The Unbeatable Squirrel Girl Beats Up the Marvel Universe by Ryan North and Erica Henderson
Doreen Green is the best superhero because 1) She’s a computer science major, 2) She believes in solving problems by talking them out instead of punching them out, but she’s also hella strong, 3) She has a totally rad roommate named Nancy, and 4) She’s a girl with the proportional strength and tail of a squirrel. Squirrel Girl will leave you feeling like you can take on the world. It’s Not Like It’s a Secret by Misa Sugiura
Sixteen-year-old Sana learns that coming out isn’t the hardest part—it’s what follows that gets crazy complicated. More than just a queer romance, this book deftly navigates the nuances of racism to take you straight to the heart of intersectionality (and makes your heart beat faster, too). The Upside of Unrequited by Becky Albertalli
Molly Peskin-Suso has twenty-six unrequited crushes under her belt, but when her sister gets a new girlfriend, Molly starts to wonder how to turn a crush into something more. She’s also preoccupied with the wedding planning for her two awesome moms. Molly has anxiety and throughout the course of the book, she learns how to better cope with it while never compromising her true self. Reading this book is like spending time with your very best friend: it both comforts you and pushes you to be your best self. If I Was Your Girl by Meredith Russo
Amanda Hardy just wants to fit in at her new school. Things seem to be going really well with this cute guy, too, but she’s not sure how he’ll react when he finds out that Amanda is trans and has gone through gender reassignment surgery. This novel is less about the initial steps of transitioning and more about what comes next, a story we can never hear enough. Written by a trans author, this book has a beautiful #ownvoices authenticity. 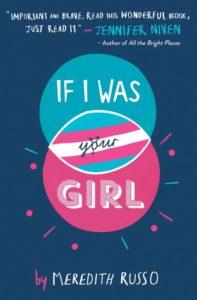 Gabi, a Girl in Pieces by Isabel Quintero
Whether Gabi Hernandez is scribbling about slut-shaming, buying condoms, her dad’s meth addiction, caring for her pregnant bestie, or beating up douchebag boys, she’s the best friend you wish you had—frank, funny, and figuring it all out. Plus, she shares a manifesto about how female body parts aren’t “dirty;” they’re just bodies. Extra points for the vulva on the cover. Gretchen Alice is a youth services librarian outside of Houston. She could talk endlessly about young adult literature. You can find her on twitter @gretchenalice. Kendra Fortmeyer is a writer, feminist and aspiring recluse with work in The Toast, Best American Nonrequired Reading and elsewhere. She tweets @kendraffe. More from this author →