It’s been quite a week in American policymaking and politicking. Among the horrible things the current administration is doing is an attempt to protect white students from discrimination. Or, in reality land where we say what we mean: end affirmative action and further limit access to higher education.

The campus novel is a beloved, if somewhat worn, genre, but it is also a too-white one. Among the campus novels on this list, only a handful are by writers of of color or present an alternative to the small liberal arts college environment. It’s likely no coincidence that those campuses remain disproportionately white. To argue that white students are being discriminated against by policies meant to move us toward equality is to miss the point entirely; to argue that an administration that might make such an argument isn’t racist is to deny the truth.

College is a rite of passage for many young people, and it is also a part of the American Dream for many families. Here is a list of books that tackle those fraught four years: some are campus novels, some turn the tropes of campus novels on their heads, some are nonfiction looks at the state of the academy today, and some look at the alternative paths to or instead of college that one might take.

The Secret History by Donna Tartt
Under the influence of their charismatic classics professor, a group of eccentric misfits at an elite New England college discover a way of thinking and living that is a world away from the humdrum existence of their contemporaries. But when they go beyond the boundaries of normal morality they slip gradually from obsession to corruption and betrayal, and at last, into evil. For Discrimination: Race, Affirmative Action, and the Law by Randall Kennedy
What precisely is affirmative action, and why is it fiercely championed by some and just as fiercely denounced by others? What are its benefits and costs to American society? Randall Kennedy gives us a concise and deeply personal overview of the policy, refusing to shy away from the myriad complexities of an issue that continues to bedevil American race relations. The Idiot by Elif Batuman
The year is 1995, and email is new. Selin, the daughter of Turkish immigrants, arrives for her freshman year at Harvard. Almost by accident, begins corresponding with Ivan, an older mathematics student from Hungary. At the end of the school year, Ivan goes to Budapest for the summer, and Selin heads to the Hungarian countryside, to teach English in a program run by one of Ivan’s friends. Selin’s summer in Europe does not resonate with anything she has previously heard about the typical experiences of American college students, or indeed of any other kinds of people. For Selin, this is a journey further inside herself: a coming to grips with the ineffable and exhilarating confusion of first love, and with the growing consciousness that she is doomed to become a writer. The Art of Fielding by Chad Harbach
At Westish College, a small school on the shore of Lake Michigan, baseball star Henry Skrimshander seems destined for big league stardom. But when a routine throw goes disastrously off course, the fates of five people are upended. The Marriage Plot by Jeffrey Eugenides
It’s the early 1980s. In American colleges, the wised-up kids are inhaling Derrida and listening to Talking Heads. But Madeleine Hanna, dutiful English major, is writing her senior thesis on Jane Austen and George Eliot, purveyors of the marriage plot that lies at the heart of the greatest English novels. As Madeleine studies the age-old motivations of the human heart, real life, in the form of two very different guys, intervenes. As all three of members of the love triangle face life in the real world after graduation, they will have to reevaluate everything they have learned. Uncommon Women and Others by Wendy Wasserstein
Alumnae of Mount Holyoke College (Wasserstein’s alma mater) meet for lunch one day in 1978 and talk about their time together in college. The play is thus a series of flashbacks to the 1972-1973 school year, as seven seniors and one freshman try to “discover themselves” in the wake of second-wave feminism. Welcome to Braggsville by T. Geronimo Johnson
T. Geronimo Johnson has written an astonishing, razor-sharp satire. He skewers issues of class, race, intellectual and political chauvinism, Obamaism, social media, and much more. A literary coming-of-age novel for a new generation, written with tremendous social insight and a unique, generous heart, Welcome to Braggsville reminds us of the promise and perils of youthful exuberance, while painting an indelible portrait of contemporary America. Pictures from an Institution by Randall Jarrell
Beneath the unassuming surface of a progressive women’s college lurks a world of intellectual pride and pomposity awaiting devastation by the pens of two brilliant and appalling wits. Randall Jarrell’s classic novel was originally published to overwhelming critical acclaim in 1954, forging a new standard for campus satire. The Group by Mary McCarthy
McCarthy portrays the lives of eight Vassar graduates, known simply to their classmates as “the group.” An eclectic mix of personalities and upbringings, they meet a week after graduation to watch Kay Strong, the first of the group, be married. After the ceremony, the women begin their adult lives—traveling to Europe, tackling the world of nursing and publishing, and finding love and heartbreak in the streets of New York City. Through the years, some of the friends grow apart and some become more entangled in each other’s affairs, but all vow not to become like their mothers and fathers. It is only when one of them passes away that they all come back together again to mourn the loss of a friend, a confidante, and most importantly, a member of the group. The Collective by Don Lee
In 1988, Eric Cho, an aspiring writer, arrives at Macalester College. On his first day, he meets a beautiful fledgling painter, Jessica Tsai, and another would-be novelist, the larger-than-life Joshua Yoon. Brilliant, bawdy, generous, and manipulative, Joshua alters the course of their lives, rallying them together when they face an act of racism. As adults in Cambridge, Massachusetts, the three friends reunite as the 3AC, the Asian American Artists Collective together negotiating the demands of art, love, commerce, and idealism until another racially tinged controversy hits the headlines, this time with far greater consequences. The Last Professors: The Corporate University and the Fate of the Humanities by Frank Donoghue
Bypassing the distractions of the culture wars and other “crises,” Donoghue sheds light on the structural changes in higher education—the rise of community colleges and for-profit universities, the frenzied pursuit of prestige everywhere, the brutally competitive realities facing new PhDs —that threaten the survival of professors as we’ve known them. Summer of the Cicadas by Cole Lavalais
A fragile Viola Moon begins her freshman year at A&M University after a compulsory stay at a mental health center, hoping to reinvent herself by escaping south to a small black college. Once Vi is uncomfortably situated on campus, the ghost she imagined she could outrun soon becomes her constant companion. Vi is convinced that the only way to put the ghost to rest and regain her sanity is to pursue a man who is just as precariously positioned in his own ancestral angst. When that ends disastrously, she obsessively searches for the father that she can neither clearly remember nor completely forget. Stoner by John Williams
William Stoner is born at the end of the nineteenth century into a dirt-poor Missouri farming family. Sent to the state university to study agronomy, he instead falls in love with English literature and embraces a scholar’s life, so different from the hardscrabble existence he has known. 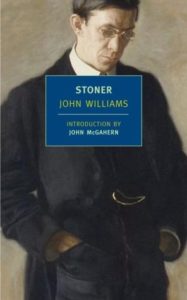 A Piece of Cake by Cupcake Brown
Unlike any memoir you will ever read, A Piece of Cake is a redemptive, gripping tale of a resilient spirit who took on the worst of contemporary urban life and survived it. It is also the most genuinely affecting rollercoaster ride through hell and back that you will ever take. The Opposite of Loneliness: Essays and Stories by Marina Keegan
An affecting posthumous collection from the talented young Yale graduate whose title essay captured the world’s attention in 2012 and turned her into an icon for her generation. Marina Keegan’s star was on the rise when she graduated magna cum laude from Yale in May 2012. She had a play that was to be produced at the New York International Fringe Festival and a job waiting for her at the New Yorker. Tragically, five days after graduation, Marina died in a car crash. Even though she was just twenty-two when she died, Marina left behind a rich, expansive trove of prose that, like her title essay, captures the hope, uncertainty, and possibility of her generation. 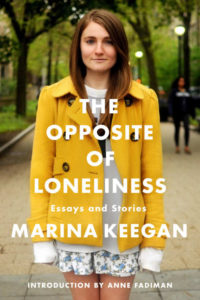 Wonder Boys by Michael Chabon
Chabon presents a hilarious and heartbreaking work—the story of the friendship between the “wonder boys”—Grady, an aging writer and professor who has lost his way, and Crabtree, whose relentless debauchery is capsizing his career. 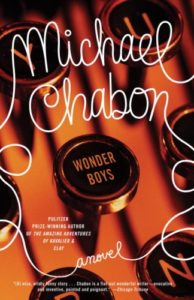 University, Inc.: The Corporate Corruption of Higher Education by Jennifer Washburn
Jennifer Washburn, a scholar and journalist, reveals how the growing influence of corporations over universities compromises the future of all those whose careers depend on a university education, and all those who will be employed, governed, or taught by the products of American universities. Loner by Teddy Wayne
David Federman has never felt appreciated. An academically gifted yet painfully forgettable member of his New Jersey high school class, the withdrawn, mild-mannered freshman arrives at Harvard fully expecting to be embraced by a new tribe of high-achieving peers. Initially, however, his social prospects seem unlikely to change. Then he meets Veronica Morgan Wells. Struck by her beauty, wit, and sophisticated Manhattan upbringing, David becomes instantly infatuated. Determined to win her attention and an invite into her glamorous world, he begins compromising his moral standards for this one great shot at happiness. But both Veronica and David, it turns out, are not exactly as they seem. Loner turns the traditional campus novel on its head as it explores ambition, class, and gender politics. Dear Committee Members by Julie Schumacher
Jason Fitger is a professor of creative writing and literature at Payne University, a small and not very distinguished liberal arts college in the Midwest. His department is facing draconian cuts and squalid quarters, while one floor above them the Economics Department is getting lavishly remodeled offices. His once-promising writing career is in the doldrums, as is his romantic life. In short, his life is a tale of woe, and the vehicle this droll and inventive novel uses to tell that tale is a series of hilarious letters of recommendation that Fitger is endlessly called upon by his students and colleagues to produce, each one of which is a small masterpiece of high dudgeon, low spirits, and passive-aggressive strategies. Savage Inequalities by Jonathan Kozal
For two years, beginning in 1988, Jonathan Kozol visited schools in neighborhoods across the country. He spoke with teachers, principals, superintendents, and, most important, children. What he found was devastating. Not only were schools for rich and poor blatantly unequal, the gulf between the two extremes was widening—and it has widened since 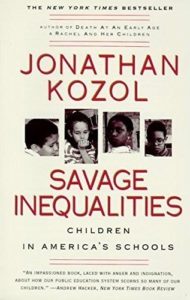