In Patty Yumi Cottrell’s first novel, Sorry to Disrupt the Peace (McSweeney’s, March 2017), the narrator investigates the suicide of her adoptive brother. Helen is thirty-two. Her brother was twenty-nine. “As my sobbing ebbed, I began to search my mind for the cause of his life-taking. Were there clues? There must have been clues. There must have been clues and signs hiding all over the place, the place of his life.” Helen leaves New York City, where she works with troubled young people, flying back to Milwaukee to her parents’ home where her brother lived, which she calls “the Catholic fortress.” There, she attempts to learn more about the circumstances leading to her brother’s death.

Sorry to Disrupt the Peace is an enthralling, curt, brutal, beautiful novel. There is a strangeness to the sentences, a tone that seems clinical but also extremely sensitive: “I began to worry my roommate Julie would walk in and see me staining her new pillows with the fluids of my grieving. The eye is a terrible organ, I thought as I glanced around the apartment for a box of tissues.” It’s the kind of novel I’d want to read in a greenhouse, uninterrupted, alone—somewhere where plants are creeping around me. Instead I read it on the plane and in an airport. The experience of traveling was much enhanced.

Cottrell’s work has appeared in BuzzFeed, The White Review, BOMB, and other places. We did the interview over email.

Rumpus: What was the experience of beginning this book?

Cottrell: When I started this book, I heard in my head the theme song from Murder, She Wrote. The show always put me to sleep, in the best way. It doesn’t matter what happens in the middle, because by the end of the episode, the mystery is solved. There’s something beautiful about that. So I had that theme song in my head, and there was this painful void in my life at the time, and I decided to look into it. The [literary] voice was a result of drawing close to the void; it was resonant like a gong, very clear.

When I wrote the first sentence of the book, I was ecstatic, practically tripping. Of course the experience of writing the rest of the book was another matter. You can’t sustain that high over the course of an entire novel. For me, writing the beginning of this book was like the high pitch of a new romance when you’re delirious and everything is elevated. You can’t sustain that. At a certain point, things die down and become normal. I’ve decided I like when that happens.

Rumpus: How did you keep going, once you got past those first delirious pages?

Cottrell: I stopped writing for a long time, actually. I had a handful of chapters, then I set the book aside, and moved across the country from New York to Los Angeles. I worked at a full-time job for awhile. I didn’t think about finishing this book until March 2016. I had two weeks off, and I wrote the majority of it over that period. What helped was reading a lot of books by dead people, not thinking about writing my book, watching the NBA, chopping vegetables, driving around Los Angeles, talking to friends, seeing a Korean adoptee therapist, listening to Aphex Twin, going to art museums.

I accessed the enraptured state again, but I don’t like to analyze it too much. I prefer to leave it mysterious, because it is. So, how do you reach an enraptured state while writing? Honestly, I think an enraptured state is only possible when you burn everything in your life without leaving toxic traces. Then you can access your thoughts with clarity. 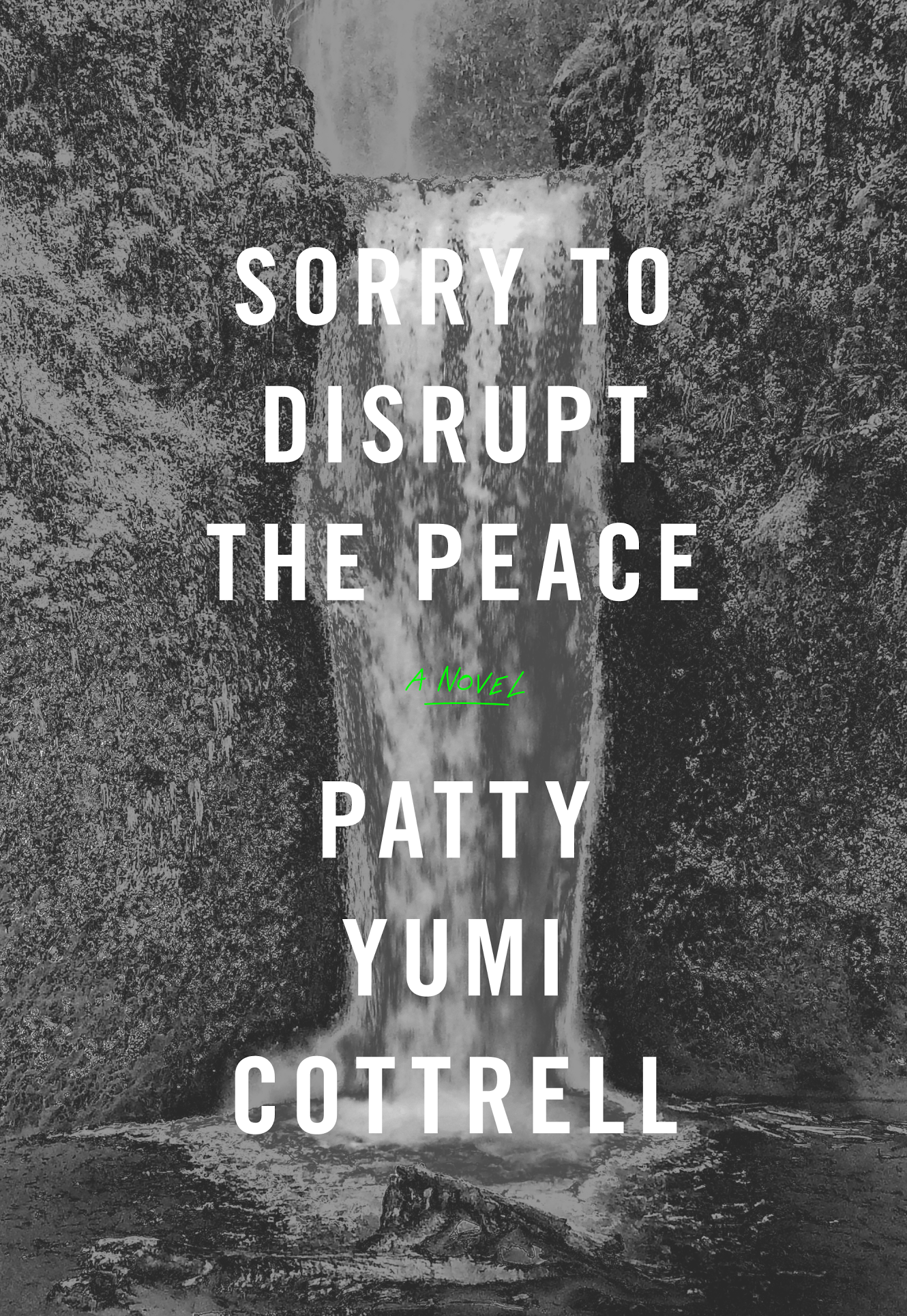 Rumpus: I love how Helen, your main character, despises photography. I don’t want to read too much into it, but it seems to me like photographs are just one of many ways the world insists on a kind of oppressive dishonesty.

Cottrell: Helen is a relentlessly honest and delusional narrator. It’s my understanding that to her, photography is made up of surfaces; she’s more interested in what’s teeming beneath the surface of our horrifying, disgusting lives. I don’t agree with this stance at all. I’m very moved by photography and writers thinking through photography (John Berger, Janet Malcolm, Susan Sontag). I do think the daily visual assault of images via social media can be exhausting and unnecessary.

Rumpus: I want to talk about this passage, which comes directly after some stranger sticks his tongue in her mouth: “I was fine with genitalia in my face and blow jobs and spitting out their sperm, I was fine with rimming, I made my peace with it, and I was so angry. Underneath my peace there was an anger, an ugly anger, the force of it was formidable, and I was the one who had to live with it.” There’s sometimes a feeling of being constantly marauded, when you’re a woman. Or were you not thinking about being a woman at all? How do you see this anger operating in the book? Helen seems to be saying that sex is disgusting and repulsive

Cottrell: I mean, I’m always thinking about what it means to be a woman, especially since whether or not I’m a woman seems to be questioned at least once a week. My experience with harassment or being “constantly marauded” has less to do with unwanted advances by repulsive men, and more to do with a small percentage of strangers who are somehow unable to ascertain my gender, which is actually none of their business. I suppose a feeling of anger permeates the book and, at times, my life. And I wish I didn’t feel so angry or enraged, but occasionally these emotions can be productive. It’s sort of like the experience of being an obsessive person. Sometimes it’s not very useful in daily life, but every once in awhile it can be helpful, for example, in terms of writing a book or making art.

Rumpus: In the Guardian’s review of Sorry to Disrupt the Peace, there’s a description of Helen as “unhinged one moment, then astutely observant or empathic,” which I disliked. Did you feel that Helen was unhinged? How would you describe her? Were you ever thinking of her as an “unreliable narrator”?

Cottrell: The word “unhinged” implies some kind of mental breakdown or collapse. I don’t think she’s mentally ill. I would describe her as delusional and strong. I wasn’t thinking of her as exclusively unreliable or mentally ill. I’ve said before that her perspective is tilted at an odd angle. There’s nothing wrong with that. When you go through a traumatic time, life can become messy and confusing. I empathized with that reaction. Helen believes in what she’s doing. She seems secure with who she is; it’s the murk of her current life situation that’s destabilizing.

Rumpus: How did your parents react to the book?

Cottrell: My dad read it and loved it. He called it a page-turner. I was a little worried about how they would receive it, but my parents read fiction. They understood.

Rumpus: If you don’t mind, could talk about your brother, who committed suicide? How did the experience of losing him affect how you approached writing this book?

Cottrell: Recently, I read Catherine Lacey’s new novel, The Answers, which is about people struggling to answer impossible questions. I like this line: “How best to love? How to know anything, for certain, in another’s heart? Such a serious thing we are doing, and no one really knows how to do it.”

Rumpus: Do you do other forms of art besides writing?

Cottrell: I like walking. I think dreaming is an art form, especially lucid dreaming. When I was in my early twenties, I used to make music, but I don’t do that anymore.

Cottrell: I love lucid dreaming, but it requires a lot of attention upon waking. It helps if you start to write down your dreams. My girlfriend and I were doing that when we first got together. Falling in love feels like being in a lucid dream; everything becomes very clear, and all of that extra shit falls away.

Rumpus: I read in your Paris Review interview that your previous writing was more fantastical, and that in this novel you were after more of a “curdled realism.” Can you describe the kinds of stories you were working on before Sorry to Disrupt the Peace?

Cottrell: My short stories tend to be absurd, harsh, and decrepit. They’re short, probably closer to prose poems, because I try to write them quickly, in one sitting. They remind me of clouds. You see them, then you forget about them. Who can remember a cloud from a few months ago? I can’t. My short stories are like that.