While surfing as teenagers one summer, my friend David and I spotted a baby shark heading for the shallow waves where a father was playing with his two sons. The dad grabbed his youngest child but couldn’t reach the older one, so David sprinted through the water, picked the boy up, and hit the shark on the nose. Whenever I tell this story, I’m always interrupted when I come to this part. “Did that really happen?” the listener will ask. “Of course!” I say but if I’m being honest, I’m not sure. I think there was a shark—but maybe it was just a large fish. I’ve told the story so many times that it is all a little blurry; in my memory, there’s a lump in the water that, at first glance, resembles a shark. And then it becomes one—sharp-finned and grey, with a pointy nose and little teeth. And now, I honestly can’t tell you if it ever wasn’t.

My love of storytelling started at a young age; as a four-year-old insomniac, I conspired to keep my father talking when he came to tuck me in and tell me a tale each night. A house painter at the time, exhausted from long days spent atop ladders in the muggy Virginia heat, my dad would inevitably fall asleep at a crucial point in the story.

“Oh, right,” he’d mumble, opening his eyes. “So Jeffrey walked into the cave where the other vampires were waiting.” My father was never one to be accused of being boring and, though never raunchy, his stories often featured somewhat questionable content. I remember a particularly frightful night when we were in the middle of a story about a lovesick vampire, Jeffrey. After finally winning over Naomi, a human woman he had been wooing for several weeks, the poor bloodthirsty fool stumbled upon a disgruntled psychopath who proceeded to hack Jeffrey to death.

“Good night,” my dad said, giving me a kiss and retreating downstairs to practice guitar. Good night? I lay awake, eyes wide, stiff with fear and disbelief. Jeffrey was dead? After all those nights imagining him traipsing through the forest searching for Naomi, satisfying himself by sucking the blood of small woodland critters lest he become too hungry and accidentally maim a human and now, months later, Jeffrey lay dead and my father sat in the living room playing guitar? I unraveled myself from the covers and crept downstairs, careful to skip the two squeaky steps. “Why are you sad, sweetie?”

“I’m sad Jeffrey’s dead.” I crawled onto his lap and he put the guitar down to make room for me.

“Do you want to know a secret?” he asked. I wasn’t sure I could handle any more big news but I decided to be brave.

After Jeffrey came Calendar, a small black-haired girl who was born in the country and had a unique relationship with electricity. Calendar was a personal favorite of mine; while I lacked her superpowers, never having redirected an electrical current with my mind, I wholeheartedly identified with her. I, too, was a small black-haired girl who had been born in the country. Imagine my surprise then when Calendar, who had grown up, had a daughter, and eventually grown old over the course of many bedtimes, decided it was time to die. Not wanting to waste away in bed, Calendar bid her daughter goodbye, smiled, and stuck her finger into an electrical socket. “A wonderful thing then happened,” my father said as I stared at him. “The electricity flowed through the socket and into Calendar; through her fingers, up her arm, danced around her heart. And Calendar’s energy, her life force, merged with the electrical current and left her body and she became one with the universe, part of all living things. She blended with the rain, the earth, the flowers, even her daughter. And she was happy. The end.”

Even as a four-year-old, I sensed that something was wrong with the moral of this tale. Was sticking one’s finger into an electrical socket supposed to sound so appealing? So full of adventure and teeming with possibility? Never before had an electrical socket tempted me; now, each time I passed one it called to me.

I eventually grew old enough that I no longer needed to be tucked in each night, but as my dad’s tales wound down, my own interest in storytelling began to grow. Once I started weaving my own yarns—usually modifying personal experiences—I noticed that by changing the details slightly my audience’s reaction changed. “No!” my parents would cry in disbelief when I assured them that yes, it was true: I had indeed been chased through the park by five salivating, rabid raccoons.

Looking back, I can see the hidden logic guiding my trajectory. I grew from a child who loved playing make-believe to a teenager who doused her cheeks with glitter and often wore a sparkly pair of fairy wings to school. Why wouldn’t I become a young adult with a tendency to tell slightly fantastical stories? Inhabiting the grown-up world seemed banal enough, but for someone whose greatest wish was to be a “felf” (half fairy, half elf) it was that much worse. For me, rebellion didn’t come in the form of smoking cigarettes or doing shots of cheap vodka, as it did for many of my peers. While they were struggling with an unfulfilled desire to be seen as adults in the real world, I was fighting another beast entirely: I wanted to be a felf in a fairy world. The only natural way for me to rebel against the encroaching mundanity was to bring the fantastical to my life—and I welcomed it, in the form of storytelling, with open arms. When I first brought my college boyfriend, Knox, home to meet my family, he had yet to catch on to my ways. “And then my professor threw a desk at the kid sitting next to me,” I said, finishing a story as we ate dinner the first evening. I speared a leaf of lettuce with my fork and sat back, enjoying the incredulity on Knox’s face. “That’s crazy!” he said, turning to my parents and sister. “Sure, crazy,” they replied, winking at him and cutting into their lasagna. “Wow, your family really didn’t seem to believe you at dinner,” Knox said as we lay in bed later that night. “Yes,” I said. “It’s sad.” I didn’t have the heart to tell him that my family already knew what he was sure to discover soon: crying wolf had become my method of operation.

Knox and I dated for nearly three years. By month eleven, he had witnessed enough of my life to recognize when one of my tales was taking a turn towards the fantastical and would often try to rectify the situation by interjecting little footnotes into my epics. “We were stuck in traffic and I couldn’t pee for twelve hours!” I would exclaim only to hear a quiet “five” murmured behind me. My parents would nod at him covertly and turn their attention back to me.

“You know the thing that surprises me most?” Knox asked as we sat side-by-side on the subway last summer. “You think you can exaggerate about these things even with Facebook and Instagram, when everyone has access to so much information about your daily life.” I had to concede that he had a point. In the age of social media, we expect to be served an alteration of the truth; we understand that everyone can make themselves look better by applying a flattering filter to a photograph, or improve a snapshot of their living room by cropping out the stack of dirty laundry in the corner. It’s easy to post a picture of one’s flashy new shoes but not mention the credit card debt that came with the purchase. These sorts of omissions may be misleading but they’re accepted—expected, even. Why show the mundanity of your life when you can make it glitter? Yet lying about something concrete in a world where facts can immediately be checked with the aid of a smartphone, where people publicly document their actions via the internet, is less acceptable than ever before. I often worry that I was not made for this era. In my darker moments, I wonder if there is something wrong with me.

The train stopped at Canal St. and two businessmen got on. “Do you think I have a problem?” I asked.

“No,” Knox laughed and squeezed my knee. “I think that you’re a storyteller and your memory is so good that you tell yourself these stories over and over again, remembering everything perfectly, and then you get bored. So you make things up.” I like his explanation; it paints me in a flattering light, makes me out to be a bit of a wild woman. Seen this way, I could be a distant cousin to Annie Oakley, while simultaneously possessing the precision and mental clarity of Hermione Granger. Yet, while flattering, this characterization is not true, and the irony would be too great were I to end on a false note.

The truth is that for the majority of my twenty-four years on this earth, I have been an imprecise, impatient person. My math skills have always been hampered by the fact that I view precise calculation as a waste of time and any natural talent I may have for board games is completely negated by my disinterest in actually learning  the rules. I know the structure of our society relies on facts—especially in today’s political climate, when the very idea of a fact can seem so slippery—yet when it comes to my own stories, I find I have no patience for such things. I justify my tales with a simple thought: why waste years of my life telling mediocre stories when I have the material to make them great? Why settle for a bemused smile when I can make my mother laugh so hard that she throws her head back, revealing her silver fillings? And if a couple fish turn to sharks along the way? That’s okay. When I’m old and ready to go, at least I know I’ll be leaving with one memory that remains untouched: the moment my whole family was cuddled around our fireplace, sipping oat straw tea and howling so loudly that my father could barely breathe, the three of them yelling at me through their giggles that they know I’m exaggerating, their faces filled with a mixture of outrage and mirth. This is a moment that I’ll remember, a story that, years from now, I won’t have to embellish. It will simply be there, ensconced in my memory, accompanying me as I sidle up to the electrical socket and stick my fingers into its depths… replaying as the electricity reaches my palms, moves up my arm, dances around my heart, and I merge with the universe. 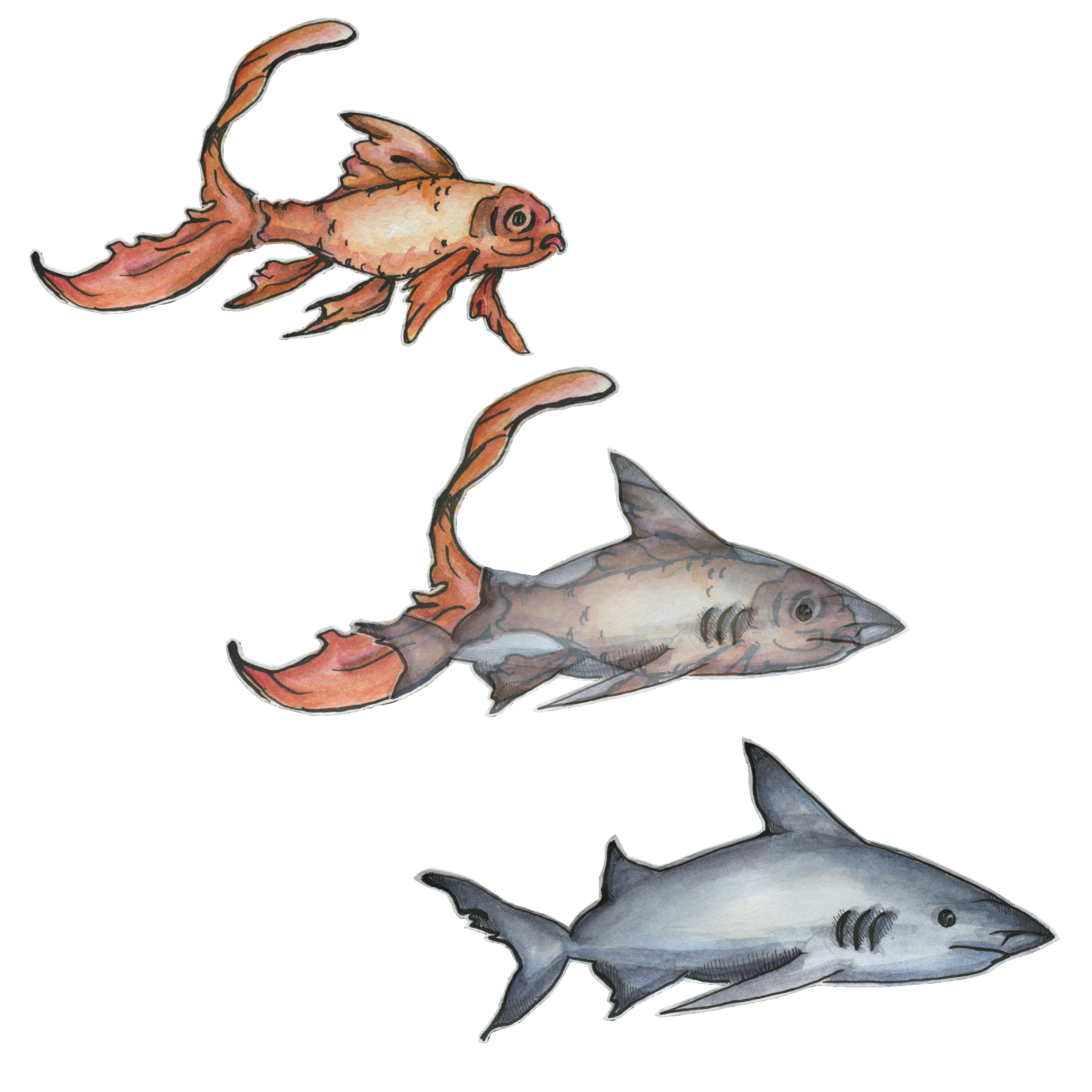 Luna Adler is a researcher for the television department of TED Talks. She lives in Brooklyn. For more, please visit lunaadler.com. More from this author →