Jimi Hendrix seems to be an obvious influence for many guitar players. He was the first player you ever heard about, whether you played or not. When I was first becoming curious about the guitar, people would always talk about him—I think my mom saw him perform at the LA Forum in the late sixties. I would hear “Purple Haze” every now and then on the radio, or “All Along the Watchtower.” I don’t really remember discovering Hendrix. It was more that he was always around.

Even so, hip-hop was the popular music in my high school. On my fifteenth birthday I went out to buy a pair of turntables with the idea of becoming a DJ, but when I got to the store the turntable setup was like a hundred dollars more than what I had to spend. So I went home with a cheap Squier Strat instead, and I taught myself to play.

At first it was very slow going. I was pretty much alone in a vacuum trying to get noises out of the instrument. I had to learn guitar from books, magazines, CDs, and vinyl records, which I found in thrift stores. This was before vinyl really came back into vogue, and I remember finding classics along with a lot of other records, often with amazing artwork, that brought me into the experience of discovering new music—stuff you could find for like $3, $5. Fast-forward to 2012…  I was playing guitar with Chicano Batman and our manager at the time was a friend of a fan who was pretty high up in the New Orleans promoter scene. He offered to put us on the bill at Voodoo Fest, you know, way down at the very bottom where you can’t even read the band’s name. But for us that was great because we wanted to get out of LA to take our music further.

Since this was our first big tour, we had no idea what we were doing, so we played anywhere we could, from town to town, until we got to New Orleans.  When we finally got there we ended up doing an in-store at Euclid Records the day before the festival. There were maybe three people in the audience, including the sound guy and our manager. But we didn’t care because we were just so excited to be playing. As payment the record store offered us a 25% purchase discount. 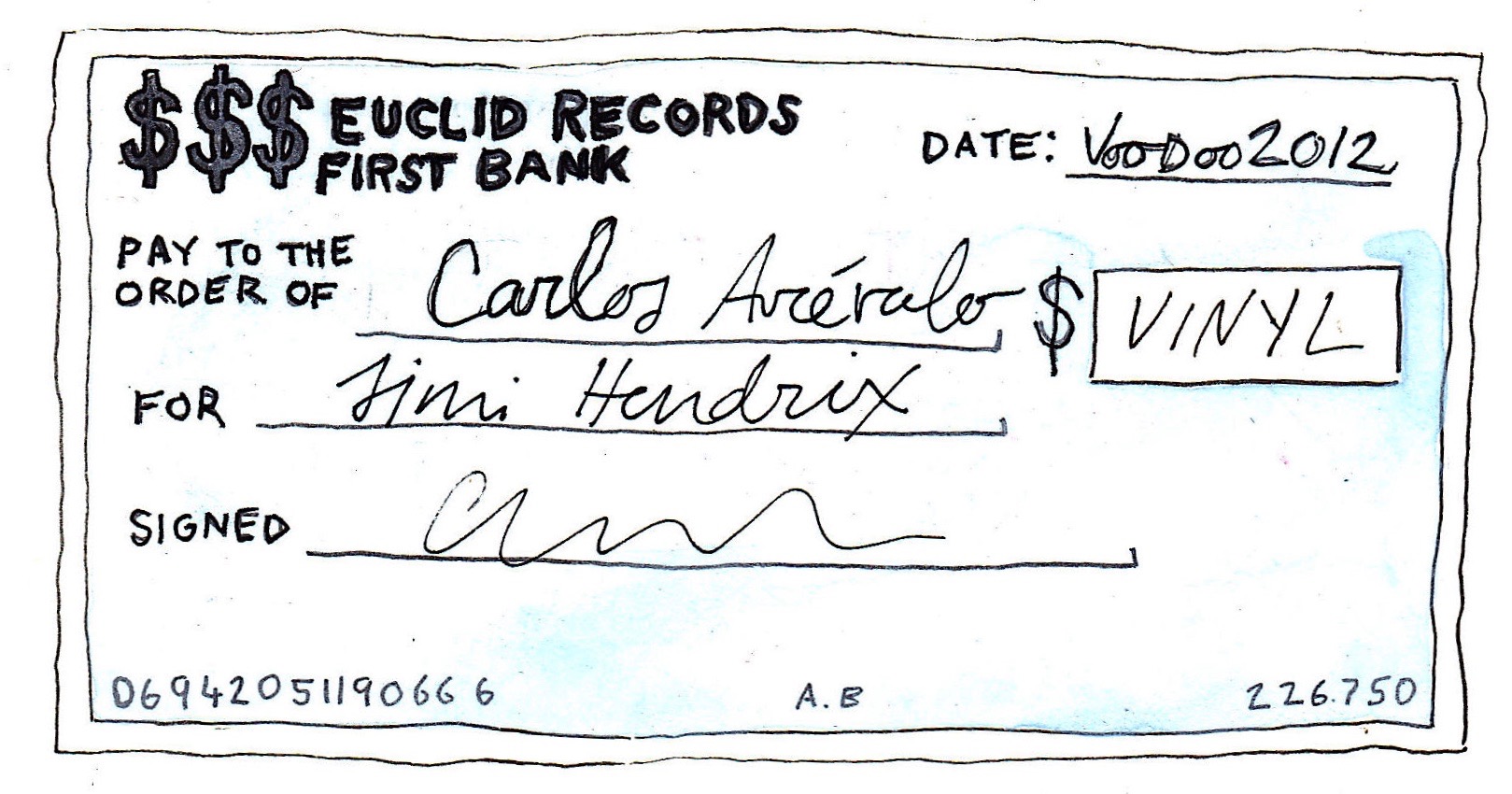 By then I had amassed a pretty good record collection, but I was always looking out for original pressings of Jimi Hendrix albums because he’s such a sonic genius and vinyl is the way his music is meant to be experienced.

One album that was missing from my collection was Electric Ladyland. I had the CD of the American version, which has a close-up of Hendrix’s face making an expression of “passion” while playing the guitar, but Euclid had a clean copy of the rare European vinyl release with the banned “naked lady” cover, which I’d only ever seen once before, ten years earlier, at a college friend’s father’s house.

People often point to Hendrix’s shred solos as the pinnacle of his mastery. But it’s his melodic sense and his R & B rhythm style that I love most. One of my favorite tracks is “Have You Ever Been (To Electric Ladyland).” It’s technically hard to play, but he’s not showing off. It’s the technique serving the beauty of the song.

His guitar solo tone on that song directly inspired my guitar solo in Chicano Batman’s song “Friendship (Is a Small Boat in a Storm)”:

For me, there’s always something new to learn from Hendrix—his songwriting, his guitar work, his outlook on art. I still play Strats for the most part—probably because of Hendrix—and even after all of these years, Electric Ladyland is still my prized album. But I once took it to an event in L.A. that I put together with our bass player, Eduardo Arenas, and I almost lost it there!

I opened the evening with a DJ set, which I started off, as I always do, with “Have You Ever Been (To Electric Ladyland).” It was a great show, but at the end of the night the bouncers were kicking everyone out and I still had to pay the musicians that followed me, so I asked my friends to take my records and meet me at the car.

I thought the records had been put away in the trunk, but the next day they weren’t there. Had I been jacked? It felt like someone had taken my memories from me. After looking everywhere it hit me to check The Last Bookstore, which is a few blocks away from the club. The vinyl buyer asked me a few questions and his eyes lit up. He said he just bought the records but couldn’t return them to me because the store wouldn’t pay him for the loss.

I had to buy them back from him, but it turns out the guy who sold them to the vinyl buyer wrote his real name on the receipt, and I was able to find him on Facebook. I told the guy if he didn’t pay me back I’d call the cops. But he explained that he was homeless, and found the records sitting out on the curb, and that he used the money to get a hotel room for a few nights so he’d have a place to shower and sleep. I felt terrible and embarrassed and told him of course he didn’t have to pay me when I heard this. I was just grateful to have my old rare Hendrix record back because it served as a reminder of how far Chicano Batman has come from humble beginnings to where we are now, where we play for big crowds and can make a living from our music. To me, vinyl records are like Polaroids. They come with memories, and they tell stories.

Carlos Arévalo is the guitarist for Los Angeles-based Chicano Batman, a four-piece band that NPR has described as having “a sound that perfectly captures dark lounges, quinceañera dances, car shows and backyard parties.” Following the release of its third album, Freedom Is Free, in 2017, Chicano Batman teamed up with the pop singer Miguel for a video series called TÚGETHER produced by the Latinx POV multi-channel network Mitú. The band will appear in New York City this month at Panorama Fest with additional U.S. tour dates coming this summer.