The obscenities and tragedies of American life pile up with speed, and in quantities, that are appalling. I thought we’d get real gun control after Gabrielle Giffords was shot. I thought we’d get real gun control after Sandy Hook. Needless to say, I wasn’t alone. Still, unless student activists and others prevail, the next news of avoidable carnage will arrive at any moment. The velocity and volume of response in the creative community is also huge, and at a time when it takes extra work to be grateful, I am grateful for two extraordinary new books of poetry.

The first, Bullets into Bells: Poets and Citizens Respond to Gun Violence (Beacon Press, December 2017), was in the works long before the recent carnage in Florida. Editors Brian Clements, Dean Rader, and Alexandra Teague structured the book so as to create a dialogue. The anthology is arranged in a mode of call and response: first a poem, then a response to the poem from a reader whose vocation is not connected to the literary life. Most of the poems are by marquee names in the poetry world, and they all deserve credit for exposing themselves to the pain this project inflicted. The relatively unknown responders exhibit the kind of generosity we should all aspire to in reading poetry. Meanwhile, Gabrielle Giffords and Mark Kelly wrote the foreword, which, because of their own experience of gun violence, adds another layer of urgent outrage to the volume.

Billy Collins’s poem, “Boy Shooting at a Statue,” is brilliant, and the reader’s response adds to the poem’s power. Nicole Hockley is the Managing Director of Sandy Hook Promise and the mother of a boy who was killed in the Sandy Hook shooting. In her response to Collins’s poem, she asks all the right questions about responsibility, and astutely calls Collins’s (and our) “noble statesmen” frozen. She addresses a general, beyond-awful state of affairs and notes the loss of her son.

Hockner’s response may not address what this longtime reader of poetry who has never been personally affected by gun violence might notice, such as elements of poetic craft and metaphor. Her unvarnished response to the poem, however, is especially welcome because poetry with political imperatives should always be as good as what Collins wrote, while being accessible to people who are not regular readers of poetry. Collins’s sound and shapely observations connect to a question we cannot answer, but which occurred to me on first reading as the heart of his intent in this poem: What kind of society teaches a child that this—shooting someone—is play? We must always ask this, because in trying to answer this question we might begin to act in ways to make American life less lethal.

It was late in the afternoon,
the beginning of winter, a light snow,
and I was the only one in the small park

to witness the boy running alone
in circles around the base of a bronze statue.
I could not read the carved name

of the noted statesmen
who loomed above, one hand on a cold hip,
the other thrust into his frozen waistcoat.

And the boy had only his hand for a gun,
but as he ran, head down,
he would lift a finger to the statue

pulling an imaginary trigger
as he imitated the sounds of rapid fire.
Evening thickened, the mercury sank,

but the boy kept running in the circle
of his own footprints in the snow
as he shot blindly in the air.

History will never find a way to end,
I thought, as I left the park by the North gate
and returned to the station of my desk

where the sheets of paper I wrote on
served as pieces of glass, through which I could see
swarms of dark birds circling the sky below. Juan Felipe Herrera is a Stanford-educated son of migrant farm workers and, like Collins, is a former United States Poet Laureate. In “Poem by Poem” he offers a scenario less bleak than Collins’s circling dark birds. The poem is dedicated to the June 18, 2015 victims of the Charleston shooting, and honors religious people who welcomed a murderer into their place of worship: “poem by poem / we can end / the violence / every day / after every other day,” Herrera begins, and by the poem’s end, one can almost imagine the possibility of an end to mass killings if we “honor them / wash them stop them / from falling.” Saying their names—which Herrera lists in italics before the poem begins—is a helpful exercise, and so is learning the most mundane but no less treasured shards of their stories.

One of the Charleston victims, Ethel Lance, who went by “Momma,” “loved fine perfume,” and took pride in her home and in her work. We learn this from Reverend Sharon Risher, who survived that shooting and lost a childhood friend in Myra Singleton, who, Risher also tells us, was born to teach. The line between the living and the dead is very permeable, said my own pastor, quoting his mother. I have never asked how she comforted him after he buried two teenage victims of inner city violence, but as a Catholic I share their conviction. Everything Herrera and Reverend Risher say, with unembellished eloquence, brings us closer to those who died, closer to the possibility that words will unfreeze hearts.

In another poem, “The Leash,” Ada Limón wonders if:

Perhaps we are always hurtling our body towards
the thing that will obliterate us, begging for love
from the speeding passage of time, and so maybe
like the dog obedient at my heels, we can walk together
peacefully, at least until the next truck comes.

Limón doesn’t offer anything easy, and like so much in this stunning call and response of a book, it has a “terrible beauty,” acknowledged by reader Caren Teves. Teves lost her son Alex in Aurora, Colorado, when he shielded his girlfriend from gunfire. His murderer was his age and legally obtained three guns and six thousand rounds of ammunition “despite his current and past mental health history.” Caren Teves and her husband, Tom, after learning that fame was a motivating factor in the bloodshed, founded No Notoriety, an organization that is doing what it can to make fame less appealing to the emotionally unstable. Like so many in this devastating, rewarding book, the Teves are doing their part and are helping us do ours.

Inquisition by Kazim Ali (Wesleyan Poetry Series, March 2018) is a passionate companion to Bullets into Bells. It’s no surprise that in “Phenomenal Survivals of Death in the Mountains” Ali notes that the poem is after Louise Glück, she of sometimes excruciating, and always impeccable, scrutiny.

Jacketed by mountains does the self of sulphur
Send itself to rock or vapor
Cleft do You breathe my surface
When in the valley I trafficked in sound
I dreamt if a man his hands bound
By shafts of sun and cloud
Saying, “I am Saint Everyone.
In my pocket a spool of piano wire.”
Awake in the predawn
I will fill this coffin of stone.

This is the first section of four, and the poem’s last lines are a metaphor for the whole composition and the collection itself:

From this shore I windward grow
And thorny border cross
My first body built sturdy from loss
My second from spans of cloud and snow.

It’s impossible to read this poem, no matter when it was written, without recognizing that piano wire is often an instrument of death, and that the borders in any American moment are like bodies “built sturdy from loss“—a phrase alive with wisdom, and gracefully said.

Ali is queer and Muslim and was born in the United Kingdom. He now lives in Ohio and his admiration for American poets with humane politics is on especially fine display in “Amerika the Beautiful,” which, Ali notes, is indebted to “Bush’s War” by Robert Hass. Allen Ginsberg, speaking at the Folger Shakespeare Library in the early 80s, declared that if you’re going to write political poetry, it had better be beautiful. Hass, a contributor to Bullets into Bells, has been meticulous in this regard, never letting fury lead him artistically astray. Ali is just as successful in “Amerika the Beautiful,” a multi-page prose poem:

It’s a trick that history outside has nothing to do with history inside. A trick that God’s words as believed by heathen others aren’t also graven in fire in my own body. As though I turn in, tune out, the stiletto of the world spikes through: a young gay man in California has a bottle broken over his head .#MuslimBitch… . In Hyderabad in the night I reached out across the wires to my friend while outside loomed the dark rocks which broke apart millions of years ago. 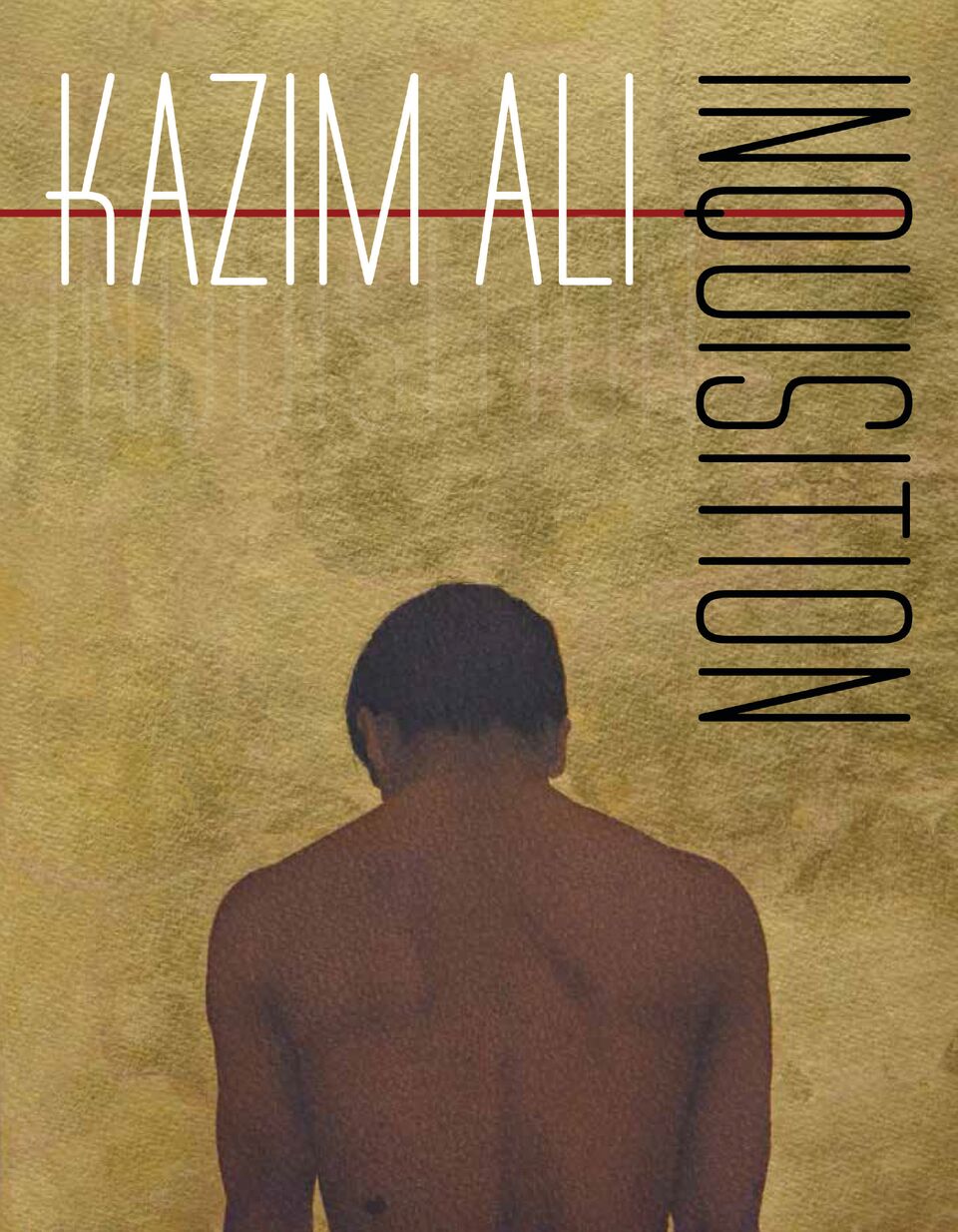 Reading Ali is an act of redemption even when the worst is spiked and wired with hatred and danger. His perspective on time is both a challenge and a balm, so that, for example, in “The Dress-Maker of Galilee,” he gives a portrait of someone who won’t get the kind of attention world “leaders” receive, in a part of the world that has been ravaged by men in power:

He wears himself down wild and uncertain,
laps the frayed thread-end
with his clumsy tongue.

He wants to know as well what the body
and it’s coverings could teach him about
genders of flesh.

The Druze have a secret book.
Some know what’s in it,
some don’t. No one minds.

His voice falls to pieces when he claims
for himself the spaces
of flowers or silk.

At the worried seam of border between
what is taught and what is felt, some Druze know
we are all about to switch genders.

With eyes the same silver as his tailor’s needle,
in the globe of barbarous heat
he stakes his claim stitch by stitch.

He never learned how to behave.
He knows only he must sew one piece to another
and spike heaven sense.

What do you do if you have never learned how to behave? If you are this man, and so many others, your fate is sealed and some of your story brings us closer to you. “This deep life—sex God death—it wants us,“ Ali writes in “Apasmara Climbs to the Mountain Lake.” It is, like all the poems in Inquisition, the best kind of authority. It speaks to universal need in the face of want, and in the face of the most abundant desire.