Brian S: I want to ask first about the poem “Ode to Cheese Fries,” especially the way it sort of pushes back against the idea that for something to be good, it has to be real, or unprocessed maybe. That there’s value in the manufactured thing even if, or perhaps because, it’s manufactured.

Brian S: Like, I work in a store (though that’s about to change) that sells organic, free-trade, quinoa-fed beef. Okay, I don’t know about the quinoa-fed, tho I know we sell about ten different kinds of quinoa itself. But I grew up on cheese dip made from Velveeta and Ro-Tel chilies. [It was flax-fed beef, not quinoa. – Ed.]

Brian S: I’m a bit older than you, I believe, but man, when gas stations put in hot dogs with the optional chili and nacho cheese, that was a game changer for me. Two for a dollar chili dogs in the afternoon, with a thirty-two ounce cup of Coke? I was eating like a king.

And if I want to get more academic about it, I think the poem does a great job of digging into what it is to be a kid to working-class parents. The Wolverine without the retractable claws or the right uniform.

José Olivarez: With that poem, writing towards that nacho cheese helped me articulate something that I really love about the corners of Chicago and Calumet City where I grew up. We loved to eat. And there wasn’t a ton of luxury we could afford, but we celebrated every bit of luxury we could get.

Brian S: Right. And even when you knew it wasn’t luxury to other people, it was luxury to you, and there’s a joy you derive from that experience.

José Olivarez: Absolutely. I hear you on the chili dogs, by the way. That sounds outstanding. I love a good hot dog. 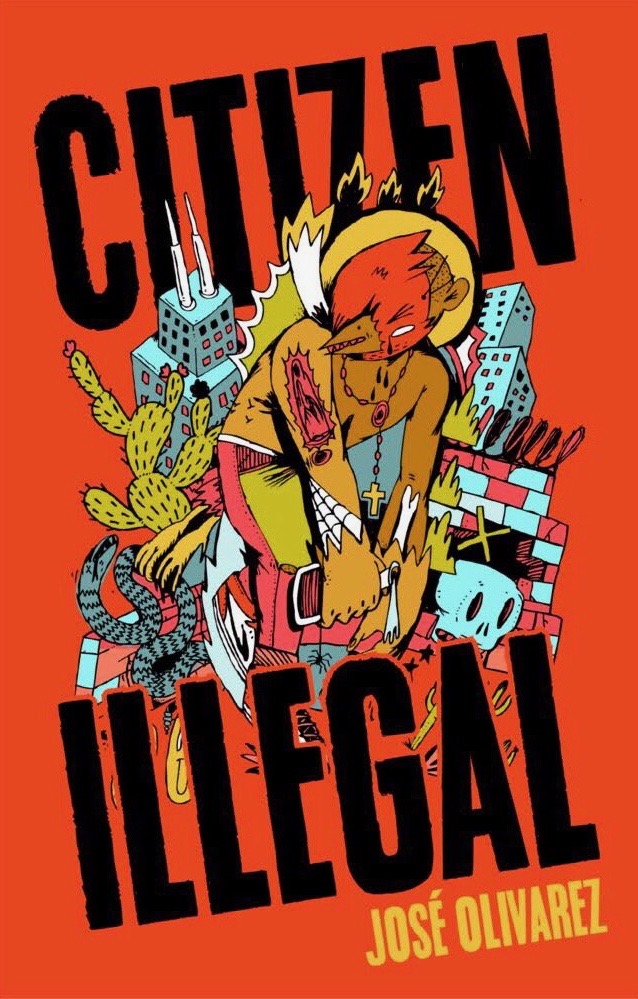 Brian S: In that store I mentioned earlier, we sell nacho cheese made by Rick Bayless’s Frontera, in packets. Incredibly overpriced, of course. It makes me sad when I see it on the shelf, because it misses the whole point.

Brian S: I’m sure someone has written something on food gentrification, and I want to read it, because it is a real, fucked up thing.

About your formal choices in the book, I’m curious as to how you decided to place the “Mexican Heaven” poems. They seem to act as a moment of pause in the book.

José Olivarez: “Mexican Heaven” was a single poem that I broke up for the purposes of the book. It was my favorite poem in the book, and it felt like an important poem to keep coming back to and changing each time. I think they provide a pause or a moment of respite depending on which one you’re reading.

Brian S: And then there’s the one on page thirty-five, which is sandwiched between the poems “White Folks Is Crazy” and “I Ask Jesus How I Got so White,” which serves more as a bridge, or even a pivot point for that arc of the book. It’s the one which ends “there are no white people in heaven.” And that feels like a setup/punchline from a stand-up act (which I mean as a compliment) which really asks white readers to look at ourselves in relation to the world.

José Olivarez: Let me tell you about that “Mexican Heaven” poem. I wrote the setup of that poem first. I thought that by writing in white people and making them the gentrifier who asks the Mexicans to speak English, I was was exposing how clueless white people can be about the way they inflict themselves on others.

And after looking at it longer, I realized that the joke was on me because I was writing a poem about “Mexican Heaven,” and I couldn’t imagine that space outside of the white supremacist structure, so that even in my imagination there were white gentrifiers.

Brian S: It’s generous to call us clueless about that, I think.

José Olivarez: It exposed how much I had internalized that way of looking at the world. So I added the punch line to that poem as a way of undoing that act of imagination. As a way to challenge myself to think of a space that doesn’t rely on the hierarchical tropes I’ve learned growing up in the United States.

Brian S: I have to admit, I didn’t consider that part of it until you said it. It’s so ingrained in me being white that there’s no place I’m not allowed to go that I have to be reminded that there are places I don’t belong, at least not without an express invitation.

Like, when I was in grad school, a visiting writer asked us in workshop if we would ever write in the voice of a black person. And I thought no, but then he said “of course you should. You should be willing to write about anything in any voice.” To a room full of nothing but white people. That was horrible advice.

So I tried it. Not only did I try it, I wrote poems in the voice of the legendary bluesman Robert Johnson. Thank god no one ever published those poems, because they were fucking ridiculous. And I think about how arrogant I was to even imagine I had the right to do that.

José Olivarez: Yeah man. Honestly, as often as I am upset about a poem being rejected, I find myself just as often grateful. Some rejections are blessings.

Brian S: I want to change course a little bit. There are some amazing love poems in this book. I think my favorite is “You Get Fat When You’re in Love,” mostly because it embraces the body. I’m a hefty guy myself, so when I read “Your buttons can’t hold all the love / rippling up the middle of your ribcage,” I know that from experience, having been in an amazing relationship for eighteen years now. And what I like most about that poem is that while it ends on a broken heart, the speaker isn’t trying to get into shape to attract someone else. They’re just sad.

José Olivarez: Hahahaha. That poem came to me because my friend Britteney had a joke about one of our friends. She said that you could always tell if so and so was in a relationship by his weight. He always got skinny when he was single. And that moment made me reflect on my own experiences and it was true for me, too. When I was in a relationship, I got a little fatter, and it was a happy fat! Maybe the most happy fat. And I wanted to think about how flat the conversation about weight is, and so often losing weight is treated as a joyful fact.

Brian S: What are your favorite poems to read aloud?

Brian S: That’s such a good poem. That’s a poem I read and thought “I can never do anything like that, and that’s fine, because this poem exists in the world.”

Who are you reading right now? What books should we be on the lookout for?

José Olivarez: I’m so excited to get back into a deeper reading practice. I loved Cruel Futures by Carmen Giménez Smith. I’m about to dive into Jessica Hopper’s book Night Moves. I’m reading Fatimah Asghar’s If They Come for Us, and when I ride the bus to work, I read Studs Terkel’s Working, which I love love love.

Brian S: Are you working on anything new right now?

José Olivarez: Yeah! I wrote five new poems in collaboration with Victoria Martinez. She is a visual artist from Chicago and produced this set of twenty-five beautiful collages. I wanted to engage with her work, but not by giving story to the visual content she made. Instead, I wanted to imitate the way her collages worked, so I tried writing these collage-like poems. They’re weird in a good way.

Brian S: Yeah, you mentioned that on Twitter. That’ll be interesting!

José Olivarez: It might be interesting, but it might not. Honestly, the more I read Studs Terkel, the more I just kinda want to amplify his interviews. Working is an incredible book.

Brian S: Are you going to be touring with the book at all? Coming to Iowa, since we’re right next door?

José Olivarez: Yeah. I have a bunch of events scheduled and I’m working on planning even more events. I have no plans to go to Iowa yet, but hopefully that will change. I think in the spring, I’ll be going to the Quad Cities out in Western Illinois, so hopefully I can find a way to extend that trip into Iowa.

Brian S: Oh yeah, you’re on the border there. Might as well come in. 🙂

Thanks for joining us tonight, and for writing such an amazing book. Best of luck with it.

José Olivarez: Thank you for having me!