In 1999 I was five. I was really just discovering comics for the first time—mostly by reading Spiderman.

At that time, I remember thinking Spiderman was comics, more or less. A whole industry entirely comprised of a single character. Unfortunately, pretty much everyone else thought that way, too. If it wasn’t one costumed crusader, it was another.

Luckily, for both me and the medium as a whole, there was a whole slew of brilliant artists and writers who were then turning the art form on its head, and redefining what comics could be.

Art Spiegelman had recently collected the Pulitzer Prize for Maus, Love and Rockets, the expansive opus by the Hernandez brothers was bona fide bestseller, and, of course, there was Canada’s own Dirty Plotte, which author Julie Doucet was just then wrapping up.

Dirty Plotte didn’t last long, but its impact was enormous. It created a new avenue for women in comics, stretched the boundaries of sequential storytelling, and helped build one of the most resilient comics publishers in the world. “Plotte,” for the uninitiated, is Québécois slang for “cunt,” as the first issue gleefully informs the reader. Doucet has attempted to explain the title in the past, but not in a way that would satisfy those who are predisposed to disliking it.

“It was rather in the spirit of men’s hardcore comics, with naked women all over the place. Dirty Plotte could have been one of those. It’s ambiguous, in that respect,” she told an interviewer in 1991.

Quickly perfecting the hand-made, DIY style of the ‘zine with the first iteration of Dirty Plotte, which ran for twelve issues between 1988 and 1989, Doucet was ready to move on from the self-published mini collections into the world of “legitimate comics.”

Dirty Plotte, far from a safe bet, was nevertheless the title that Drawn & Quarterly’s Chris Oliveros chose to kick off the company’s move from an anthology magazine to a comics publishing house in 1990, setting the stage for one of the best and most consistent publishers in the world. It ultimately proved to be the right choice, and the comic’s popularity helped draw other formative artists to the brand like Chester Brown, Seth, and Joe Matt. The most constant feature throughout Doucet’s work is her illustrated dream sequences. Instead of what could have been a hokey recurring theme, Doucet fills the panels of these sequences with some of her most imaginative and disturbing flights of fancy, conjuring up fantasies full of sex, drugs, and violence the likes of which I’ve rarely seen. But, like Little Nemo before her, Julie will typically awaken from Slumberland in the final panel for a clever exit line or a dismissive shrug.

Her propensity for sexually explicit, violent, stream-of-consciousness stories has sometimes led comic scholars to label her as “the female Robert Crumb,” a title which, especially when considered in 2018, is pretty regressive and arguably dismissive of what Doucet is bringing to the table—an imagination that is wholly her own.

We are able to get a glimpse into what a female version of the toxic male id found in comics might look like in one of my personal favorites, “If I Was A Man,” which features a gender-swapped version of Doucet, acting like chauvinist dickhead in a clear subversion of hyper-masculine tropes spurred on by the underground comix movement.

Otherwise, much of her subject matter is distinctly feminine, writing honestly about bad boyfriends, losing her virginity at seventeen to a much older man, and even a miscarriage. When asked why she was so revealing in her work [in a 1991 interview with The Comics Journal reprinted in the new collection], Doucet told interviewer Andrew Dagilis, “I didn’t think people would be reading them. And once people started reading my comics, I realized that they really liked them, and continued on that path, for better or for worse.” 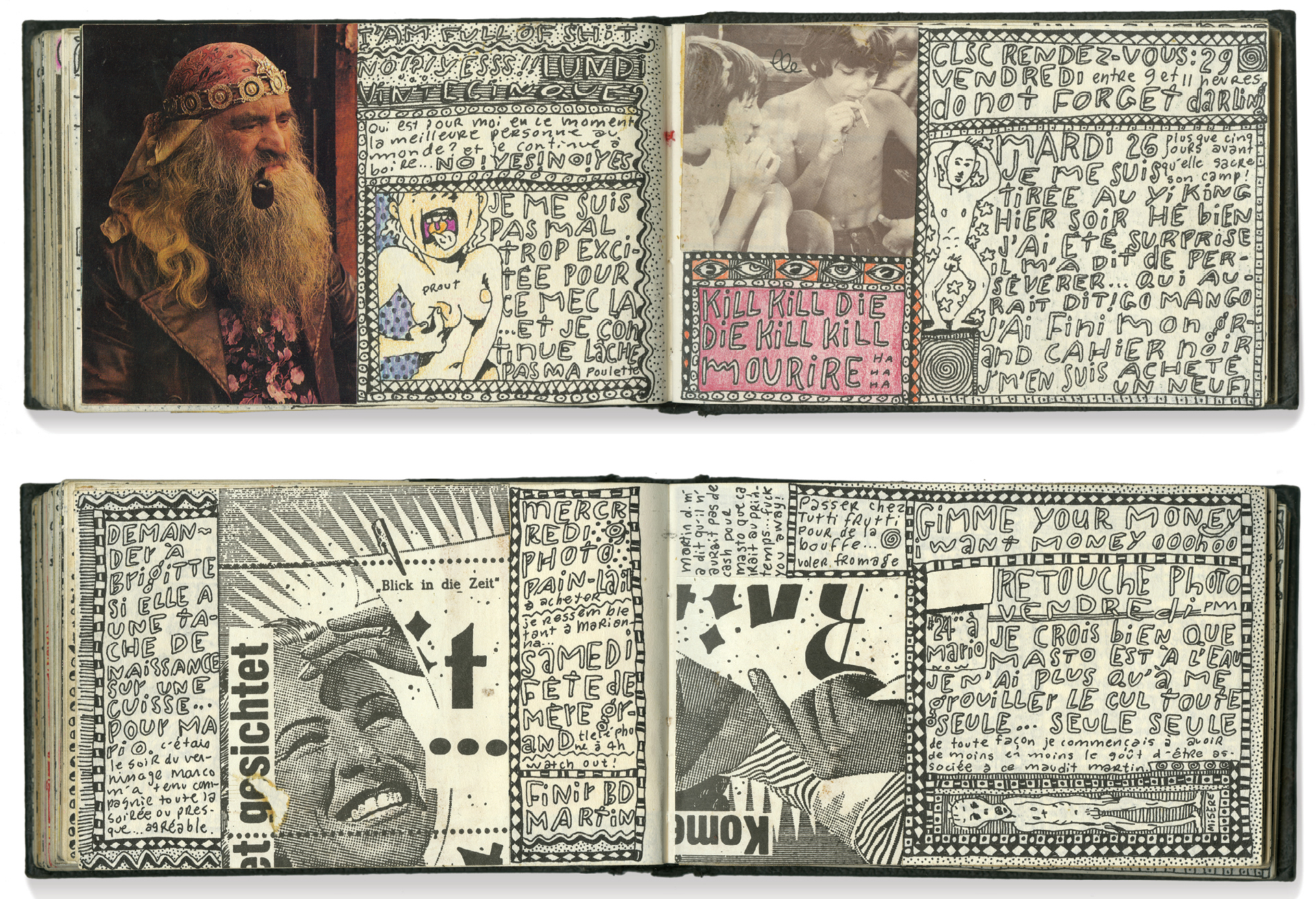 Dirty Plotte ended its run in 1998, with Doucet quitting comics altogether shortly thereafter, giving her just ten years to create her legacy as a professional cartoonist—a moniker she now rejects in favor of the more general term of “artist.”

This is somewhat understandable, considering how often her work pushes the definitions of what a comic is thought to be.   Looking at the body of work she produced in such a short time period, its no wonder how she developed her skills so quickly. Especially between the years 1988-91, the pace in which she was working is stunning, developing all of the skills that would eventually make her one of the best artists of the era.

If I may speak as a cartoonist for a moment… Man, those backgrounds. There is a lot to envy about Doucet’s talent, but this is one thing that she does exceedingly well. Her big-headed, simple character designs allow for enough contrast that Doucet can fill in the detailed, lively backgrounds without distracting from the momentum and clarity—no small achievement, especially for a book rendered entirely in black and white.

Even her earliest work has an incredible sense of place, each panel drawn with considerable depth and attention to detail. Although her human (or feline) characters are always front and center, Doucet has an incredible flair for the inanimate. Her rooms, streets, and objects have more personality in and of themselves than you’ll find in most mainstream comic characters (especially in an early favorite of mine, “Dreamt: February 17,” in which a household appliances become inexplicably sentient after Doucet wakes from a dream).

Doucet’s early ‘zine work, which is peppered throughout the series, is considerably less polished than what was to come (though still immensely enjoyable). By 1990, however, she seems to have had some sort of creative epiphany, as every strip from this point on displays her as an artist fully formed. Although she continued to develop her style throughout the rest of the decade, this is when her style became recognizably hers at just a glance.

By the end of the series, and especially throughout the “New York Diary” stories, her drawing had become so technically proficient that it was almost completely at odds with her frenetic, punk-rock ‘zine aesthetic, lending some credence to her claim that she had “no where else to go” in the medium. And so, jumping ahead seventeen years, we have Drawn & Quarterly’s Dirty Plotte: The Complete Julie Doucet, a near-complete collection of everything she’s done (and, as it currently stands, will do) in the medium.

The cereal-box-shaped set itself isn’t all that dissimilar to other “compete collections,” like the ones produced by Fantgraphics for Daniel Clowes’s Eightball and Peter Bagge’s Neat Stuff, separating the work into two volumes housed in a cardboard slipcase. While both of those sets are great, Drawn & Quarterly’s treatment of Doucet’s work is far better than either.

Doucet has long been a flagship artist for the publisher and clearly, they know it, and they give the series the reverential treatment it deserves. One imagines that it was pretty jarring to see the scrappy, ‘zine aesthetic of her early work published so professionally in the original Drawn & Quarterly floppies, and this feeling is only amplified when printed and bound in such a lavish and well-produced collection.

Still, not wanting to deprive the readers the joys of the cheaply printed ‘zine, the collection includes a facsimile copy of Doucet’s first mini-comic, which is stuck in between the books.

The first book in the set collects all of the Plotte comics in published order, including front and back covers on the appropriate paper stock. The second book bears the subhead “Everything Else,” and includes several interviews (both new and old), sketchbook art, and all the work created outside of the Dirty Plotte title. Both volumes are beautifully decorated with rare, new drawings from Doucet, and the slipcase, covered in older material, is equally gorgeous.

One of the most striking inclusions in the set can be found on a single page towards the end of the second collection. It’s a five-panel work entitled “The Year 2050”—her first published comic in years. The comic, while brief, is as funny, personal, and jam-packed with detail as any of the work found in Plotte, suggesting that when and if Doucet finally chooses to make a return to comics, it will be a triumphant one.