I was seven the first time I fired a gun. I held the glossy black weight in my palm, still too small for the handle’s bulk. In the back of my head, there is still a hazy list of details which reads itself off in my father’s slow, baritone, Ohioan lilt. A Glock 19 weighs just over one-and-one-quarter pounds, has a trigger tension of 5.5 pounds, has a 9.8-inch right-hand hexagonal barrel twist, carries 15 9mm Parabellum cartridges. Introduced in 1988, it was the weapon of choice for US Law Enforcement, but also gained widespread popularity with civilians, eventually becoming known as America’s favorite handgun.

Last week I read a statistical analysis of every mass shooting in the United States since August 1, 1966. The numbers are staggering, but one detail stands out. Among the two hundred and ninety-eight guns used, 9mm semiautomatic handguns like the Glock 19 were the most commonly used weapon. In my head, I redefine the word “favorite.”

After sitting me and my brother—eleven months older, my Irish twin—on a pile of logs beside the barn, our father paced, the Glock, his service weapon, cradled in his hand. Our father was, despite claiming there is no such thing, an ex-Marine, who’d found his way into the corrections industry. Throughout my childhood, he served as a member of CERT, the Correctional Emergency Response Team, Multnomah County Jail’s SWAT program. Between sips of a beer stuffed into his back pocket, he showed us where to find the safety on the Glock, how to discharge the magazine, the proper way to hold it when you were and weren’t prepared to fire, how to line up the two iron sights for a clear shot. He told us a story about two brothers who found their father’s service pistol while playing and decided to make it part of their game. The younger boy accidentally shot his older brother right between the eyes.

“This,” he said “would have never happened if their father had taught his sons to use and respect guns.”

That was why he was teaching us. He flicked the safety on and off, on and off, handling the pistol more gently than I had seen him touch anything in my life.

After an hour of explanations, he pressed the Glock into my palm. It was heavier than I expected. I took aim, squeezed the trigger, exhaled, and—it was louder than everything, my brain, my heart, louder than anything has the right to be. My eyes stung from the effort of not crying. I’ve never fired a gun since unless my father made me. When my brother shot, he fired once, three more times, then emptied the clip. Fourteen years later, he called my mother from boot camp to tell her that he’d earned his rifle certification.

I was only five years old when I had a pistol pointed at my face for the first time. It was Christmas morning, and we were staying with my mother’s parents. On Christmas Eve, my grandfather, Papa—another ex-soldier and cop—said, “Don’t you dare wake me up before eight o’clock. I sleep with a gun under my pillow and I will shoot you.” Thinking he was joking, I crept up to his bedroom before sunrise, my father’s bulletproof vest with its stamped white CERT logo strapped around my scrawny frame. I sometimes dream of the Luger’s barrel. How it stretched like an endless tunnel off into the dark. How the snap of him pulling the hammer back sounded as if it were miles away. This story became a family favorite, told every Christmas for years.

When I was twelve, the same grandfather fired a twelve-gauge shotgun over my left shoulder. We were out hunting wild quail and a bird he had downed sprang back up behind me before his bird dog could retrieve it. This is another of my mother’s favorite stories. She calls the quail Two-Shot Ted. That year she bought him a Christmas tree ornament of a duck with a hunting rifle, snapped off its left leg and scrawled Ted across its stomach. She always leaves out the fact that I couldn’t hear right for days, that now I listen to music in my headphones so loud that people walking past me in the street can hear. We ate Ted that night, picking tiny beads of bird shot from our teeth.

The first boy I ever kissed was shot in a drive-by when I was sixteen years old. He was walking in the wrong part of town with his cousin, too late at night. He survived. Later, he showed me the scar on his stomach, the crumpled slug of copper and lead that the ER doctor had let him keep. For weeks afterward, I woke—heart pounding—from dreams of his oversized white t-shirt, the sudden red of a pomegranate pulped in the fist, his damp hair slicked to his zit-studded brow. I never told him about these dreams.

A cop pointed a gun at my chest when I was twenty-one, fifteen, nineteen, seventeen, fourteen. Each time I was sure they would pull the trigger, make me a headline, the latest gossip: Dead Faggot in a Dress. They never did. How many times did I survive solely through the whiteness of my skin? I know that the answer is “all of them.” 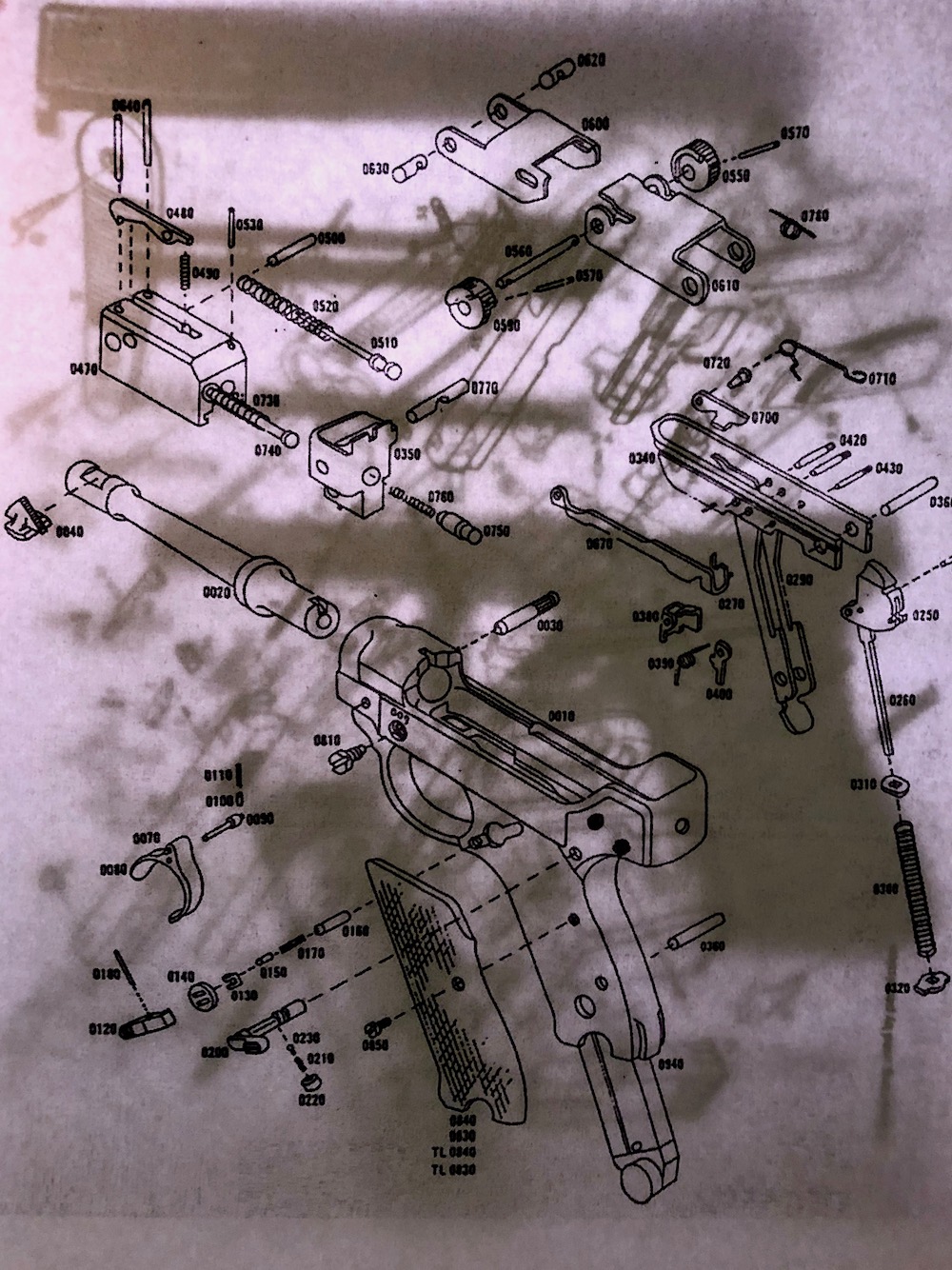 When I was four years old, my father nearly shot me in the head. He was cleaning a pistol drunk in his bedroom. Again. He forgot to clear the chamber and when he tested the trigger, a 9mm slug lodged itself in the oak cabinet six inches above me while I played with my aunt’s Barbie dolls.

A month after my twenty-third birthday a man stalked me through the streets of Santa Ana. He stayed, always a block behind, waiting for me to take a wrong turn, to find us both on an empty street. I kept thinking how even in the dim light my lipstick must make my mouth glint the color of fresh blood. How, for a brief moment, as I passed each street light, the beams must have fallen around my black dress into something like a halo or a chalk-line. I ducked into a restaurant and watched him stalk past, waiting for a moment at the corner of the block, then moving on. Tucked into the waistband of his boxers, the dull gleam of a revolver.

Only a year before, I woke to the news of the deadliest mass shooting in US history. I watched the body count rise as first responders pulled the dead and injured from the dance floor, and listened to the victims’ voicemail messages to their families. The sense of safety I had built up for myself buckled and collapsed.

I later learned which gun Omar Mateen used in the Pulse shooting and, of course, it was that old familiar weapon—a Glock. After I explained to a straight friend the potential danger I face every time I leave the house, he asked why I don’t buy a gun. He told me how easy it would be to apply for a concealed carry permit. I said nothing. I wish that I had told him this instead:

When I was fifteen, my brother and I came home to find my father’s rental car—driving hammered, he’d totaled his secondhand VW Rabbit into a telephone pole—slanting off the driveway, wheels dug into our front yard’s sparse grass, and my mother’s Jeep pulled hastily against the curb. The front door was wide open, our dogs nowhere to be seen.

Inside, everything was where it belonged. I checked robbery off my mental list of disasters, hurrying toward the sound of my mother’s voice behind the house. What I saw on the back porch is always Polaroid clear in my head. My mother hunched over the glass table, the contents of her purse strewn across its dust-caked surface. The cigarette in her shaking hand, its ash an impossible bridge stretching into thin air uncollapsed. Her cheeks lined with tears and flecks of cheap blue eyeliner. The empty fifth of vodka on the table. My father’s hard gray eyes. The service pistol locked between his teeth.

It’s hard to put back together any of the words my mother said to him. Like piecing back together a small machine from its constituent parts. There is always something left out or missing. What is reconstructed might resemble the whole, might even function, but fails in some small, vital way to be what is intended. What I do know is this: a Glock 19 has a trigger tension of five and a half pounds; my father’s finger had produced this weight hundreds, maybe thousands of times; memory has a way of remixing the senses—the way I remember it, a gunshot was the loudest noise I had ever heard, until I heard my father’s steady breath, in and out through the nose, his lips tight around the gun barrel. But this time, he didn’t pull the trigger.

When he took the gun out of his mouth, it uncorked a stream of apology as my mother gently pried the Glock from his stiff hand, slid it into mine, and told me “Hide it.” I stumbled into the house, stunned by the cold contrast from out in the mid-afternoon heat, only then noticing the sweat that had crept into my clothes. His voice followed me, “I’m sorry, I’m sorry. Fuck. I’m so sorry,” like a stone skipped across a pond. The sound steady, again and again, then suddenly, sunk and gone. I shifted from room to room, taking the gun apart, just like my father had taught me, tucking pieces between books and into drawers. A second father, over his fading, sobbed apologies, instructed me: Slide lock, trigger spring, mag catch, extractor, spring cup, follower, spacer, firing pin. Until nothing resembled a part of the whole. We were still finding pieces, years later, and wondering where they came from.