As a kid I had this Winnie the Pooh dress—my grandma worked at Sears for like forty years so we got a discount, and everything came from there. I used to put pieces of fabric on it with safety pins and stuff and walk around the house. When I got out of the bathtub I would also go into my bedroom and drape the towel around me into different shapes. In fact, sometimes I would only pretend to take a bath as an excuse to drape. Most of the kids I knew didn’t do this. They were more into dress-up dolls like Angel Baby.

I had a single mom and we didn’t have a big budget for back-to-school clothes. In high school I started shopping at thrift stores, which are called “The Bins” in Portland. There were mountains to go through and I loved finding great stuff, like a pair of Tony Lama red and white checkered cowboy boots for $12. They were size seven or seven and a half, and they fit me perfectly. I also rented them out to other girls in my school for three dollars a day, and quickly made back my twelve dollars as a fashion entrepreneur.

In Bikini Kill I picked up a great nightshirt; maybe somewhere in Australia? On the front it had a photo of a “hot guy” in a bathing suit, and the back was the view from behind. I also found a T-shirt that someone had clearly made themselves, with iron-on letters that were peeling away. I was entranced, wondering who made it and why. At the time, and even today, there’s a huge backlash against feminism. My take was that a woman was planning on making a shirt that said something like, “Happy Birthday, Susan,” but said to herself, “Fuck it, I’m going to make this shirt instead.” I appreciate that the message is complicated. Is it that touching will cost you because you’re going to get a punch in the nose? Or is it like, “Look, if you’re going to touch me, you’re going to pay me. I’m not giving it away for free”? Either way, the T-shirt was an affirmation that I wasn’t crazy.

Here’s the T-shirt in our very first band photo, shot by Erin Smith of Bratmobile at a 4th of July party she threw in ’89 or ’90. Tobi [Vail] is wearing it, and I’m wearing Tobi’s Clash shirt— 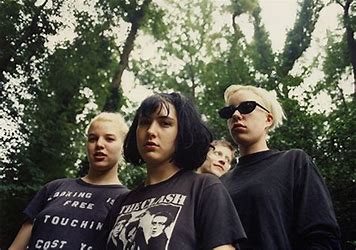 At one point or another every member of Bikini Kill wore the T-shirt. I also remember Ian Svenonius wearing it, and then it may have made its way through the other members of Nation of Ulysses. I can’t remember exactly when I lost track of its whereabouts, and after a while I’d forgotten about it completely.

Fourteen years later Andy Coronado—who I don’t know very well—came up to me after a Le Tigre show and handed the T-shirt to me. It smelled so bad, was so threadbare, and had so many holes in it. He was just like, “Hey, I thought you might want this.” And I was like, “What the fuck?”

Bikini Kill toured a lot. There weren’t that many other bands who were informed by feminist activism to hang out with, so the scene included a lot of other people with different ideas and beliefs. Maybe some of the people who wore the shirt interpreted the message differently than me. Maybe they only had a relationship to the person who wore the shirt immediately before them.

In any case, I love thinking about how over all these years none of them threw it away, and how they kept it going. At some point, I’d love to gather pictures of everyone who wore it! It’s become almost like an historical object to me, reminding me of the relationships we had with other bands, and the many musicians who have shared the T-shirt and made it their own.

Over the years, I’ve made many T-shirts for myself, and a “Kill Me” T-shirt dress that I wore at the 1993 abortion rights benefit concert Rock for Choice, and later re-made to celebrate the release of The Riot Grrrl Collection in 2013. I also made a series of Yoko Ono T-shirts reflecting different phases of her style, like a “Yoko for all seasons.” Recently, I learned about a non-profit organization called Peace Sisters at an event led by the organization’s founder, Tina Kampor. Tina talked about having been an educator in Togo, West Africa before moving to the US and becoming a nurse. She explained that past the fifth grade, it costs forty dollars a year to continue educating a girl in Togo, which forces many girls to drop out. Before founding Peace Sisters, Tina sent money back to Togo herself, and helped to educate over a hundred girls.

I was so moved, and my birthday was coming up, so I did a GoFundMe campaign for Peace Sisters. Getting more involved with the organization led me to create Tees 4 Togo, a line of sweatshop-free T-shirts that sell for forty dollars a piece, which funds a year’s worth of tuition. The subjects and artists are a combination of people I already knew and those I reached out to because I’ve admired their work. The process was really organic—though sometimes I had a specific idea or image in my mind of how the shirt should look. I wanted the W. Kamau Bell shirt to capture the amazing sparkle in his eyes so I reached out to my friend, the tattoo artist Eric Adams, who’s known for his realistic portraits. For Kim Gordon’s shirt, I asked the musician Steve Dore, who’s done a lot of fun graphics for bands, to do a pen and ink drawing.

As a musician, whenever I’ve put an album together, I’ve always liked the songs to sound pretty different from each other, like an interesting compilation. The same is true for Tees 4 Togo. I think clothing is best when it brings people together, and especially when it empowers them.

The musician, artist, and feminist activist Kathleen Hanna is best known for her groundbreaking performances as a member of the 90s punk band, Bikini Kill, her multimedia group, Le Tigre, and her current musical project the Julie Ruin, which has released two albums in 2013 and 2016 respectively. The Punk Singer, a documentary about Hanna’s life, premiered at festivals and saw a nationwide theatrical release in 2013.

Bikini Kill are thrilled to announce they will be regrouping to play shows in NY and LA this spring. They will perform with their iconic line-up of Kathleen Hanna on vocals, Tobi Vail on drums, and Kathi Wilcox on bass—along with guitarist Erica Dawn Lyle.