Whenever anyone asks what kind of music I like, I freeze up. The question’s always felt too personal when asked by a stranger taking my cab or ordering a drink at my bar, and too open-ended when asked by someone I know. There’s too much to say, so I say nothing. Music has haunted me my whole life.

Like most children of Soviet intelligentsia, I was forced to start playing a musical instrument when I was five or six. Mine was a piccolo flute. I remember taking it apart and putting it back together, and that its case had a blue velvet lining. I have no memory of making music with it. About a half year after starting to play, my teacher left, and it was determined that I was “too talented” to stay with such a minor instrument. The school decided to “promote” me to violin.

I had a music folder with a flap that tied closed with a ribbon which my father would pull open over and over on the way home from class. That’s how I learned to tie my shoes and it’s the only positive association I have with music lessons or that instrument. I hated the awkward, uneven way it had to be held and the screeching it made when played badly. Nails on a chalkboard is an angel’s aria next to a misplayed violin. It is an unforgiving, neurotic instrument. I hated to even open its case. After we moved to the United States in 1978 I went through a succession of unfortunate violin teachers. Unfortunate because they had to teach me and deal with my temper tantrums and my all-out effort to play as little as possible. My poor mother, whose unfulfilled musical ambitions were apparently sated vicariously through my torment, had to deal with a lot as well. I broke two bows flinging them against the wall; that would get me out of practicing, at least for the afternoon. She would try to tape and glue them back together before wasting more money on replacements. I begged to quit every one of the eight years she made me play.

The last teacher I had was a Russian woman who played in the Boston Symphony. I can’t say whether she was as uninterested in teaching me as I was in learning from her; it was likely a dead heat. In any case, she never put up much protest when I’d call a half hour before our lesson and cancel so that I could blow the $40 my mother gave me on video games and pizza. It was one of my most successful scams, though I had to be careful not to do it too often and risk getting caught. At fourteen my mother finally gave in and let me stop.

I still occasionally get nervous when hearing a violin. But I wasn’t done with music. I spent my first paycheck from my paper route in 1982 on two cassettes: The Rocky III soundtrack and Abracadabra by the Steve Miller Band. In sixth or seventh grade my best friend’s father—an old Deadhead—helped broaden my horizons. Now I was balancing what I heard on 80s Top 40 radio with the Velvet Underground, Captain Beefheart, and the Stooges. Nothing like alternating Pyromania with Trout Mask Replica to make a strange kid even stranger.

My father was always singing the Soviet songs of his youth, especially while driving. My folks played Vysotsky, Okudzhava, and the Beatles’ Greatest Hits on the record player. There was always a soundtrack but little direct communication growing up. The music was what got through to me best anyway.

Boston record stores like Nuggets and In Your Ear were regular spots for spending whatever money I had, whether earned or stolen. I’d buy records, dub them onto cassette, and trade them in for new ones. It was an endless cycle. I still have a crate filled with these cassettes. Many are too worn to play, but they’re as close to a diary of my teenage years as I’ve got.

The movie theater I worked at in the late 80s was run by a man named David Kleiler. His son was in a band called the Volcano Suns. This was likely my first personal contact with a person who made music that I loved. Up until then the idea that the people making the records I bought were people I could talk to never crossed my mind. Through David Jr. I met Peter Prescott. We would talk about movies. He told me once that Martin Scorsese’s New York, New York was the best film ever made about the musician’s life. I’d track him down at whatever record store he was working at in Boston anytime I visited my family. In 1989, I went to New York, then Chicago for art school, and going to shows remained at least as important as visiting the Met or the Art Institute. I graduated in 1993, moved back to Boston, and started driving a cab. Going to the Middle East, t.t. the bear’s, and other clubs likely saved me from offing myself. As Peter said, “Boston’s a good place to be in a funk.” I returned to Chicago in 1997 for good, but bands from Boston are still close to my heart.

I had drawn people playing music before, but sometime in the late 90s it became a regular part of my concert-going routine. It was a way to listen better, to make the sounds closer, to bring it more into my own world. The intent of these sketches has never primarily been to nail a likeness but rather to show a bit of what it was like to be in the room with those people on stage on that night.

Once in 2009, Chicago artist Tony Fitzpatrick summoned me to his studio. I was driving him around nearly every day, but that day he needed me to give Lou Reed a ride back to the Trump Hotel. I spent the whole ride downtown silently searching my mind for something to say to the man that wouldn’t sound completely sycophantic. What do you say to Lou Reed? I murmured something like, “Thanks for the music,” as he was getting out of the cab. I think he thanked me.

A few years back I traded a large drawing for guitar lessons with my friend Bill MacKay. It was odd to hold an instrument again and make sounds come out of it. It was good because it’s an instrument whose sounds I actually enjoy. I stopped practicing for lack of time but hope to take it up again one day. Bill tells me I’ve still got some free lessons coming. One of these days I’ll take him up on that. 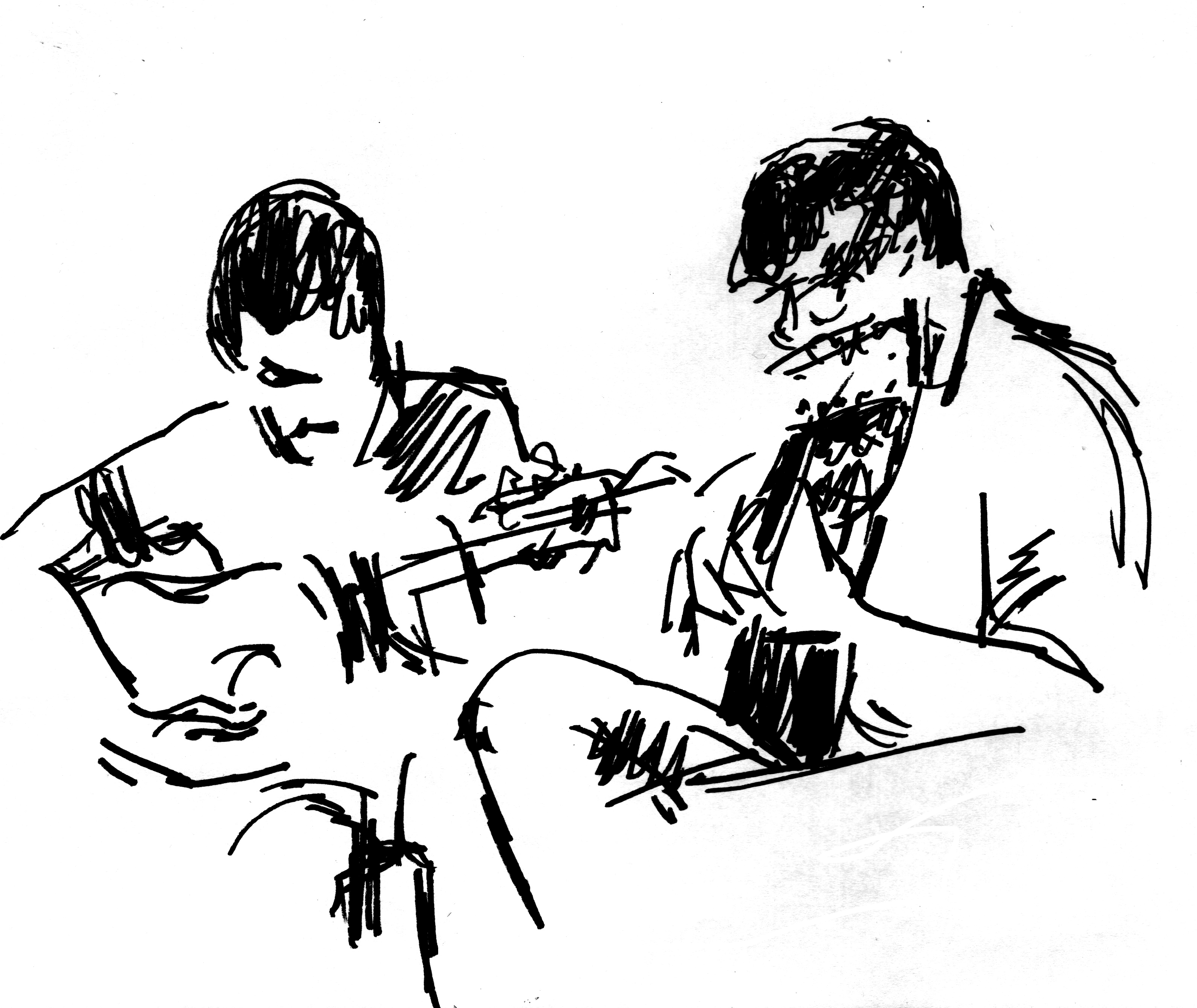 I’ve had the good fortune to work with many amazing musicians on record covers, flyers, and assorted other projects. I count many as friends, and usually prefer their company to that of visual artists.

My mother’s always told me that I could’ve chosen either music or painting. Who knows if that’s so? All I know is that I can’t paint or draw without music playing, and that when someone asks what kind of music I like, I get defensive. More times than not I don’t answer at all. It’s too personal. If it was asked in the cab, I told them I don’t listen to music on the radio, then gritted my teeth and tried to endure the horrible radio music they’d insist on for the rest of the ride. But at the bar where I bartend every Sunday, I choose what comes out of the speakers all night. It’s the next best thing to being in some dark club with my sketchbook, absorbed in the sound and feel of a live performance, trying to catch it with a few pen strokes.

Excerpted from Music to My Eyes, © 2019 by Dmitry Samarov. Reprinted with permission of the author and Tortoise Books.

Dmitry Samarov paints and writes in Chicago. He is the author and illustrator of five books. He sends out a newsletter every Monday. An absurd amount of his work is collected at his website, which is sixteen years old now. More from this author →