Like everybody, I watch a lot of television. I’m fifty-three years old, so in the course of my life I’ve spent say fifty-two years watching TV, and in all that time there have been a lot of great shows. But 30 Rock stands out for me because it was kind, funny, quick, smart, and insightful. I was also introduced to it at a time when I was bottoming out as an alcoholic and drug addict.

In the summer of 2008, right before I starting getting sober, I think the part of my brain that loved alcohol and drugs knew that the end of my drinking and drug taking was approaching, and it almost compelled me to drink more and do more drugs. It was almost like premature separation anxiety.

I was on tour at the time, and I was traveling from time zone to time zone. And I’ve always battled sleeplessness. Everything together, I was in a state of almost constant insomnia. Apart from being the greatest TV show ever written, one of the things I loved about 30 Rock was that as I was going through this period, I had the DVDs with me.

I would spend my early mornings watching the show over and over again in my hotel room as I was either battling insomnia or being drunk and high from the night before. I was losing my mind, but watching gave me a sense of stability and comfort. I started to think of the people on the show as my friends and family. It was hard to imagine a day without checking in on 30 Rock because I felt such an emotional connection. 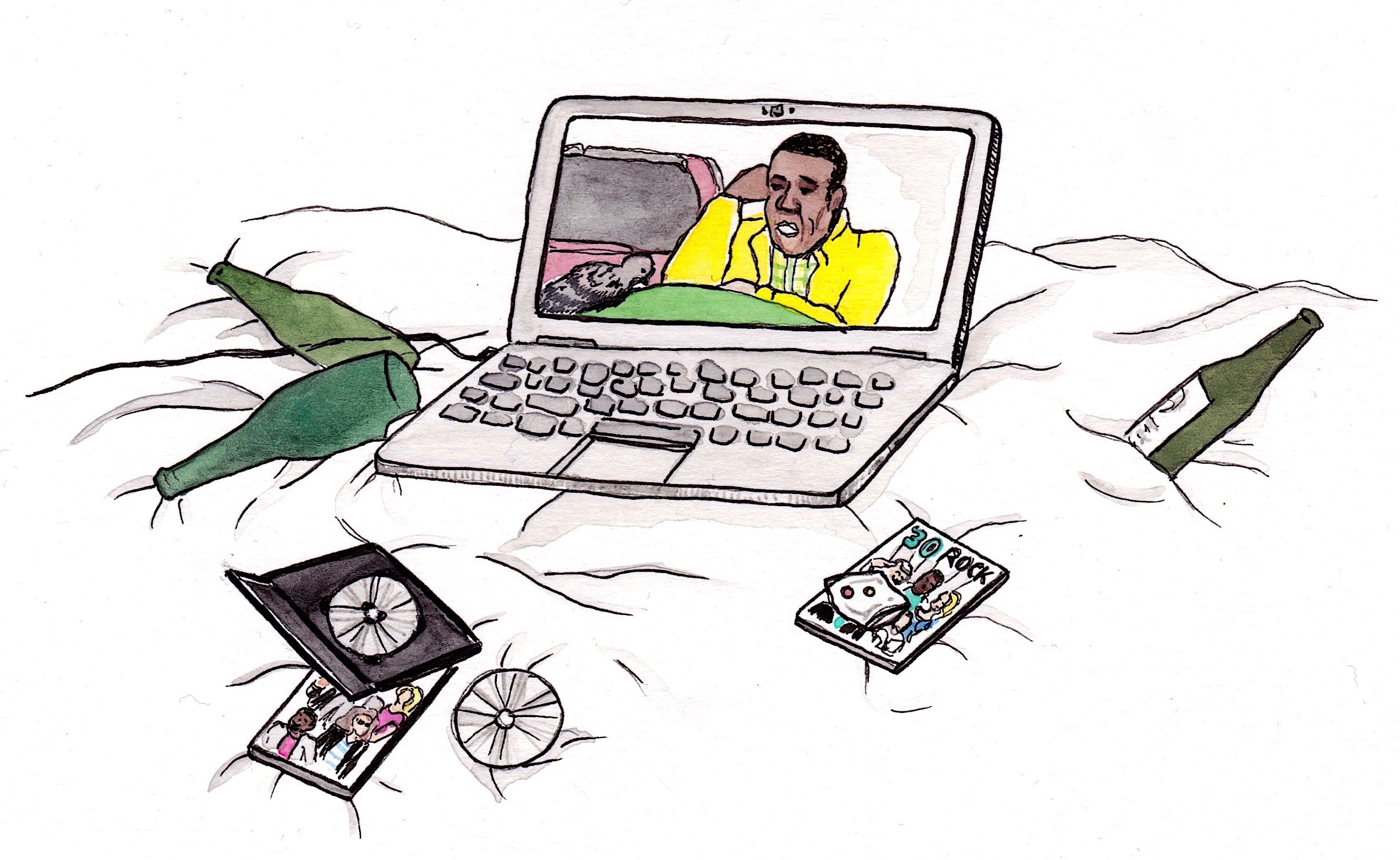 When I was growing up, I had always assumed there was this binary hierarchy, where I would read other people’s books, listen to other people’s records, and watch other people’s movies and TV shows, but never know them as human beings.

As an aspiring musician, I thought I’d spend my life working on music that no one ever heard. I never thought I’d have a record deal. I never thought I’d ever make records, and certainly never thought I’d encounter any of my heroes. But one of the strangest aspects of becoming a public figure is that you do get to meet your heroes in real life. I’ve had the weirdest experiences, like spending Christmas with David Bowie and going to David Lynch’s wedding.

And there’s also been a recurring phenomenon where my managers call me with the most unusual requests. Once one of them phoned me and started saying, “We got a call from a talent manager at 30 Rock…”

They were asking if I’d want to appear in a cameo on the show. I pretty much said yes while they were still asking. In fact, if they’d asked me if I wanted to make coffee for Kenneth the page, I would have said yes.

I remember taking the car service out to the studio in Queens on the day of the shoot. By then I was newly sober. It was so wonderful and disconcerting for me to step into the world of the show, this three-dimensional, flesh and blood world that was populated by real people—the same world that I’d been obsessively living in emotionally as I was bottoming out and then also as I was getting sober.

At the same time, I was surprised to discover that the whole set was constructed. I kind of assumed when I was watching the show that they found an office that looked like Jack Donaghy’s office and shot there. And I thought the scenes they shot in the hallways at 30 Rock were shot in the hallways of the actual 30 Rock. Backstage at SNL looks the same as the real SNL backstage, but it’s set up on a soundstage. The New York City you see from Jack’s office is just painted onto the windows. Even the lighting is artificial. It really was art imitating life imitating art imitating life. It felt like standing in front of one of those barbershop mirrors where the mirror reflects itself. Everything on the set was built. But they recreated it all perfectly!

It didn’t compromise my love for the show at all. It’s sort of like encountering words on a piece of paper, or on a screen. They’re used to describe things, but if our brains like what they are seeing, we become fully immersed in the narrative, in the story. If you came to me and said, “Spoiler alert: Fiction isn’t real,” it wouldn’t spoil my love for it. In a way, being on the show gave me an appreciation for how good a job they did at crafting this fiction, creating this world.

30 Rock is over now, and I don’t have a DVD player anymore, but I can still stream the show any time I want to. At most I’ll let myself watch three episodes at a stretch these days, so it’s always fresh. Sometimes I will watch an episode, and they’ll reference things, like the time before Obama was president, and I’ll have to remind myself there even was a time before he was elected.

Sometimes watching 30 Rock feels like listening to the Beatles, where you realize that every song is perfect. I’m always grateful for great content, but that’s not all there is to it. The fact that 30 Rock was my constant companion when I was bottoming out, and then later when I was getting sober, gives me such a sense of gratitude, one that I don’t think I have for anything else.

Richard Melville Hall, better known as Moby, is a musician, singer, songwriter, producer, animal rights activist, and author. He has sold an estimated twenty million records worldwide, and he has published two memoirs, including 2016’s Porcelain, and the just released follow up Then It Fell Apart, which the Chicago Tribune has hailed as a “particularly incisive look at not just a life in music, but at the cultural and social circumstances that helped shape it.” Moby is currently on book tour.