The PEN/Robert J. Dau Short Story Prize for Emerging Writers recognizes twelve emerging fiction writers each year for their debut short story published in a literary magazine or cultural website last year and aims to support the launch of their careers as fiction writers.

Each of the twelve winning writers receives a cash prize of $2,000 and the independent book publisher Catapult publishes the twelve winning stories in an annual anthology entitled The PEN America Best Debut Short Stories, which will acknowledge the literary magazines and websites where the stories were originally published.

Click here for additional information, including submission guidelines, for the award.

Below, 2019 winners share books that have inspired them in their journeys as writers and/or have helped to shape the work they do. The PEN America Best Debut Short Stories 2019 is out now from Catapult, and you can read editor Yuka Igarashi’s introduction here.

Sing, Unburied, Sing by Jesmyn Ward
What I love about Jesmyn Ward’s fiction is how effortless her writing feels. The language is lyrical and stunning without being inaccessible. Every book she writes is inspiring to read, but the ending of Sing, Unburied, Sing is one of my favorites ever. The last few pages beautifully tie together many of the themes the novel has been considering—nature, generational trauma, spirituality—to create a final, breathtaking image. 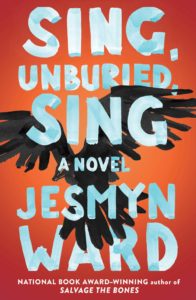 Sputnik Sweetheart by Haruki Murakami
Sputnik Sweetheart is a book I return to time and time again. One winter’s night, near Christmas, a copy was left on my porch. I was delighted to find it. I was alone in a big house and it filled me with beauty and loneliness. I was blown away. Murakami can be incredibly surreal, but this is one of his more straightforward books. Its magical realism is softer and mostly unspoken. When a young writer, Sumire, disappears on a Greek island it feels possible that Sumire has disappeared into an unworldly place, though she has likely just secreted herself away. I love that feeling of possibility, the looming unknown. Swann’s Way by Marcel Proust
Proust is infuriating (how can someone write like that?), delusionally contagious (maybe I can write like that?), and transcendent (who cares? I just want to read it!). Proust is also hilarious. He writes a bang-on description of an obsequious man’s butt cheeks undulating as he bows and straightens that I will never forget as long as I live. Comedy aside, after reading Proust, I feel more tenderness toward those around me, I am more attentive in my own life, which is really what I hope my fiction accomplishes. How I Became a Nun by César Aira
I was introduced to Aira through his short story “The Musical Brain,” which appeared in the New Yorker. How I Became a Nun was the first of Aira’s short novels I read, and I quickly became obsessed. Like many of his stories, How I Became a Nun tells an alternate tale of Aira’s upbringing, and I’ve always been drawn to the pseudo-autobiographical. But it’s Aira’s writing style and method that really inspire me, because Aira only writes forward; he never goes back and revises. He writes himself out of any corners he gets into. His stories and novels are like improv theater in written form, twisting and turning in ways that are thrilling, delightful, and surprising. Braiding Sweetgrass: Indigenous Wisdom, Scientific Knowledge, and the Teaching of Plants by Robin Wall Kimmerer
Robin Wall Kimmerer is a gorgeous storyteller and a wise, generous teacher. Her writing has helped me connect to the land I live on in an authentic way, as a great-granddaughter of settler-colonialists who arrived in this country from opposite sides of the globe: Japan and Germany. This book requires us to reflect on the love we have for the natural world, how it might love us back, and what our responsibilities are to it. Kimmerer’s writing moves me to thoughtful and defiant action. A Sportsman’s Sketches by Ivan Turgenev
It’s incredibly even more difficult to find substance in the ordinary. The stories in this book may seem simple, even casual in tone, but there’s something underneath the seemingly innocent observations of rural people and the land—with all the senses deftly deployed in the description of action. Sometimes apprehension bubbles to the surface; other times violence seems imminent in the narrator’s encounters with what, ultimately, is the reader’s own life. The more I read, the more I realized that this was seductively showcasing how the life of the other is really one’s own life. Take this sentence from a story:

Strange things happen on this earth: you can live a long while with someone and be on the friendliest of terms, and yet you’ll never once talk openly with him, from the depths of your soul; while with someone else you may scarcely have met, at one glance, whether you to him or he to you, just as in a confessional, you’ll blurt out the story of your life.

I shall spare you the usual superlatives, but know that the lyricism of this book will win you over first.

Housekeeping by Marilyn Robinson
This novel builds in symphonic-like movements, gathering complexity and force as Ruth tallies her loss the way some children collect dolls. But many sweet, beautiful refrains live in between these hard moments. I’m especially drawn to how Ruthie relates to Lucile, how their relationship expands and shifts both in reality and in Ruth’s mind, and to how Ruth comes to deliberate on the meaning of memories, stories, theology, and faith. For a novel so rich in descriptions, setting, and interior landscape, I often return to reread the many dialogues to find inspiration, or a chuckle—or both. Incubation: A Space for Monsters by Bhanu Kapil
For most of my writing degree, I didn’t think I liked poetry—I didn’t “get it” or enjoy it. Then I took a class with the poet Joseph Lease, who told me I just hadn’t found my poet yet, and after he got to know me he recommended Kapil. Reading Incubation opened me to poetry, and I always find myself returning to it for inspiration or a shift of perspective. Bobcat and Other Stories by Rebecca Lee
This collection is written with an oddball realism unique to Rebecca Lee. Each time I reread her work, I’m wrecked by the certainty that I’ll never be able to write a story as funny, brilliant, and moving as “Slatland” or “Bobcat.” But she’s a writer who excites me to try.