We’re thrilled to bring you this exclusive first look at the cover of Lee Matalone’s debut novel, Home Making, forthcoming from Harper Perennial in February 2020.

Below, book designer Robin Bilardello discusses how the book’s cover came to be followed by the cover itself. Then, enjoy an exclusive excerpt from Home Making. Finally, place your pre-order today to make certain the book reaches you in February!

“While slicing tomatoes, Pat told me he was sick. The fruits were firm and juicy, beautiful yellow things fresh from our garden. He felt that, though doctors were cautiously hopeful, he could not be. We had built the garden only a year before, our shared project, a place that could bear fruit for a future generation. He needed to wait his death out alone. Even their skin smelled fragrant. From his private island, our home, he would watch it come closer and closer, sitting solo on the shore as the ship puttered into port. The juice, it was so sweet.” – Home Making

The book’s cover features a painting called “Fruit” by Grace Helmer. In it, the artist includes corn, carrots, and a mushroom (it really should be called “Fruit and Veggies” if you ask me). The painting finds harmony among the diverse range of food, which is what initially drew me to it. The color is rich, and the smudged details add subtext. The fruit and vegetables dance around the composition—each one so different—yet they all belong.

In the book, Matalone writes about home—what it means to be there and what it means to create one. As I worked on the cover, I tried another painting as an option: “Basket of Tomatoes” by Nora Summers. It’s lovely—mostly blue and red—but it’s only tomatoes. Though the novel includes a subtle, powerful scene in which a character slices tomatoes, the image lacked the fullness I admired in Helmer’s painting. The ensemble of fruits and vegetables worked better for this book, and moved me to present it. The editor, publisher, and author approved. 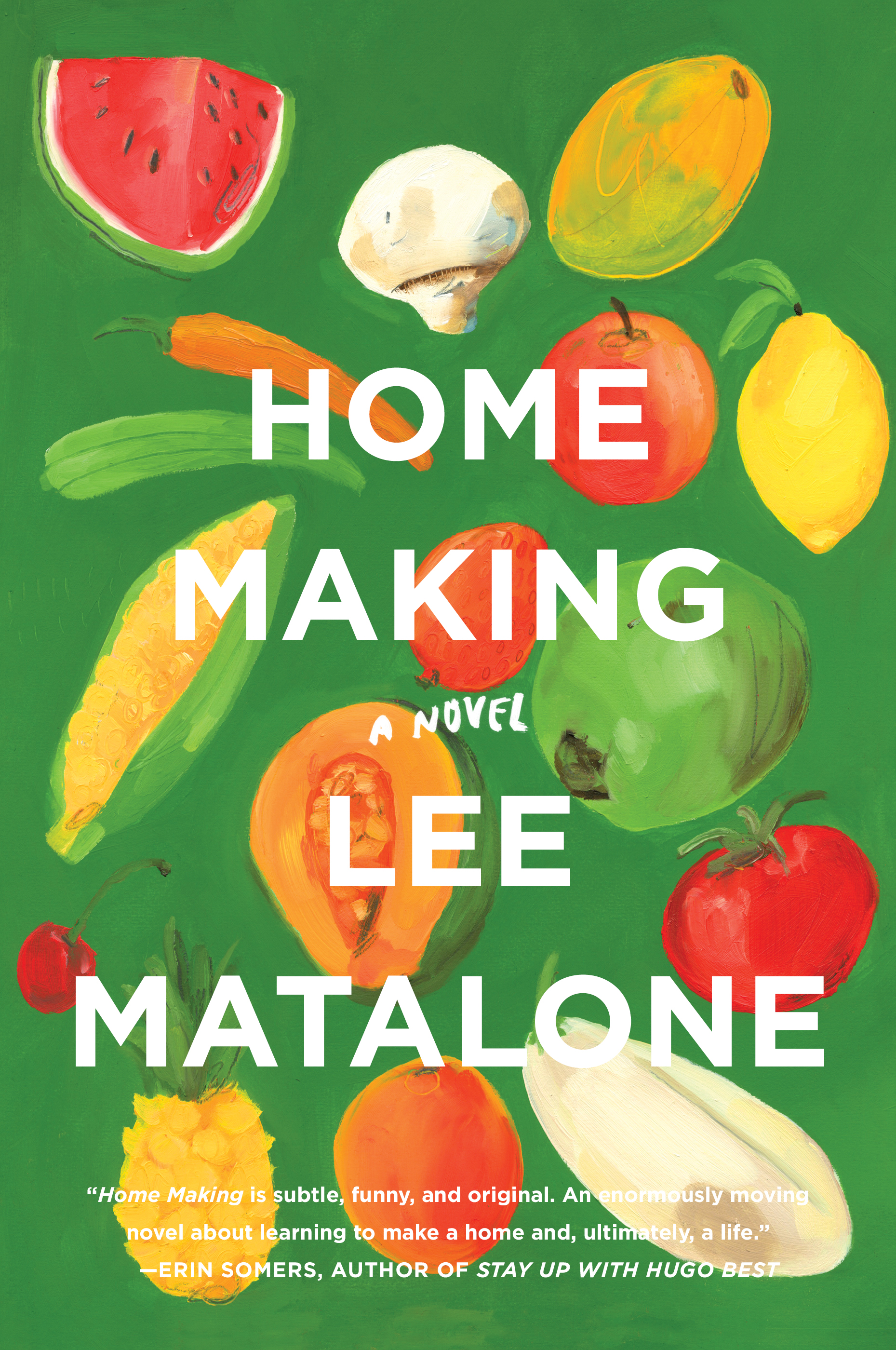 I want to build a home. Or, rather, I want to take this existing house and turn it into something where happiness can bloom. I will start with one room, stripping the yellowed wallpaper, melting and scrubbing old glue in yellow gloves. Or do I start with the floors? Do I have to refinish the floors first, so that the shavings don’t scratch up the fresh paint? Maybe I have that backwards. Maybe I should paint first, and then do the floors, so that the paint doesn’t drip onto the newly refinished wood.

I built a home once, not so long ago, but I have forgotten the how-to’s. How to re-grout shower tile. How to hang a picture on a stud. As if my brain has decided that recollecting was detrimental to my survival.

Someone built this house for a family. I constantly feel like I’m intruding on someone else’s domestic life. Every time I forget to turn off the faucet when I’m boiling water, I think that a mother will run over and chastise me. When I play music late at night, I feel like a little boy will come down the stairs, onesie-feet padding on the hardwood, and say “I’m trying to sleep. Will you please turn that down?”

This doesn’t feel like my home, I tell people. Part of me knows that this wasn’t built for me.

I have only been in the attic once, when the realtor first showed me the house. I asked her to take me up there, so she pulled the red string and we walked up the creaky wooden stairs and ascended into a dark dusty and empty space. No old trunks or rocking chairs left behind by the former owners. Just vacancy.

But I have not been up there since. What would I do if I stepped on a rusty nail and couldn’t get back down? Would anyone find me up there?

Living alone requires an extra level of pragmatism. Lock the doors. Check the carbon monoxide detector’s batteries. Read the labels on the pills before swallowing them in the haze of two in the morning, as there will be no one to find you.

Peanut butter. Coffee. Bread. Toilet paper. I text Beau with a list. He is running my errands, performing the tasks of domesticity I am not yet ready to perform on my own.

It took ten years for Herman Wallace to decide what he wanted his home to look like. After thirty years in solitary confinement (for a murder he did not commit), Wallace received a letter from an art student at a West Coast collegiate temple. She wanted to know, “What kind of house do you, a man who lives in a six-foot-by-nine-foot cell, dream of?”

While living in a cell at Angola, that notorious modern plantation, he dreamt of tulips, Adirondacks perched on a second floor balcony, portraits of Tubman, Turner, Brown, a bathtub as big as his cell of confinement, windows, windows, windows. For ten years, he contemplated what his conception of home looked like.

“In front of the house,” he wrote to her, “I have three squares of gardens. The gardens are the easiest to imagine. I would like for guests to smile and walk through flowers all year long.”

This is my duty: to realize the fullness of this task.

Objects contain parts of the people who own them. Though my mother’s adoptive mother died before I had a chance to know her, her emerald earrings still gleam with a hint of her cruelty. With Pat, what is left of our philosophical disagreements is contained in a coffee table book of dilapidated barns and wooden houses taken over by grasses and wildflowers.

“That’s something I can’t settle with,” Pat, my sick husband, once said. “The fact that people are obsessed with decaying buildings and dying cities.”

“You can’t deny that an old barn is beautiful,” I said.

“But the fact that people find it beautiful says something. People find beauty in loss. At what point does that quest for death become a self-fulfilling prophecy?”

When people go, the things they leave behind can feel haunted. A father can take your left ventricle and a husband can take your frontal lobe, leaving behind a tea kettle, a lamp shade from Bed Bath & Beyond. A wooden spoon can hold the existential weight of a family Bible while you turn into a shell.

I’ve always fantasized about homes. I’ve drawn out versions of my fantasy-dwelling in sketchbooks and on notepads while sitting on a tattered mid-century couch in a bungalow I wished were mine. In my early twenties, pre-Pat, I travelled around the country in search of the perfect town where I could put down roots. Renting in some town in some other person’s house, I would have fantasies of ripping out the kitchen cabinets and placing open shelves where I could display my cookbooks and stack my white plates, where I could set a planter containing a single stem of purple orchids.

In the Times, there is an article about people who get very attached to houses, as if loving a house were a peculiar thing. I click on the headline, but I do not read a word.

I thought our home was a castle. I thought those walls could keep us safe.

home away from home

run away from home

Just as President Kubitschek constructed Brasilia in the hopes that its Niemeyers would usher in an age of Modern values, I can build this house in the shapes that will foster my own ideals. Niemeyer thought that the aeroespacial curves of his buildings could bring progress to Brasil’s forests. The stark white concrete pillars could teach reason and order to the people of undeveloped Brasil (an interesting, if not disturbing idea, colonizing the mind through architecture).

I can set the kitchen table for four. I can make sure the bed in the guest room is always made.

That’s all you need? Beau texts back.

That can’t be all you need, he texts. Tell me what you need.

Consider it building a watchtower, I tell people when they ask why I bought a house so close to where Pat and I once shared a home. If he will not let me be with him while he dies, then I can make sure that nothing or no one else can hurt him. From here, I can still feel like I am doing my duty, like I am being the wife.

Mom and Beau keep telling me not to rush things. One room at a time, they tell me.

But I’m not trying to build an entire city, I tell them. I’m just trying to rearrange these pieces of my life and turn them into something that resembles a home.

One room, they reiterate. Start with the space with the smallest square footage and work up from there. Think of Rome, they say.

I am unblacking my teeth, a white strip adhered to my smile. Beau stands in the doorframe of the bathroom, flipping through a celebrity rag, while I hover over the sink, the blue cardboard box with its disembodied mouth glaring up at me from the basin. Beau says that my teeth are big and beautiful and that when I feel like smiling again my smile should glisten. He does not say, smile, as some men do. He just says, when you feel like smiling again, you should glow, baby. He says, in that edifying way of his, that Japanese women, upon marriage, once painted their teeth black, a sign of their commitment. I say, actually, I told you that, Beau. Nice try.