I used to think being a pirate radio DJ was important, that this made me special in some way: a dissident, a rebel, subversive. I considered pirate radio a resistance to conventional life, whatever the prevalent notion of the ordinary. Though I have an inclination to denigrate my tiny world, subject it to insignificance, disruption from the customary carries gravity and surprise. Like here. But ultimately, I was avoiding sameness.

The station—a sixteen-foot trailer on wheels with poor ventilation and flat tires—was located in the trees on a spread of land shared with a preschool and playground, a garden and swing set, next to a cannabis farm and cattle ranch, surrounded by public land and second growth timber cuts.

It was there—at the station, on the land, by the school, next to the cows—I met the radio man. M_ played hip hop at midnight on a Tuesday, lived in a cabin in the high mountains, bookshelves lined with Noam Chomsky, Chuck Palahniuk, Derrick Jensen. His fence was broken, but you could see the stars just fine. It all started when I was late into a night of drinking with a beautiful friend, S_, whom I secretly desired (broad shoulders, six feet in height, hikers’ calves, and hands with many lines)—the stars thin, the October night very cold. We smoked joints and drank beer while he listed off Free Will Radio’s diversity of shows—Americana, Heavy Metal, Bluegrass, Hip-Hop, Dr. Science on Wednesdays. He said, “You should do it. You’d be good.” Ever since I was a small child, I’ve searched for the bolder experience, craved the contemporary sophistication. I’ve never held a job for more than five years. I read obsessively for want of knowledge. It is difficult for me to sit through a film, even a very good one. I become distracted easily when something new comes along. And, too, I like to be noticed and this collective of anarchist men running an illegal station in the woods was just the distraction I craved. I knew I’d be great at this endeavor: wooing listeners with Bikini Kill rioting on the airwaves, talking stories on air, drinking red wine from mason jars. I am also easily flattered.

My show aired on Sunday nights, so when the sun dipped behind the mountains, when a cast of shadows appeared on the driveway like a collection of actors ready to play out a scene, I drove my diesel truck to the station to play music to the few who listened: some on the frequency, some tuned in through the online streaming application—maybe several, or ten, twenty listeners. I liked listeners, of course—they mattered to me—and over time, my audience grew, but what mattered entirely, which was so utterly important to me, was that Free Will Radio was free.

It didn’t take but a week for me to design a show: The Knotty Edge, a mix of indie, punk, neo-soul, and electro-pop—Cat Power, Shakey Graves, Sylvan Esso, Karen O—with a bit of story and poetry thrown in as accessory entertainment. Even now, I still return to the same mixes as a way through memory. To remember.

Pirate radio breaks genre, moves out to new ground, making tracks in the woods like a fox. Pirate radio is a middle finger at the institution of radio.

No one knew where the station was located, just a few trusted friends who wouldn’t leak the secret, though I brought my children there before school and let them wear the headphones and move the buttons on the soundboard. I never told them not to tell. Free Will Radio remained nebulous, hidden, something to intrigue and discover, echoing a register and chronicle of low bass and lyricism stretched out between the stars. 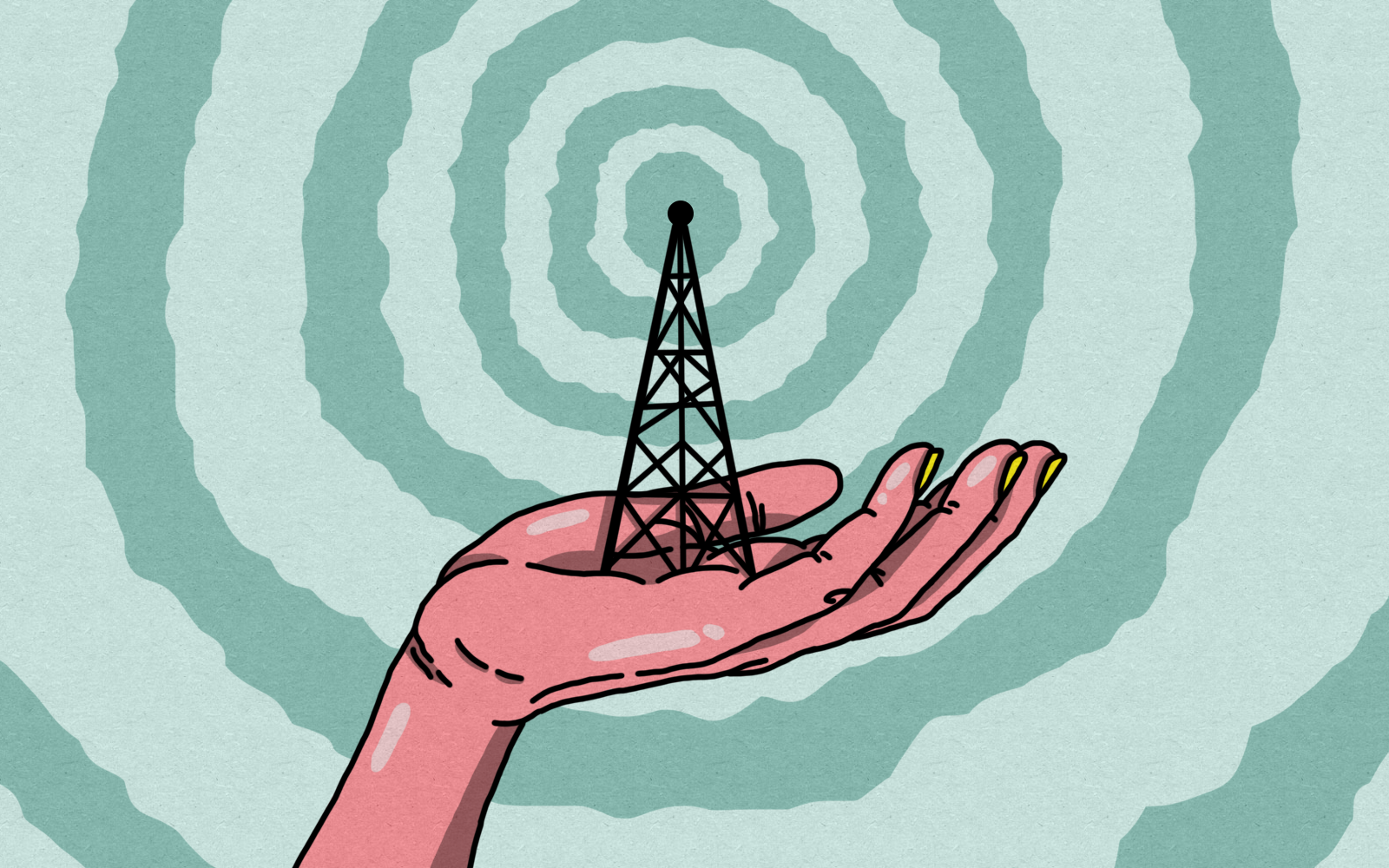 I brought M_ beer to his radio show. I left him music on a flash drive. I sent him emails faking questions so he might talk to me. I gave him my number. I flirted with him at the local taco shop while Josh drank beer across the room and managed our children’s chaos.

On my show, I said and did what I wanted, except for three rules: I could never talk about anything political, I couldn’t curse before 10 p.m., and the geographical location could never be disclosed. But even those rules were regularly broken. I often forgot and said “fuck” on the air, usually right after I started at 8 p.m.

To woo M_, I brought him a book of hip-hop poetry from the Nuyoricans, lines and rhymes I thought might capture his attention, with a note signed with my DJ name, Mazzy Maple. I didn’t know him, had only listened to his show and heard him talk about Kurt Vonnegut and play soulful hip-hop like nothing I’d heard before: J Dilla and D’Angelo, Talib Kweli, Erykah Badu. I thought maybe he was a poet.

While at the local store buying a six-pack with Ava in tow, the school bus racing by out the window scraping the highway toward homes and dinners, a friend stopped me. “I heard you last night on the dial. I loved that one tune. The one with the fiddle. And the Kills, too. So good!” Sometimes in the school yard picking up Ava: “I was driving home last night and heard you playing Patti Smith. Turned it up loud!” Or I’d receive a message on Facebook: “I just have to write and tell you how much I love your radio show. I discovered so much new music within a half-hour. Thank you!” I was my own local radio star, which stroked my ego and fueled my love for fame. David Bowie crooned, “Fame, it’s not your brain, it’s just the flame that burns your change to keep you insane.” Always I want to be seen. Always to burn. If only to heed Virginia Woolf’s advice to “go on adventuring, changing, opening my mind and my eyes, refusing to be stamped and stereotyped. The thing is to free one’s self: to let it find its dimensions, not be impeded.”

How to explain the ways radio filled me: the nuance of desire, of waves and vibration, both sound and longing, the need to create a charge of want, to stretch heat and flush over the surge of radio. How when I thought or knew M_  was listening, there was nothing else. How when I played, I shuddered with nerve and pleasure and all thrill. Music was the in-between filling the spaces before we met, before touch. A conduit. A friend designed a seasonal radio flyer for me to reflect the change in mood and temperature. The posters were seductive with pictures of women and lips and headphones, something to evoke Nina Simone singing “Gin House Blues” with her head wrapped in a scarf and a cigarette on the piano. I liked to tell stories with my Facebook posts accompanied by pictures of Joan Jett, Deborah Harry, microphones, hearts streaming chords, women smoking bongs, old ladies dancing to rock ‘n roll, or memes that declared: “Warning: Punk music may cause creativity.” Sometimes, I’d theme a show: Because I’m feeling edgy and because the influence of the Aries new moon has everyone fired up, tonight’s The Knotty Edge is all blues, all rock, all guitars, posted with a picture of the Black Keys looking cool and mean in black and white. Or: I’m celebrating Easter with beer, Twizzlers, and Nina Simone, among others. I thought about the descriptions the week before my show, thinking how I might impress, how I’d arrange the music, how I’d entice people to listen. I suppose it was a puzzle for recognition.

Something then about breaking rules. Fragments, which are sentences and not sentences. “Note: the passive voice has often been criticized as something employed by people in power to avoid responsibility.” I must be a liability then, to literature, and radio, probably both, and maybe marriage, too.

“It is important to start by recognizing the truth about pirate radio stations. They are not cute; they are not filling a niche; they are not innovation test beds; and they are not training grounds for future broadcasters.” – Michael O’Rielly, FCC Commissioner, April 8, 2015

Victor Hugo wrote, “Music expresses that which cannot be put into words and that which cannot remain silent.” Discover that tonight on The Knotty Edge as I play another beautiful mix of new music and old favorites at 8 p.m. until 10:30 p.m. on www.freewillradio.org. Stream live every Sunday night. #communityradio

Fake turf carpet covered the ground in front of the station to soak up the rain and to provide a certain backwoods aesthetic, or maybe it was meant to be ironic. We pitched an old coffee can to the side for cigarette butts. There was one folding chair, a tarp for an overhang. The trailer itself was surrounded by a circle of fir and madrone, the neighbor’s field an expanse of hay and seed. Inside, posters covered the ceiling—Prince splayed in some stretchy, spandex thing. Bumper stickers glued to the walls: Fuck the police, Fire to the prisons. The History of Rock N Roll sat moldy on the speaker. Someone hung a framed cross-stitch of a kitten mewing for attention and the front window had broken long ago. Even with duct tape, still, cold air came in. No one bothered to fix it. It was small in there, tight, cozy, with a bar chair and cushions for the benches, a space heater or fan, depending on the season. Compartments above held bongs, tobacco, lighters, weed, toilet paper. Beer cans littered the floor and benches. The air contained a kind of stale smoke quality mixed with sweat and beer.

I was breaking new terrain by exploring the fragile and dangerous strand of want. I wanted anarchy in identity. I wanted everything that I wasn’t already. I wanted to upset that comfortable notion of home and head straight into longing.

Melissa Matthewson is the author of a memoir-in-essays, Tracing the Desire Line (Split/Lip Press, 2019), a finalist for the 2021 Oregon Book Award in creative nonfiction. Her work has appeared, or is forthcoming, in Guernica, Longreads, Oregon Humanities, Literary Hub, The Common, DIAGRAM, and American Literary Review, among other publications. She teaches in the MFA Creative Writing program at Eastern Oregon University and in the Communication program at Southern Oregon University. Find her on Twitter at @melmatthewson and Instagram at @mazzymaple. More from this author →