I used to think of anger as a sickness, something I should expel from my body as quickly as possible. Even when I had every reason to be angry—even when I had been wronged, or when I was reacting to large-scale injustice—I believed, as I had been taught to believe, that I could only accomplish my goals if I first set aside my anger. I could only plead the case for my own humanity if I did so calmly, even sweetly. I could only organize and fight for a better world if I did so rationally, with a cool head. Anger got in the way; when I was angry, I couldn’t expect to be taken seriously. That was what I had been told, anyway. Sometimes explicitly, by boyfriends and teachers, people for whom my anger was an inconvenience; but also implicitly, by the reactions I saw when other women dared raise their voices or make demands.

Even when I became more secure in my perceptions and understood that my anger was justified, I still thought of it as a problem to solve. I looked for ways to replace anger with action, to forgive and let it go and find peace—and all the other placating aphorisms that keep women in their places. I had a right to be angry, but my anger was still a burden, something to work through and eventually release.

While editing Burn It Down, my new anthology of essays on women’s anger, I learned something that I’d long suspected but had been unable to articulate: that anger is not inherently negative. Anger, I finally understand, is a source of power. Anger makes us stronger, bigger, louder—all things that society doesn’t want women to be. That’s why they tell us to rid ourselves of it. But what would happen if we reveled in our anger instead? The books below are a roadmap to a better relationship with anger—to embracing it and keepings its fires blazing.

SCUM Manifesto by Valerie Solanas
Valerie Solanas was one of the first viciously, exhilaratingly angry feminist icons I identified with as a teen. Reading the SCUM Manifesto on the subway and in the park as a dirty punk kid was one of the first times I realized that this roiling fury that was always bubbling under my skin was part of something larger. I wasn’t just an angry kid—I was a woman, a feminist, and my anger was righteous. I found Solanas’s work at just the right time—when I was young and angry enough to take her goals of overthrowing the government and eliminating the male sex at face value and not be deflated by questions of feasibility or reasonableness. Solanas was diagnosed with paranoid schizophrenia after she tried to kill Andy Warhol, and established feminist thinkers have dismissed her ideas as too radical, but god damn if she didn’t have the fire and passion. Sister Outsider by Audre Lorde
This entire book of essays and speeches is required reading, but “The Uses of Anger” in particular is essential to the conversation about women’s anger. Originally a keynote address given to the National Women’s Studies Association in 1981, Lorde spoke about what we today refer to as “white feminism,” and took the mostly white audience to task for their insufficient response to racism—in society at large and in their own ranks. She spoke about a problem that’s all too relevant today: white women fighting for equality until they’re confronted with their own privilege, at which point they quickly pivot to victimhood. “I cannot hide my anger to spare you guilt, nor hurt feelings, nor answering anger; for to do so insults and trivializes all our efforts,” Lorde said. As we fight to make space for women’s anger, we have to contend with the fact that white women currently have much more latitude to express anger than women of color, especially Black women—and we have to fight for all women. Dead Blondes and Bad Mothers: Monstrosity, Patriarchy, and the Fear of Female Power by Sady Doyle
The latest book from the author of Trainwreck is delicious and fun—there are sections on slasher films, Jurassic Park, and The Exorcist—but it’s also absolutely infuriating. Taking the reader through the few roles women are culturally permitted to inhabit—virgins, wives, and mothers—Doyle illustrates with deadly precision and wry wit how we’re perceived and portrayed as monstrous if we dare step out of line. We’re so used to living within these constraints that sometimes we don’t even notice them, but Dead Blondes and Bad Mothers brings every limitation society puts on women into stark relief, and made me want to come up out of the sea like a deadly monster. The Bell Jar by Sylvia Plath
I know this is a classic Sad Girl book, but these days when I think about the Sad Girl archetype, I become a decidedly Mad Girl. I can’t read about women’s self-erasure anymore, the deep pits of pain we hold inside ourselves but hide behind pretty smiles, without getting furious. I can’t revisit Plath’s seminal, searing portrait of female depression and hopelessness without burning with rage for her and every other woman who has suffocated under the bell jar—without wanting to shatter it with a hammer. Goodbye, Sweet Girl: A Story of Domestic Violence and Survival by Kelly Sundberg
Domestic abuse is one of the most extreme examples of the ways women are conditioned to disbelieve our own perceptions and experiences—to twist our own minds to accept what’s done to us, to believe we’re at fault, that we deserve whatever harm comes to us, that we’re wrong to fight back. Kelly Sundberg’s harrowing and beautiful memoir about her abusive marriage—and the immense strength and fire she had to summon from deep within herself in order to break free—shows how easily any one of us could be convinced to give up our own perception of reality in favor of someone else’s, and how it truly is a matter of life or death that we hold onto what we know is true and trust our instincts when they tell us something is not right. Living a Feminist Life by Sarah Ahmed
No matter how much progress we may have made toward equality and the freedom to express our anger, there’s always the threat—sometimes stated and sometimes implied—that if we speak up too much, too loud, too often, we’ll be written off as a “feminist killjoy.” Sarah Ahmed embraces the title with gleeful, fuck-you abandon. She writes about the interplay between feminist theory and women’s everyday experiences, and offers a roadmap to live our convictions every day—and if men feel intimidated by our power and want to call us killjoys, they can go right ahead and cry about it. Indelible in the Hippocampus: Writings from the Me Too Movement edited by Shelly Oria
It’s amazing how quickly “me too” went from a visceral outpouring to a buzzword, and I’ll admit that the phrase started to lose meaning for me when people started throwing it around casually, labeling anything that had to do with women as part of the “me too era” and euphemizing any bad behavior as “a me too moment.” This collection of essays, short fiction, and poetry cut through the commodification and cynicism and reminded me that women collectively releasing the stories and pain they’ve been holding in for a lifetime is powerful as hell, and that’s what’s important about this movement. Telling our stories may not have changed everything overnight, but there’s no going back now that they’re out in the open. All we can do is continue to tell the truth, continue to bear witness for each other, and be fueled by our collective anger and conviction. The Fire Next Time by James Baldwin
This short and powerful book is comprised of two essays written by the groundbreaking author in the 1960s. The first essay, a letter to Baldwin’s fourteen-year-old nephew, is one of the most stunningly beautiful, achingly tender, and righteously rageful things that’s ever been written about anger. It’s a warning to his nephew about how Black men were treated in this country (and most of it still applies today, which makes it even more heartbreaking to read more than half a century after it was written). The letter makes space for the anger Baldwin knows his nephew will feel, and urges him to use that anger rather than letting it wear him down. 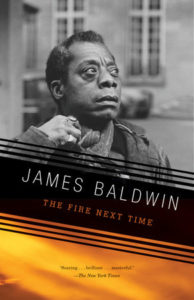 The Reckonings: Essays by Lacy M. Johnson
Bringing your anger up to the surface after pushing it down for so long is a powerful act. But once you’ve summoned your anger, let it heat you from the inside, reveled in its strength… what do you do with it? When you’re ready to burn it down, how do you decide where to set the first match? Lacy M. Johnson’s book of essays about justice, mercy, compassion, and revenge was a soothing balm for my raging soul. It reminded me that it’s not enough merely to seethe; we must also act. There’s a clear and palpable anger under the surface of these essays, but it’s been honed and refined into a chillingly sharp point, using the fire of anger to light a clear path toward justice. Rage Becomes Her: The Power of Women’s Anger by Soraya Chemaly, Good and Mad: The Revolutionary Power of Women’s Anger by Rebecca Traister, and Eloquent Rage: A Black Feminist Discovers Her Superpower by Brittney Cooper
Three brilliant books about women’s anger have come out in the last two years, written by three brilliant writers who explain with insight and wisdom exactly why this long-repressed rage is bubbling up at this precise moment—and how we might best harness it and ride the wave our collective fury to a better world. If you want to understand why you feel the way you do, and how to use that feeling as fuel rather than letting it burn you up, definitely set aside the time to do your homework with these three essential texts. Burn It Down: Women Writing about Anger edited by Lilly Dancyger
And to close out this list, I hope that if you’re seething with anger and ready to burn it all down, you’ll read my new anthology. Burn It Down includes essays from twenty-two spectacular writers about the ways they experience anger, and the role of anger in their lives. It’s an outpouring, a silence-breaking, a space to release the anger that we’ve been trained all our lives to shove down and ignore. While editing these pieces I was overwhelmed again and again by how much incredible power there is in women speaking honestly, owning the full breadth of our emotions, stepping into our full power, and saying we’re not going to sit quietly and take it anymore. Lilly Dancyger is contributing editor at Catapult and assistant editor at Barrelhouse Books; the editor of Burn It Down, an anthology of essays on women's anger; and the author of Negative Space, a reported and illustrated memoir selected by Carmen Maria Machado as a winner of the Santa Fe Writers Project literary award, forthcoming in May. More from this author →