Recently, my friend group kind of fell apart. I realized, though therapy and some soul searching, that the group was really unhealthy for me. One of the women had taken to “teasing me” about things like my appearance and my education. She was dismissive when I told her it was hurtful and asked her to stop. Another woman, who was also a mentor and my boss for a while, behaved similarly but with the added component of exploiting her powerful position over me to keep me from calling her on it. And a third didn’t do anything to me, but she always defended the other two even when they really crossed a line.

I tried different ways to assert my boundaries and make myself heard. But I wound up just checking out of the group when I realized I was unlikely to find the kind of friendship and support I am looking for there. I know it was the right choice for me, but it’s been really hard. I have other friends and a supportive partner, but the loss of this social circle has been difficult.

I get lonely a lot. I’ve developed a lot of social anxiety. I used to make friends relatively easily, but I’ve become more aloof and find it harder to invest in other people. I know part of me is still dealing with the pain of these friend breakups and I am afraid of exposing myself to the potential of it happening again. I know it’s also partly low self-esteem, which was really triggered by the behavior of these former friends.

I don’t think I’m looking for another girl group. I’m not sure that dynamic is right for me now. But I do really miss having a close girlfriends. I miss the bitch sessions and the girls’ nights and knowing I had someone to text when something funny or stupid happened.

Any thoughts on how I can reinvest in female friendships? I’m in my thirties and it feels like making friends at this age is particularly hard, especially among women because there is so much going on (marriage, kids, career, etc.). Everyone, including me, has less bandwidth for new friendships. Maybe that’s my real problem?

Can you help me?

I understand why some people hate Valentine’s Day, but I kind of love it. I love that there’s a day where we get to make a big deal out of love. The problem is we tend to let romantic love eclipse all else. But every form love is a big deal. If you step back to think about it for a minute, isn’t it miraculous that, through a process of social and biological evolution, we find ourselves in this particular moment where our relationships aren’t just essential to our survival but are often the most meaningful and pleasurable parts of our lives?

Like many, our species is biologically wired for socialization and attachment, but we also have this giant prefrontal cortex that makes it possible for us to assess those attachments and prioritize relationships that are legitimately good for us. This is an incredible asset, and I think we tend to take it for granted. I’m glad you’ve ditched this group of friends who made you feel small. I believe you when you say it’s been hard. Choosing yourself over group membership violates that basic human wiring. The loss of belonging, however imperfect those friendships were, is still a loss. It’s reasonable to grieve that loss.

Back in September I was on a hike with one of my favorite thirteen-year-olds. She was about to start a new school and was feeling nervous about making friends. The thing about being thirteen, she explained, is that, even though there are always people around to hang out with, you tend to drift into social groups without actively choosing them. You have friends, but you don’t always like them.

I thought of my own experiences in middle school and the immense pressure to belong—to wear the right clothes and be liked by the right people, to be thin and pretty and smart but never too thin or too pretty or too smart. I feel my chest tightening just thinking about it.

“One of the nice things about getting older,” I said, “is that, eventually, you get to pick your friends. All of them.”

I didn’t tell her that it took me until age thirty to really figure out how to do this. I didn’t mention the fact that finding new friends is much harder once you leave school and face the demands of adult life. Or that I still sometimes struggle to set boundaries. But it’s true that I eventually learned to clear my schedule only for people who make me feel great. And it’s awesome.

This thing that you’ve noticed—that women in their thirties and forties have a lot going on—it’s a well-documented phenomenon. A review of research on friendships found that mid-life is an especially tough time for connecting with friends thanks to all of the things you mentioned: working, parenting, caretaking. One study found that in mid-life most people only spend about ten percent of their time with friends.

It’s not all bad news. The important thing in all this research is this: it isn’t the number of friends you have that matters, it’s how satisfied you are with those relationships. Not only that, but researchers have documented that “negative friend events” (like, for example, being “teased” about how you look) are connected to higher daily negative affect. In other words: shitty friends make us miserable. Maybe this sounds obvious but now you can say that it’s documented by science. 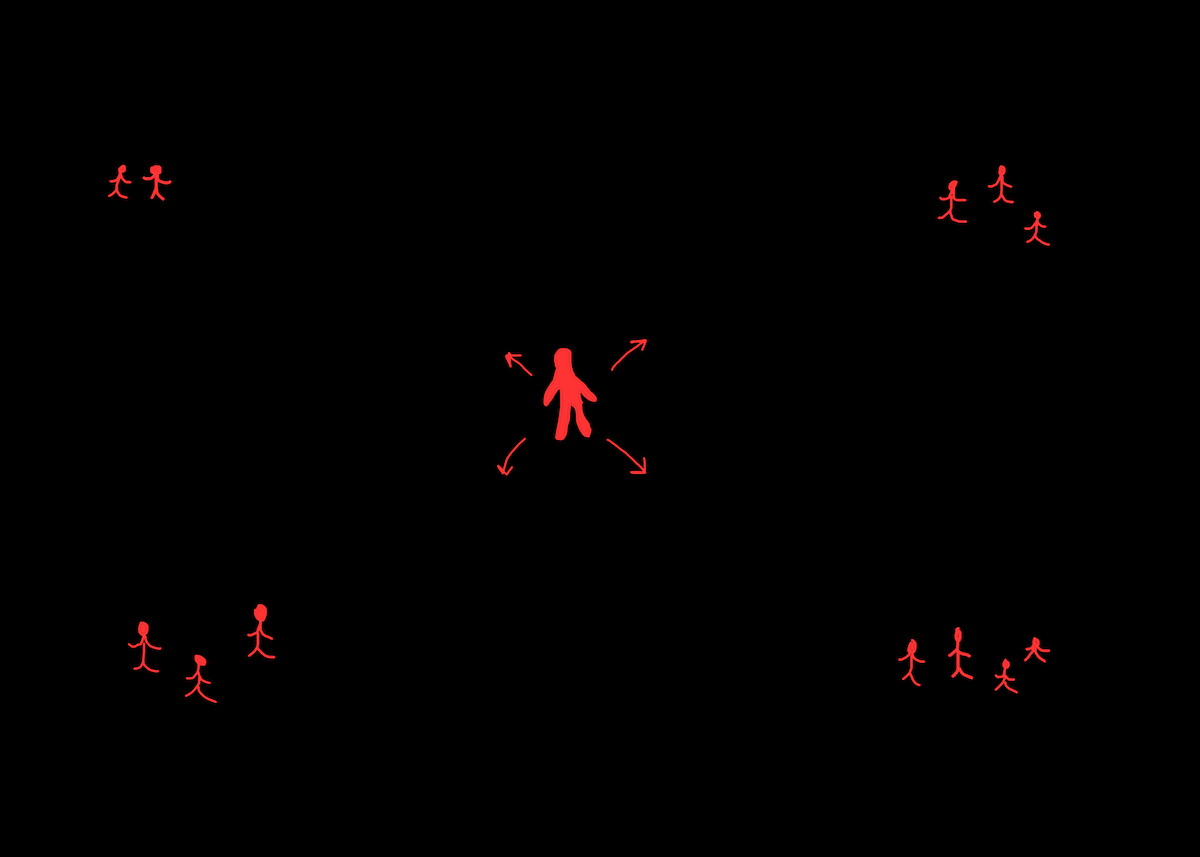 So, how do you actually find the friends worth keeping—the people that make you feel confident and happy and lucky they’re in your life? There’s one guy who’s really thought this through—like, all the way through. Jeffrey Hall is a professor of Communication Studies at the University of Kansas and he’s probably best known for predicting that it takes about ninety hours to make a friend. This particular finding got a lot of media coverage, but the important thing to understand is this: friendships take time, and there’s really no way around that. Aristotle was right when he called friendship “a slow ripening fruit.”

Hall really drilled down into the details of friendship, finding that it takes about fifty hours of time together to go from being acquaintances to casual friends, ninety to go from casual to more serious friends, and over two hundred hours to make a best friend. Of course these numbers are estimates averaged out across many individual experiences, but they point to something interesting. Most of us are willing to put in the effort to find a romantic partner or be a good parent or excel at work, but we rarely put that same kind of effort into making friends. Because we drift into friendships when we’re young, we tend to assume that friendship comes easily (and that, if doesn’t, maybe we’re to blame).

What if we started with a different assumption? What if we begin by agreeing that meaningful human connections won’t come easily—but that they’re really worth working for?

Hall and other researchers believe they are. A study of adults age fifty and over found that while the value of family relationships stays the same across our lives, the importance of friendship increases over time. In fact, it predicts health and happiness in old age. Hall puts it this way: “Maintaining close relationships is the most important work we do in our lives—most people on their deathbeds agree.” He considers spending time with friends a “strategic investment” in your own well-being.

Of course you can’t just walk up to someone on the street and follow them around for ninety hours and expect to become friends. (Trust me: I tried this once as a super-shy kid at summer camp and had my heart broken when the girls I thought I was finally connecting with let me know they’d rather spend the day alone.) But you can ask people to hang out. You can invite a work friend out for happy hour. Or, if that feels too intimidating, you can join a softball team or take a cooking class or sign up for regular dance lessons. The best thing you can do is put yourself in situations where you interact with the same people over and over.

It’s fine to start small. Tell someone you like something you like about them. It costs almost nothing and science has shown that it makes us happy. Then ask their name, and tell them yours.

I know, it sounds like a lesson from Being a Human 101, but, given that I’m often the person hovering by the cheese board hoping a stranger will come talk to me, this lesson still feels relevant. I try to remind myself that socializing is good for everyone. A 2014 study found that even introverts were happier on days they had more social interactions. These interactions add up to acquaintances. Over time, some of those acquaintances will become friends.

I met one of my best friends rock climbing on a Saturday afternoon. She seemed so smart and confident—and like a much better climber than me. A few weeks later, I needed a partner for the climbing gym and, even though I was terrified to ask her to hang out, the thought of not going climbing felt worse. I sent her an email. That was twelve years ago. We still climb, but we also eat Thanksgiving dinner together. I was at her house the day she gave birth. Every time I see her she compliments my outfit—even if it’s just sweatpants. And she really means it. It’s the best thing, and I couldn’t have imagined any of it the day we met.

The thing about real, long-lasting friendships is that they aren’t a luxury. They’re a fundamental necessity in our lives. There’s no shortcut to finding them. But it’s worth the effort. I promise.