In A Map Is Only One Story, the first published anthology of writing from Catapult magazine, writers reveal and explore the human side of immigration, an experience that crosses borders and generations. The writers in A Map Is Only One Story share an array of perspectives directly affected by immigration policy and how this country treats those who come here. While their stories are different, a truth they share is that immigration is not, ultimately, the story of laws or borders, but of people—of individuals, families, and communities.

To celebrate the release of A Map Is Only One Story, we’ve asked some of our contributors to recommend books one might read when searching for community.

Something I’ve been revisiting in relation to community-making is Audre Lorde’s Sister Outsider. Her essays speak to the ancient and hidden modes of being that are inside us and deeply potent, even as they are not legitimized by dominant (white) modes of being. How do we unearth and uplift these intuitive ways of knowing and feeling and doing in all aspects of our identity, including how we connect with and support one another as we move together though the world? 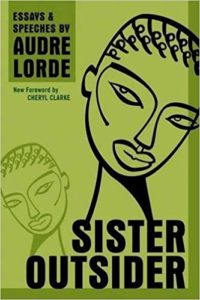 I’m recommending this book for its articulation of the African immigrant struggle to construct an ideal self whose blackness would not matter in America. Buchanan’s stunning, bell-like debut novel tells the braided story of a Japanese woman raised in 1960s New York alongside that of the mixed-race son she ultimately decides to abandon. This book offers space for those of us who aren’t perfect, who might have hurt people or been hurt in the past, to see understanding, growth, and redemption. It tells us that being in community doesn’t necessarily mean one has to be a saint; we can fail and try again, be jagged and salty, and still find our way back to each other. I got into writing through poetry, specifically via slams and open mic nights in New York City when I was in my early twenties. So whenever I need to ground myself, I flip through the BreakBeat Poets anthology. It reminds me that sometimes the most radical thing you can do as a writer is to sound like yourself. This essay collection is about the reciprocal relationship that’s possible between people and the natural world. I felt my mind and heart grow as I read these essays, and return to them often. All of the awkwardness and familiarity of the first- and second-generation Jamaican experience—that is almost absent from Canadian literature—is packed into this warm, charming, and timely anthology of short stories by Reid-Benta, set in Toronto’s rapidly gentrifying Little Jamaica neighborhood. A YA fiction book about finding and creating an activist community. I love it because it explores the complexity of grief, anger, and queerness, but settles into the joy and stability of having a supportive and loving community around you, who are willing to help you and push you to do what’s right. Indian and Pakistani writer Ahmed Ali published this book in 1940, but the story is set between 1911 and 1919. The story focuses on a Muslim family in Old Delhi, who are haunted by many things. Characters mourn unattainable love, the decline of the Muslim aristocracy, the end of Delhi as they know it. Disappointment permeates the novel. The Urdu translation of this novel made the title Dilli ki Sham, which is both Twilight in Delhi and Twilight of Delhi, which perfectly captures the mood of the story. Partition happened decades later to a vastly changed Delhi, but the sensation of lost glory, a suffering community swept away in a seismic tide of history, remains the same. The black communities in Morrison’s novels are messy. There are rivalries and betrayals. But there is also protection, strength, and love. In Pachinko, familial communities are tightly woven, but there still exists utter loneliness when their landscape shifts and changes in the aftermath of war and immigration. The characters and their predicaments are real, the places imprinted in my memory. I appreciate the communities I’ve fostered and those that welcomed me, because of the utter loneliness I’ve felt throughout my life. This is a collection of poems that explore what it might look like to have a home or belonging within yourself when no place, group, nationality, or identity may suffice, and the pain, grief, and triumph that may result. Even though the shocking backdrop of the book’s narrative is highly particular to a specific community (Mennonite women in a small South American village), the way in which the women cohere and find their individual voices and lines in the sand is remarkable and universal. Anyone who has ever felt traumatized and alone only to find power in shared experience will appreciate this novel, this “act of female imagination.” The book traces the legacy of intergenerational violence, war, and coming of age from the perspective of a queer Vietnamese-American boy living in the Midwest, “Little Dog.” Little Dog is writing a letter addressed to his mother in English, a language she cannot access, and much of the book looks at how points of access, intimate, familial, historical, and sexual, converge and turn away from each other. Vuong’s writing is full of stunning language and takes a fearless approach to structure, with a willingness to lean into the messiness of trauma. It felt exhilarating to watch a writer take risks and bend the narrative to make it his own.” This Bridge Called My Back: Writings by Radical Women of Color by Cherríe Moraga (author, editor), Gloria Anzaldúa (editor)
– Recommended by Bix Gabriel

The first book that truly made me feel I was seen in the way I wanted to be was This Bridge Called My Back: Writings by Radical Women of Color. When I first read it (sometime in the early 2000s), I found a sensibility, a world view, and a vocabulary that, until then, I’d only imagined. Here were the words of women of color—across race, and class, and orientation, and ability—defining in radical terms what that phrase—“woman of color”—meant to them. Though the term is rooted in identity, this book showed me that it was also a political statement, and an expression of solidarity, companionship, building community… while interrogating our multiple identities. The book didn’t just talk theory; it was a mix of poetry, art, essays, and more, reflecting the idea of intersectionality in the work itself. It’s quite an old book (originally published in the early 1980s) and might feel dated; for instance, it doesn’t question gender identity as we do today. But even in 2020, in this book’s pages I find myself. The Body Papers by Grace Talusan
– Recommended by Cinelle Barnes

Coming from a culture where trauma and its after-effects are never talked about, I consider Grace Talusan’s book a gift to the Filipino community. It offers us visibility, levity, and affirmation in the form of vocabulary. What is a people, but the words they speak and do not speak? And to close out this wonderful list, we’ve included A Map Is Only One Story, edited by Nicole Chung and Mensah Demary! – Ed.

A Map Is Only One Story edited by Nicole Chung and Mensah Demary
From rediscovering an ancestral village in China to experiencing the realities of American life as a Nigerian, the search for belonging crosses borders and generations. Selected from the archives of Catapult magazine, the essays in A Map Is Only One Story highlight the human side of immigration policies and polarized rhetoric, as twenty writers share provocative personal stories of existing between languages and cultures. Through the power of personal narratives, as told by both emerging and established writers, A Map Is Only One Story offers a new definition of home in the twenty-first century.