The series of bells became our song—the first meant I could go to him; the middle that I was almost there, a warning that if I didn’t hurry, I would get caught in the hallway and be given a detention slip; the third that I was safe inside his classroom, a ring of safety. He wrote me hall passes to forgive my late arrivals to my other classes, to excuse my absences, checking the box Excused from Class, filling in the blank Reason: Writing Extra Help. Or checking Admit to Class or Accept Excuse. It was all code from teacher to teacher. The date, the time, the room number: 11/11, A105, 11:27 a.m.

He would sign his name with a flourish on the passes, always in green ink, impressing me with his pen. Sometimes he would use nicknames for other teachers, “To: Josucks” instead of Mr. Josephs. Once I asked him why—my fingers around my thumbs as I looked from the clock face to his, the clock face again. My book bag was heavy. I was so late.

“Teachers are not always Mr. or Miss, y’know,” he said as he capped his green fountain pen, as if he were trying to teach me something. “They have their own names, too. They’re more than just your teacher.” I looked back at him as I left his classroom.

My other teachers must have noticed that I always had official excuses from Mr. North for being late or leaving class early, but no one looked beyond the pieces of paper. I wasn’t ever pressed with a question in the hallway that his signed pass couldn’t answer. 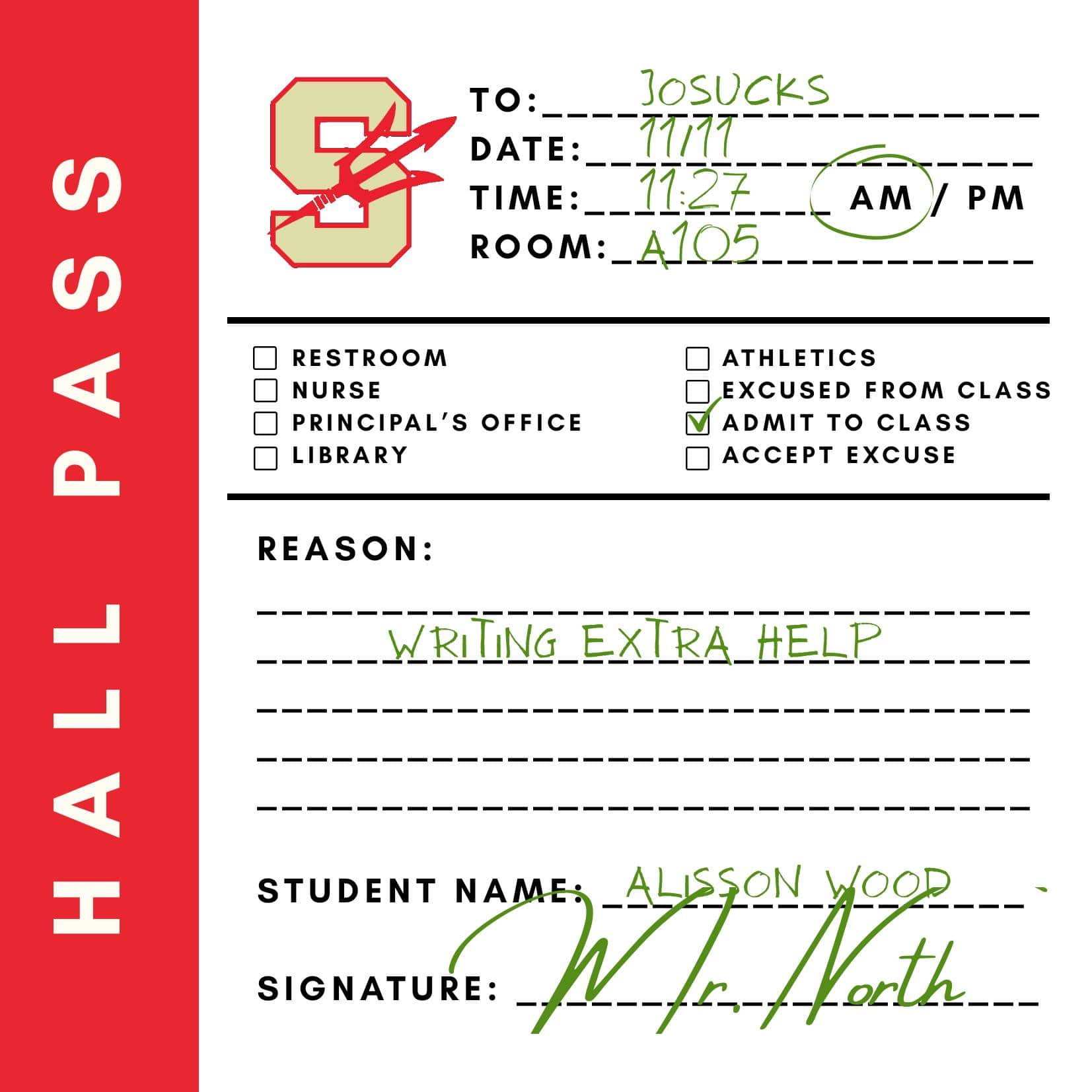 Once, I was sitting in his classroom, there was morning sunshine still from the windows but the floor was cold. November, no snow days yet. I was supposed to be somewhere else. Our usual arrangement in his rectangle room: him, teaching at the blackboard; his students, in rows of desks facing the board; me, sitting against the bookshelf on the back wall, between the wall and his desk, my books and papers spread out on the floor. None of the students ever questioned why there was a girl sitting back there. I’m not sure how often they even noticed—they’d have to stand up, turn around, and be at a certain angle from their seats to see me. But the teacher, when he looked at his students, could look right at me. It was a tenth-grade English class. They didn’t know my name; they didn’t care.

I was reading the book, the Nabokov, “the only convincing love story of our century,” said Vanity Fair on the cover. This was the teacher’s copy, with his notes, I had to take care. I didn’t realize until later that he had inscribed it to me, in green flourish:

To Alisson,
This book is lust, yearning, and occupational
hazards. And lightning.
Enjoy.
– N.N.

I moved along in the text, already to chapter 11, Humbert Humbert’s pocket diary of watching his nymphet. I didn’t know what the word meant the first time—something to do with a nymph, that mythical being? I asked Mr. North, and he told me to look in The Oxford English Dictionary. Actually, he said the OED, and when I got to the library to find it, they told me they had only Webster’s. I learned it was from the Greek and Latin (nympha) but was still a bit perplexed by its usage. Other than the mythical association, it suggested immature insects. Adolescent butterflies. I knew it was sexy, it couldn’t be more obvious from the surrounding language, but what was so sexy about a teenage creature? That stage between larva and adulthood, between a baby and grown-up. As someone currently in that stage, I thought it sucked. But whenever the teacher mentioned it, in passing, in reference to me, I just smiled back and played along.

Chapter 11 of Lolita was Humbert’s calendar of viewing his nymphet. Saturday… Glimpse of shiny skin between T-shirt and white gym shorts. Bending… A dorsal view, as Humbert called it, as Mr. North underlined. I thought this was referencing a sea creature at first, maybe a part of a dolphin? It wasn’t until I found the word again, old, reliable Webster’s, that I turned red. That day in November, I was watching his hands, chalk white on his fingers. I was waiting for him to write the number for later that night. He hadn’t written one yet. I looked at the clock—only a minute before the first bell, the beginning of the end of class. In the previous chapter of Lolita, I had underlined And there she is there, lost in the middle, gnawing a pencil, detested by teachers, all the boys’ eyes on her hair and neck, my Lolita. I felt like no one noticed that I was there, on the floor. Not the other kids, not the other teachers, not even Mr. North. I thought about his hands. I imagined taking one along my shirt, wiping the chalk off, I imagined kissing the top of his thumb where he had a callus from playing guitar. He told me he was writing a new song about a crush he had the other afternoon, I hoped it was about me. I imagined biting it, I imagined pressing my tongue against his thumb. I thought how he hadn’t written a number today and I had been sitting on the concrete floor for forty minutes now. I thought about what Lolita would do. Glimpse of shiny skin. I turned around. By then I had scooted over far enough behind his desk. In the slight shadow between it and the blue cinder-block wall, I knew that none of the students could see me. I didn’t look at the teacher anymore. I leaned over, deeply, into the book, now facing the windows, still on my knees, my back to him. I knew that as I delved into the pages he had given me, the upper edge of my black lace underwear, bought with my father’s credit card, would creep above the top of my low-rise jeans, that when Mr. North turned to address his students, I was all that he would see, a strip of skin.

Once, at night, at the diner, he wrote about my age, how wrong it all was, that we shouldn’t be together—girls who are only eighteen are in Playboy and we are told to look and then you—. He didn’t finish the thought, even on a paper place mat. But he showed it to me. I understood at that moment in his classroom on my knees how Lolita worked her magic on Humbert. This must be what power feels like.

The first bell rang. The ambient noise of chairs moving, backpacks closing, papers, books, pencils, all preparing to go. I heard his voice, the homework assignment repeated to no one in particular. I heard the other noises fade, his footsteps close, then stop. I arched my back and slowly sat up, tossed my long, dark hair. I twisted it around with my hand; the other still held my place in Nabokov. That glimpse of shiny skin. I felt like it had been quiet for hours in the waiting for him, for his words, not just on paper, not just chalk. I looked back toward him over my shoulder, he leaned down into me. This was the closest we had ever come. I felt the heat of his blood against my cheek.

“You are so sexy,” he said. I met his gaze. And the warning bell rang. Excerpted from Being Lolita, copyright © 2020 by Alisson Wood, with permission from Flatiron Books.

Alisson Wood is an award-winning writer whose essays have been published in the New York Times, Catapult, and Epiphany. She holds an MFA in fiction from New York University. Alisson teaches creative writing at her alma mater and at Sackett Street Writers' Workshop. She is the founder and editor-in-chief of Pigeon Pages, a New York City literary journal and reading series. Alisson was a winner of the inaugural Breakout 8 Award from the Author's Guild and Epiphany. Being Lolita is her first book. More from this author →