We are thrilled to bring you this exclusive first look at the cover of Michael Lowenthal’s new story collection, Sex with Strangers, forthcoming from University of Wisconsin Press on March 23, 2021.

Below, Michael Lowenthal shares his thoughts on Sex with Strangers’s cover. Then, University of Wisconsin Press art director Jennifer Conn offers us a glimpse at how the cover came to be.

Michael Lowenthal on the cover art for Sex with Strangers (University of Wisconsin Press, 3/23/21):

To the extent that I possess any flair for words, I have a matching deficit in visual intelligence, so I’ve typically kept my cover-design notions to myself. For my fifth book, though, I had an uncharacteristically clear idea. With a title as in-your-face as Sex with Strangers, I thought the cover image should tug in the opposite direction: suggestive, restrained, off-slant. But neither did I want it to be too coy: no bananas or Georgia O’Keefe flowers.

Right away, I thought of a photo series by Nico Segall Tobon, my boyfriend Bennett’s housemate in Pittsburgh. A few days before one of my visits (I live in Boston), she had invited a group of friends to their apartment and made black-and-white images of their naked legs and feet, intertwined. I’m the opposite of a foot-fetishist—if anything, I find feet comical in their humble clumsiness—but these photos were drenched in a subtle, honest sexuality. Some of the feet were shot against a shiny, scarred wood floor, others almost seemed to float in air.

The stories in Sex with Strangers do feature plenty of sex, but they’re less about the titillation than the tangle of desire—and in Nico’s pictures, the pairs of feet and legs were literally tangled. They were also gender-ambiguous—the models are all men, their feet and legs hairy, but some wear anklets, and some sport painted toenails—and this seemed right for a collection with equal numbers of queer and straight narratives, whose protagonists are female and male and trans. A more specifically gendered cover, I thought, would be misleading. The images sparked the same effect I hope my stories’ scenes of arousal will provoke: an irresistible disorientation.

I proposed a dozen or so of the photos to Jennifer Conn, the art director at the University of Wisconsin Press, and when she sent me the cover design, I was thrilled. Not only because she’d chosen one of my favorite shots—four entangled feet, two with painted toes, casting a combined, suggestive shadow—but also because the designer, despite my having said I favored an arty black-and-white, had washed the entire cover in blue. The shade is sexy—and broody, and witty—as visually multivalent as the very word blue, whose synonyms range from sad to smutty.

Best of all, unbeknownst to Jennifer or the designer, one of the pairs of feet pictured belongs to my boyfriend, Bennett—to whom the book is dedicated. It may be called Sex with Strangers, but every time I look at its cover, I see the man I love. 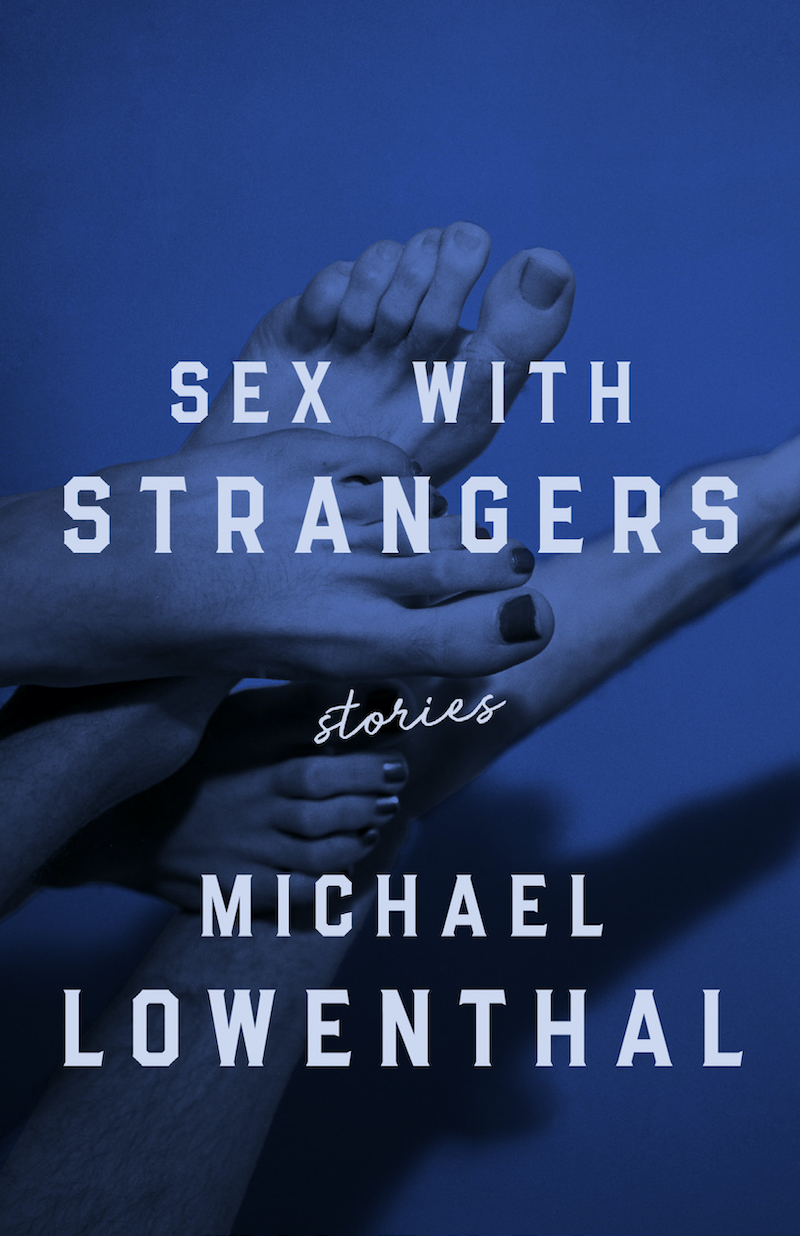 I was excited when Michael shared the folder of Nico’s photos; it felt like there were so many possibilities and each with the potential for a striking cover. We wanted the image to compliment the book’s alluring title while keeping us guessing about what we’d find inside. I narrowed the selection down to three photos, two close-ups and one of lower legs and feet from an unexpected angle. Collaborating with designer Jeremy John Parker, we discussed various directions and I asked him to experiment with color. We wanted to go for an image that would be impactful and memorable.

Jeremy designed five different versions, playing with various hues and type, some bolder and others more refined and understated. One design in contention featured a bright yellowy-orange color and a heavy sans serif, oriented vertically. It was an arresting design but lacked the subtlety the collection required. The direction we ultimately chose won out for its great balance of close-up intimacy and mystery. I love how the electric blue evokes a mood of nighttime excitement. The muted contrast of the photo allows it to recede a bit, keeping focus on the title. We discover what’s going on behind the words after taking a moment to explore the imagery.

I agree with Michael that the ambiguity of gender and identities of the feet add to the intrigue and compliment the varied stories inside. We hope the cover will entice curious readers to pick it up and meet the eclectic cast of characters within!