Gina Nutt is a remarkably sharp, creative mind. She’s the author of the essay collection Night Rooms (Two Dollar Radio), and has previously published the poetry collection Wilderness Champion, as well as two chapbooks, Here Is My Adventure I Call It Alone and Ars Herzogica (dancing girl press).

For this interview, Gina, who lives in Ithaca, New York, and I got together over Zoom, each of us joining the conversation from our home offices. Nutt’s decor was an eclectic mix that included a portrait of the Virgin Mary, a pink letter board with the text “I’m an Arby’s girl in an Arby’s world” spelled out, and a number of framed butterfly and moth specimens. We enjoyed discussing some of our favorite horror movies (the original versions of The Wicker Man and Suspiria came up), the dark presences that haunt us at night, and what it’s like to exist as a manifestation of the final girl. We also shared laughs about feisty internet connections, our cats, and the various animal skulls Nutt and her husband, writer David Nutt, have collected.

Night Rooms blurs scenes from Nutt’s own life with those from horror movies in a way that forces the reader to consider their own self and trajectory, and it has changed the way I consider the essay form. It was enchanting to talk with such a strong woman and hear about the way she approaches the craft of story, the genre of horror, and the essay form in fresh and inventive ways.

The Rumpus: I want to start with asking you where your obsession with life and death, and what you refer to as the “in-between,” began. I’m thinking of the first essay where you talk about finding a mouse and showing it to your mom, thinking it’s something really amazing, but you don’t realize it’s dead.

Gina Nutt: Once I started writing the first essay, the in-between focus became a big part of the tilt. This was shortly after my father-in-law had passed, and writing at that time really felt obliterating. I was stalling out particularly because my uncle had died by suicide fifteen months prior. So, I was dealing with the accumulation of losing people in my life to their own struggles, and then dealing with my own stuff. My experiences with death were all I was thinking about, so I decided to lean into those earliest encounters. I wrote about the mouse, and I wrote about this childhood monster.

Rumpus: Is this the Four-Day-Win?

Nutt: The Four-Day-Win— yes! While writing, I asked my parents if they remember much about this monster, or presence—we still aren’t sure what it was—but neither of them really know what happened. They only remember that I would suddenly wake up screaming in the middle of the night and when they ran into the room, I’d whisper “Shhhh, the Four-Day-Win.” It was this presence in the room that would horrify me in the dark.

But the in-between, for me that’s part of living with depression and moving through the world. Feeling in between the mind and the face, the filter I present.

Rumpus: Like you’re torn between what you let the world see and what you’re trying to suppress, that darkest narrative happening in your head that doesn’t even feel like it’s you. I don’t know if I’d call it a liminal space.

Nutt: I think liminal space makes sense. One way I describe it is like being underwater, like you’re there but you’re not—it’s this immersive feeling. 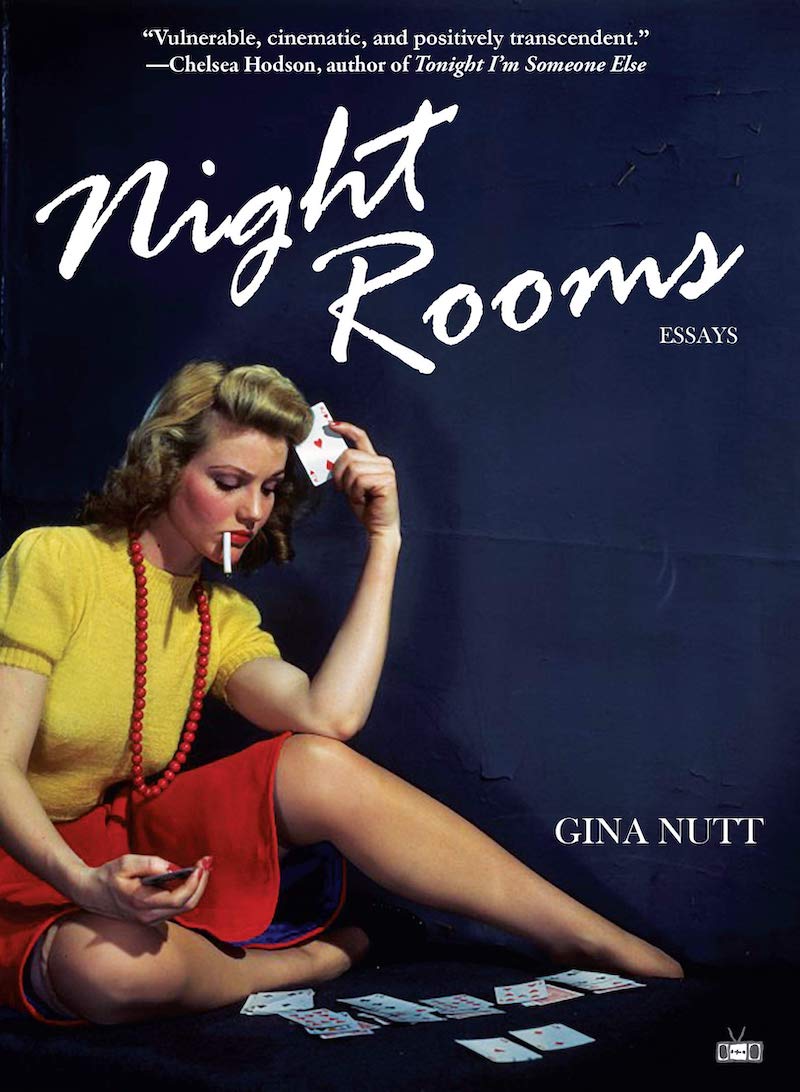 Rumpus: You talk about water in the book a lot, how part of the horror of water is that there’s so much unknown. I’m thinking of the terror of what’s unknown and also about what you choose to reveal and what you leave in the dark when you’re talking about things that have happened to you. You write about traumatic experiences without baring all, and there’s something almost soothing about that approach.

Nutt: It offers a soft landing. Initially, I found early drafts were too coy and I was trying to write my way around things. I ended up writing through specific experiences in full detail, then dialing things back. It became a matter of cutting things out and putting others back in, expansion and compression. Sometimes I might leave the last two sentences of a paragraph, rather than cutting the whole thing. In that way, the ghost of what was there remains. I thought in some cases, Maybe that’s all I need. While editing, I found it helpful to think in terms of sentences and image and language, to think about the experiences as a writer, instead of the person who lived them.

Rumpus: I’m wondering how it feels, though, to have parts of yourself, and therefore parts of your great uncle and your father-in-law and these different people you write about, sort of immortalized between the covers of Night Rooms. What that feels like, especially because the book itself is so much like the museums and collections you write about, like the collection you have of framed butterflies and insects.

Nutt: They’re above my writing desk. I have specimens, like framed moths and butterflies. I have a skull here and there’s part of a skull higher up on a shelf there. [Points above desk]

In terms of the book, I feel a sense of honoring people who aren’t here anymore. Early on, I shared a draft with my husband because I write about us, I write about his dad. He’s also a writer, so I could trust him to honestly say if something felt wrong, if something sounded gawking or unseemly. I also wanted to know that I wasn’t embarrassing myself.

It’s freeing for me to be able to lay a lot of painful things to rest in my writing. It’s meaningful to me to honor these less apparent parts of myself, too. When I think of immortalizing a self in writing, I try to bring a generous mind. I don’t look at my first poetry collection and say, “Oh, those are awful.” I find it sad when writers dismiss their earlier work and can’t say, “That’s what I wrote at the time; I’m proud of it for what it is.” As writers and artists, it’s important for us to stand by the work we did, even if it’s some version of ourselves that we’re really far from now, or if we have new feelings about the same subjects.

Rumpus: I have to ask—are you working on anything else now? Do you have any projects in mind or are you just writing and seeing where it takes you?

Nutt: I’m working on some fiction but I work so slowly now, it will take me a while to feel my way through. One of my favorite parts, though, is when I don’t know what a piece is going to be and it exists in this dream space. I know eventually writers have to make decisions, commit to structure and narrative and all the things that will entice a reader to stick with them for a book’s duration. That usually happens for me in revision, though.

Rumpus: Well, there are no rules if you can’t yet define what you’re creating.

Nutt: Yes! I like marinating in uncertainty for as long as possible. It’s also nice to nurture the creative side while promoting the essay collection. I joke that “it keeps me honest,” but there are so many flickers of truth in that. It’s important to me to stay dialed in to my writing.

Rumpus: One thing that I noticed really early on with your book is how you talk about these really hard things and there are some things that feel very ethereal, but you don’t treat topics especially delicately like I’ve seen in a lot of other works. I’m wondering if you thought about that much while writing.

Nutt: I thought about it more in revision. The earliest drafts withheld too much, but later drafts felt too revealing.

George Saunders said in a talk on the short story, something to the effect of: “When you pay attention to those sentences, your better nature rises up.” I love that because it acknowledges the emotional tug and currents that underlie the choices we make as writers.

Working on these essays, I came back to that advice. I became more willing to lean into the sentences, and also to think of vulnerability as an aspect of craft. I found that writing better sentences pushed me to write the better essay, while also coming away perhaps somewhat transformed.

Rumpus: In this collection, you spun yourself into each essay alongside characters from different horror movies. Writing yourself into these essays, as opposed to poems, did you ever feel like your past selves were characters separate from you, the writer?

Nutt: I wasn’t thinking in character terms exactly, but I thought about the speaker of the essays, in the same way I think of a speaker in a poem. I think of the speaker as the curated human who is articulating an experience to me.

I also thought about the final girl figure in horror films, the one who survives until the end of the movie and lives to tell the story. She’s a character, an archetype. In Night Rooms, I was juggling my position as the speaker of these essays alongside my meditation on “the final girl,” and in some ways I emerged as a possible manifestation of the final girl, by default of sharing these experiences.

Rumpus: Has your idea of the final girl, as you being an incarnation of her, changed at all since publishing the book?

Nutt: My sense of the final girl changed throughout the writing and the revising, and that feels cool. It’s strange in some ways because initially I was following the premise of weaving horror films and personal experience. What began as a project became something else. Writing into this trope, this archetype, was a way to let the writing outlive my earliest idea, or expectation, of what it could be. Now, getting to share it, it’s another “final” realization of the final girl.

Katya Buresh is a writer living in Maryland, where she is in her final semester studying music and English at Towson University. She is senior editor and poetry editor of Grub Street Literary Magazine, as well as an intern with Baltimore’s Mason Jar Press. Her work can be found in Ligeia Magazine, Metonym Journal, and other publications. Find her on social media at @katyanburesh and at sincerelykatya.com. More from this author →