Nothing in the sky but sun on 380 West, just outside of Tatum, New Mexico. It’s July. 1997. The day before the fiftieth anniversary of the Roswell Incident. We’re all in our late twenties, and two of us push a broken-down Jeep off the road and into the lot of a Phillips 66, while the other struggles the steering wheel. We wear bikini tops under our t-shirts, khaki shorts with pockets, flip-flops. After we maneuver the Jeep to a parking spot, one of us lights a cigarette, tossing her head back to let out a heavy sigh of smoke. We find a payphone on the side of the station and punch silver buttons, ask for information. We jot a number for a towing company in Lubbock on an old receipt, then strain to hear what the man tells us against the roar of passing cars.

It’s hot and dry, and across the road, desert grasslands spread the distance, dotted by sagebrush. We lay out our beach towels on the concrete next to the Jeep and shrug out of our t-shirts. Trade a bottle of sunscreen back and forth, soak in the surprise of our stranded adventure. After a while, we put our t-shirts back on and step into the station, slide our sunglasses on our heads and squint at the shadows. The gruff clerk in a Dallas Cowboys hat cranes his neck toward the scene outside: “What the hell y’all doing out there?” We set fountain drinks and Sun Chips, peanut M&Ms, and Blow Pops on the counter for a picnic in the parking lot. We’ve been going to Bottomless Lakes—a state park thirteen miles east of Roswell—for years, usually in the spring as soon as it’s warm enough, or when one of us calls to declare, “Emergency.” A sudden need to get out of town. We revel in the way we can pick up and leave, take off for a weekend. We sleep on the ground. We drink too much. We pull our sleeping bags over our heads against the sun that crests the ridge before we’re ready. And when we are, we dive into the lake. All the RVs out of the park hours ago, headed toward their next landmark, so we toss our bikinis onto the beach and float on our backs, glad to be a world away.

We made it almost one hundred miles of our two-and-a-half-hour trip west. Blasting the mixtape, singing about a Witchy Woman and shouting to each other over the plastic windows battling the wind. Now we’re lounging on beach towels in a gas station parking lot, propping ourselves on our elbows with our legs stretched out as if we’re poolside at some motel. Strangers come and go, gas up, squeegee windshields, carry a bathroom key attached to a license plate, drop fast food bags into the trash. We are not bothered by their stares. Out here, no one knows who we are. We do not know to worry that no one knows where we are. Waiting for a tow, waiting for our lives, not knowing we’re already living them. For years we’ve been making choices as if they’re new chip flavors. Sure, we’ll try that.

The case of beer we picked up at the Allsup’s a few miles back chills in a cooler on the back seat. When the tow guy arrives, he’s about our age. Good-looking. Something we agree on by exchanged glances. He swaggers toward us until we can see the name patch on his work shirt —Josh. While he loads the Jeep onto the flatbed, we climb up into the cab of the truck. All of us squeeze together on the single seat, and one of us sits next to him, pressing against the warmth of his work shirt and jeans. We all talk easily for the hour back to Lubbock.

After we shuffle around in the garage lot, watching the Jeep slide backward down the flatbed, he offers to take us to the car rental place, so we grab our camping gear and cooler, the mixtape. Hand him one of our Tecates, now ice cold. He asks the girl who sat next to him for her number, and in the days after we get back, she won’t pick up the four times he calls. She’ll stand in her kitchen listening to his soft voice on the machine, feeling bad that her road-girl impulses dissolve like the waves on asphalt once she’s back home.

We step into the relief of the air-conditioned rental office, ask if we can have the Town Car in the lot, the one as big as a spaceship. We set our gear in the trunk and open the heavy doors, swing back onto the highway, and head south. One of us asks if we noticed the way the tow guy propped his wrist on the steering wheel while he drove. When we return to the two-lane in New Mexico, the road climbs and falls like a distant light blinking before fading and lighting up again. Every few miles, we pass hand-painted messages on sheets tied to the barbed-wire fences lining the road. The signs flutter in the wind: Welcome Aliens! They’re Here! Beam Me Up!. We pull over at one to climb the rocky slope and snap pictures of each other, take turns raising our arms high or pointing to the sign. 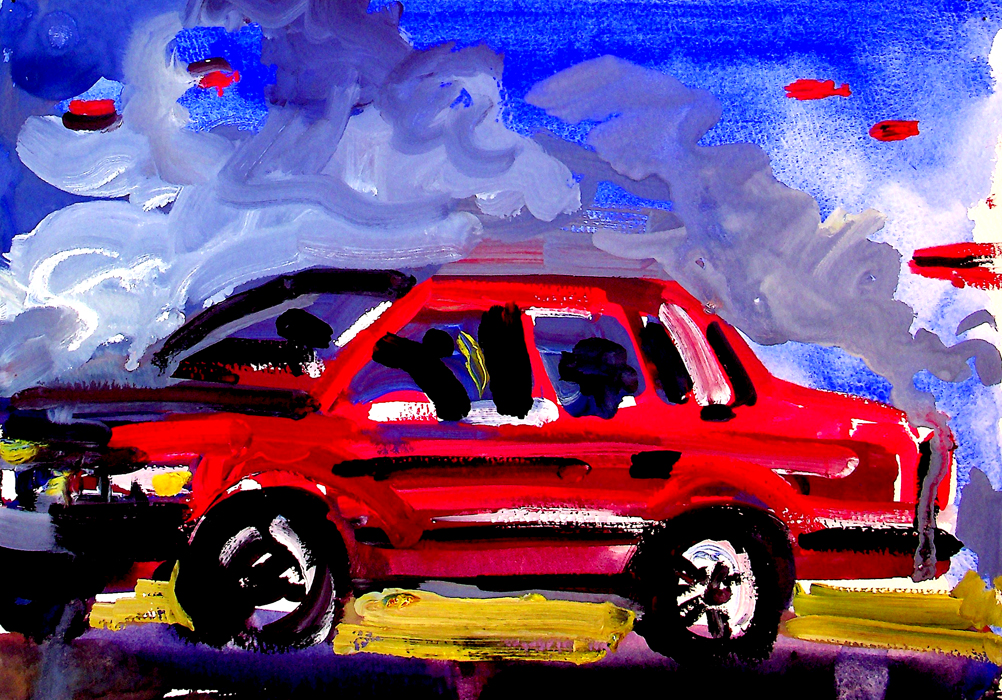 Deeper into New Mexico, the Town Car floats in a stream of RVs and trucks, cars with some version of UFO or Bust shoe-polished on back windows. We’re all headed to some distant-from-the lights-of-town place to watch tomorrow night’s sky. Some will set up telescopes, shoulder zoom-lens cameras.

We pull into the entrance of Bottomless Lakes, pay our camping fee, and guide the Town Car—an unlikely site out here—along the dirt road to our favorite spot near the park’s largest lake. The lakes, actually cenotes, range from seventeen to ninety feet deep, their blue-green water appearing endless. Like the afternoon.

At the lake, two of us go for a hike. The other likes her time alone, so she reads on the beach and jots words into a journal she’ll keep in a box with all the others from these years. Each time she moves, she’ll set the taped box in a closet or storage.

Later, after securing the tent against a gritty wind, we’ll skip stones at dusk while bats scatter from caves, invading the sky. Even later, we’ll sit at a picnic table and drink one Tecate after another before swigging from the tequila bottle we picked up at Allsup’s. We’ll say the kinds of things people say in the years before they even begin to think about looking back.

And we’ll shout and laugh in the dark as we tipsily climb a ridge overlooking the lake, wanting nothing but stars and empty wind. Steadying ourselves at the top, we’ll turn toward the lights of Roswell in the distance, not knowing there are years ahead when we will disbelieve our lives.

Jill Talbot is the author of The Way We Weren’t: A Memoir (Soft Skull, 2015) and Loaded: Women and Addiction (Seal Press, 2007). She’s also the editor of Metawritings: Toward a Theory of Nonfiction (Iowa, 2012). Her writing has been named Notable in Best American Essays four times and has appeared in journals such as AGNI, Brevity, Colorado Review, Gulf Coast, Hotel Amerika, Longreads, LitMag, and the Paris Review Daily. She is Associate Professor of Creative Writing at the University of North Texas. More from this author →