All too often, it gets hurled at strong women like a boulder of hate tied up with a big red misogynistic bow. 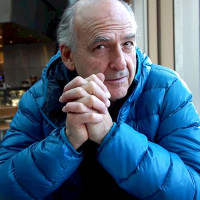 Author and translator Jay Rubin talks about his new novel, The Sun Gods, translating Haruki Murakami into English, and the internment of Japanese citizens during World War II.

Haruki Murakami’s book trailer for his forthcoming 1Q84 is intergalactic. See below:

Haruki Murakami discusses “Town of Cats,” an excerpt of his impending publication, 1Q84 (to be released in October) with the New Yorker’s fiction editor. More reason to get excited for fall’s literary bounty! “Whenever I write a novel, I have a strong sense that I am doing something I was unable to do before. With […]

Oh look, it’s the first few lines of Haruki Murakami’s impending publication, 1Q84. The book was a major hit when it came out in Japan around two years ago. Alas, it is soon-to-be-released here and in the UK. It’s three volumes, translated in part by Jay Rubin and Philip Gabriel. Here are the opening lines […]