“I’m sure someone out there has a workable solution. But what do I know? I make comic books and write about jazz. I do know the difference between right and wrong, though.” As the second anniversary of Harvey Pekar’s death approaches, Guernica shares an excerpt from his posthumous graphic novel, Not the Israel My Parents […] 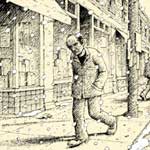 Harvey Pekar’s Cleveland, co-published by Zip Comics and Top Shelf, is the first book of new material to come out since Pekar’s recent death.

View Rumpus artist Lucas Adams‘ tribute to Harvey Pekar, inspired by this comic, after the jump:

Harvey Pekar, the only famous comic-book creator who isn’t an artist himself, last month released a graphic adaptation of Studs Terkel’s Working with The New Press. Dave Gilson summarizes it on Mother Jones as not “the most far-fetched attempt to repackage” the classic 1974 collection of interviews with blue-collar workers — “that would be the […]