Darren Aronofsky’s fourth feature film, is the story of a wrestler, Randy “The Ram” Robinson, 25 years past his prime. While at the height of his glory The Ram reigned as champion of the professional wrestling world. But now older, battered and physically exhausted, instead of filling arenas he performs in sparsely attended matches at high schools and community centers. He holds odd jobs on the side, barely making ends meet and living in a trailer in a blue collar suburb. The drab New Jersey backdrop provides the perfect compliment to the story: difficult, bleak at times, understated and, most importantly, sincere . The streets and the trailer parks evoke a distinct sense of the everyday, of the American working-class experience. Rourke imbues his portrayal of Randy, a fundamentally good man engaging in relatable struggles, with humanity and honesty.

The Wrestler is a film as graceful and delicate as it is brutal. While we are invited into a world characterized by its own artificiality (the wrestlers, nearly all of whom just as over-the-hill as Randy, convene before each match to orchestrate it), the film itself paints a heartbreakingly realistic and true portrait of a man, down on his luck, trying to make sense of his life through the sum of its parts. Despite the meticulousness of the theatrics—glittery tights, ridiculous stage names, hair dye and steroids—The Ram ultimately turns back into Randy, whose real name is actually Robin (a name he repeatedly begs not to be called in public), bearing a body pushed past its limit, covered in stitches and scars, a heart condition and a damaged ear drum, forcing him to wear a hearing aid.

The outrageousness of professional wrestling helps to highlight the depth of Randy’s character: one so vulnerable to the real world that he immerses himself in an all-encompassing, and completely absurd, fake one. It’s easy to understand why Randy was at the top of the wrestling profession, his unflinching dedication to each performance, as well as his willingness to mentor newbie wrestlers, dolling out advice before matches and congratulations afterwards, is a testament to his sincerity. But time has caught up with him, and the profession is unforgiving. Though The Ram is just a character, an enormous, hulking figure with a mane of artificially blond hair, the man underneath the costume is very much flesh and blood.

Like his character, Rourke has been dealt some serious blows throughout his career. He left the acting world 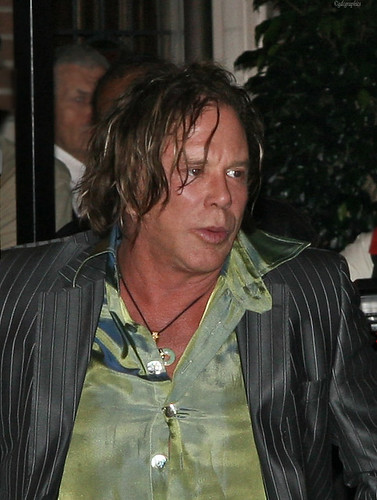 to pursue a short-lived career as a professional boxer. While Rourke was, to some extent, the architect of his own downfall, he embodies Randy with wisdom, lending not only his raw, surgery-ravaged face and broad body to his character, but also his own experience and sensibility, making his performance believable. In addition, Marisa Tomei, who plays the role of Cassidy, a stripper with whom Randy cultivates a relationship, delivers a fantastic performance in her portrayal of an equally damaged individual. Like The Ram, Cassidy (also a stage name), is a performer, making her living pretending to be someone else. And, like The Ram, as she gets older the circumstances of her real life and those of her career become more and more at odds. Though she is mostly naked throughout the entire film, Cassidy is overtly guarded and contemplative, careful never to reveal too much of herself despite her inherently public profession. Both live double lives: One in front of a crowd, another behind closed doors, and it is this mutual understanding that allows the two to form such a strong and believable bond (though the extent of their romance can, at times, feel like a bit of a stretch).

Aronofsky doesn’t shy away from the graphic nature of both the strip club and the wrestling matches that punctuate The Wrestler (there is one in particular, involving a host of props including barbed wire, a ladder and a staple gun), he does so with grace and purpose. In Requiem for a Dream, for which he became instantly famous, Aronofsky confronted the grittiness and devastation of unshakable addiction. He decision to include scenes and images so gruesome that the film was originally released into theaters without a rating wasn’t for shock value. In the context of the film as a whole, each is crucial in expressing just how poisonous the promise of the American Dream can be. In The Wrestler, the bloodier bits, never gratuitous for their own sake, are equally important. Blood is shed and pain is inflicted during each and every performance, but it is planned pain, carefully mapped out for maximum effect as competitors agree on the terms of the fight before either leaves the locker room. Though the blood is real, and ultimately takes a serious toll, the ring provides Randy with a controlled environment in which to manage, and hold ownership over, his pain, which is why despite his failing health he continues to play the game. Throughout the course of the film he toys with the idea of retirement only to ultimately wind up, once again, with his back against the ropes. Even the consistency of choreographed violence is, to Randy, a fine alternative to the volatility of real life, especially if it means that he, as The Ram, gets to come out on top. As it turns out, The Ram always wins, though Randy is seldom so lucky. Out of character, he drifts through the frozen New Jersey streets, attempting to repair his relationship with his long-estranged daughter, played by Evan Rachel Wood, and to mend his broken body so he can continue to wrestle.

Previously, Aronofsky has used extremely fast cutting and shaky cameras to force a sense of panic on the viewer. Here Aronofsky captures the gruesome, theatrical details of the wrestling matches, but also makes use of the film’s quieter moments, filling silences and pauses between sentences with Randy’s strained breath and heavy, uncomfortable wheeze. The violence is expected, it’s the subtler blows that linger: the scars not from wrestling but from heart surgery, the unfolding of a childhood photograph of his daughter who has grown up, the thumb wound he acquires working at a grocery store, the sparse attendance at a convention where a host of has-been wrestlers man tables covered with their own memorabilia, each older and more physically damaged than the next.

But it would be a mistake to suggest, though definitely grim at times, that the film is wholly bleak or sentimental. Its tenderness is punctuated by humor. While making light when appropriate, the funny parts are never meant to cheapen Randy’s experiences, and instead humanize him further, making the film even more effective as a sort of meditation on a lonely and confused, fundamentally kind-hearted man trying his best to manage the blows.