An Interview with Michelle Richmond

There are hot writers in MFA writing programs, writers whose names are on everyone’s lips. I’m sure that students and professors at Cornell’s MFA program can’t stop talking about their wunderkind alum, Junot Diaz; at BU, it’s Jhumpa Lahiri; Michael Chabon at University of California at Irvine, to name three.

It was my first year at the University of Miami’s MFA program and the hot name that year was Michelle Richmond. Lester Goran, the patriarch of UM’s program and the only professor who was teaching there ten years earlier, when Richmond was a student, came in with good news. “A past student of mine just sold the movie rights for her book, The Year of Fog, to Newmarket films,” he said, beaming like a proud parent.

I waited for the “I taught her everything she knows” but it didn’t come. Instead Goran said, “She graduated from here, you know.” We asked him about Richmond. He didn’t go into details, but from his mumblings, we gathered that she was a bit of a pistol. A take-no-shit-from-the-workshop sort of student.

“I bet I was an obnoxious graduate student,” Richmond admits during our phone interview. She remembers fondly one workshop in which her short story was accused of having too much sex in it, an accusation she adamantly dismissed. Now, her voice is kind but perky. There is no pretension—she seems as excited to talk to me as I am to her.

“It’s funny the different roads life will take you down,” Richmond says, when I ask how she chose the University of Miami. She acknowledges that had her life taken a few different turns, she would not be where she is today (geographically, professionally, metaphorically.) She seems to have a “go where the wind takes me” attitude.

The wind didn’t take her far from her Southern roots. Born and raised in Alabama, Richmond attended the University of Alabama. She studied creative writing, and knew about the possibility of getting an MFA, but decided to dip into the great American job force first. She worked at a tanning salon, where her job was to wipe the sweat from the tanning beds and let people know when their time was up.

“Details are not my strong suit,” she says. “I left a lot of people in the tanning bed for way too long.”

Richmond then hosted a cable television talk show called Buckhead Weekly, for which she conducted many interviews in ill-advised sequined evening gowns. The job ended when she got into a car accident on her way to an important interview with a famous landscaper. “The damage wasn’t bad, but the guy who bumped into me was a revelation. I ditched the interview and found myself, several hours later, in a rowboat in Macon, Georgia with the Car Crash man.”

What did she learn from sweaty tanning beds, sequins, and orgies? “I knew I wanted to arrange my life so I could write.” She enrolled in the MFA program at the University of Arkansas, where she met her future husband, Kevin. A few years earlier, Kevin had applied to the FBI, and one semester into the program, the agency came calling. He moved to New York City for training, and Richmond decided to relocate to Miami, where she could write with an ocean view. “I lived in North Beach,” she says. “I would sometimes walk the beach and swim in the ocean all day.”

The beach is the crucial location of Richmond’s second novel, The Year of Fog – though in this case it is Ocean Beach, in San Francisco, where she and Kevin now live. It was The Year of Fog that landed her on the New York Times and San Francisco Chronicle bestsellers lists, and that landed her the movie option about which my professor was so elated.

The Year of Fog chronicles a year in the life of Abby Mason, who, after taking her fiancé’s daughter to the Beach, loses her in the fog. Abby struggles with guilt and grief, ransacking her memory for clues in the search for Emma.

Richmond’s son, Oscar, was born soon after she finished writing The Year of Fog, but before she had sold it (to Bantam) and begun editing. “It was terrifying and very emotionally draining. The book would not have been written had I already been a parent.” After The Year of Fog, she worked on a novel about a woman who commits infanticide. But she couldn’t finish it. “My editor said, ‘Why don’t you try something new?’ It was such a relief.”

Parent or not, the subject matter of The Year of Fog is shattering. But the writing, as deft as it is heartfelt, pulled me along to read to the very last page. I admitted to Richmond that I was tempted to read that last page before I was even halfway through. “I visited a few book clubs and people told me they read the last page at the beginning,” she says. “It doesn’t bother me. I’m grateful to anyone who will read the book. In fact, it kind of makes me happy that they are so moved by the book, they have to know how it will all end up in order to keep reading.”

In addition to keeping up with book clubs, Richmond has a website, which offers a blog, an interactive Year of Fog map, and an online chat option. She gets emails daily regarding her books, most often in praise. Though one fan did have trouble distinguishing author from protagonist, and wrote to Richmond as if she were Abby, the main character in The Year of Fog, giving her advice on how she should have handled her relationship with Jake, the fiancé in the book.

Some emailers are parents of missing children. “I find it astonishing that there are people who would be able to read this book, having gone through [that experience],” she says. Richmond has done a lot of research on missing person cases and recognizes some of the names of the people who email. There is a point in the book where one of Emma’s parents gives up the search and decides to have a memorial service. Some readers emailed Richmond and complained about this decision. But one woman whose case Richmond knew wrote to her and said that she understood the decision and that she had experienced those exact emotions.

Motherhood hasn’t held up Richmond’s writing career, though. After ditching the infanticide book, she began writing No One You Know, which recounts Ellie Enderlin’s attempts to unravel the mysteries of her sister’s death. The critically acclaimed novel takes readers to the villages and coffee plantations of Nicaragua, where Ellie confronts a past she didn’t know her sister had.

When Oscar was a few months old, Richmond relied on babysitters to give her a few precious hours a week to get her writing done. But if she stayed in the house, the baby wanted to be with her. Instead, she drove to the beach and wrote in her Jeep. Or she took Oscar to the library. It was at the library that she received an unexpected call from her agent.

“I have a fear of answering my cell. And my agent is wonderful about it. She’ll usually just write me an email saying, ‘Lithuania wants the rights. Here’s the deal. Shall we proceed?’ And I’ll answer ‘Yes.’ She rarely calls. So when I saw her number come up on my phone, I knew it had to be important.” 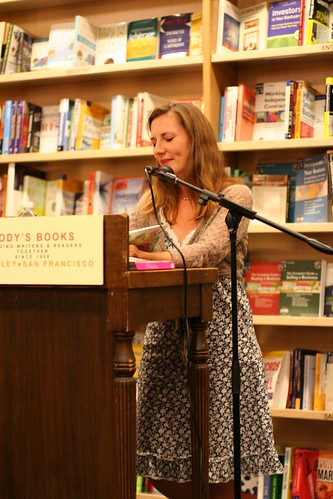 The rights to The Year of Fog had been optioned to Newmarket Films. A fan of Newmarket’s work, in particular Memento and Donnie Darko, Richmond was thrilled. “I really got lucky. They are moving fast on it. They already have a producer, director and a screenplay. I know that a lot of books are optioned and few actually get made into movies. But, fingers-crossed.”

When our conversation ends, I do what I do with people I immediately like—I start to calculate the similarities between us: we both went/are going to the Miami MFA program; we both are library-goers; we are both women; we both have a fear of the phone; we both write stories that workshops think have too much sex.

It’s okay, I silently tell myself. Maybe, with a lot of hard work, I can have that sort of success. And then that voice creeps in and says, Are you crazy? But I remember that Richmond once sat where I sit: Ashe Hall, room 427. She once had Lester Goran as a professor. And she also once had no idea what came next.

“Good. You shouldn’t,” she tells me. And her tone is so reassuring, I believe her.

Margaret Cardillo is a second year Michener Fellow at the University of Miami and a former editor at Hyperion Books. Her children's book, a biography of Audrey Hepburn, will be published by HarperCollins in 2010. More from this author →