Rumpus blogger Rick Moody posted a comment to my recent post about Lord of the Rings asking whether the special effects of that film still held up. I got to thinking about why we accept some special effects as cool even when we can tell they’re fake while we turn up our noses at other special effects. On one end of the spectrum are the effects Wes Anderson used in The Life Aquatic with Steve Zissou, including fakey animated shots of sea life and a cross-section of the ship The Belafonte right out of a theater production design master class. On the other end of the spectrum we have the straight-to-DVD science fiction movies of bargain bins and pretty much anything related to science fiction that BBC has ever been involved in. Dr. Who, I’m talking about you.

George Melies’s Voyage to the Moon

Why do we laugh at some special effects because they are so blatantly fraudulent, yet delight at the same level of effects when employed in a different context? Why is it that Tarantino can have a model airplane fly over a model of Tokyo and this is accepted as evidence of his mastery over the medium, while a similar model plane flying over Tokyo in a C-grade Japanese monster movie elicits snorts?

I think it boils down to three interconnected questions. One, how comfortable is the film’s creator with the fundamental falseness of the medium? Two, how much is the creator trying to “fool” the audience into thinking what they’re seeing is real? Three, how strong is the story?

The effects-driven films we tend to think of as shitty are those, I think, that either try too hard to trick us into thinking what we’re watching is real at the expense of storytelling. Filmmakers who pay inordinate attention to whether the fur on their CGI gorilla looks like “real” fur while putting this gorilla in a lame story bring attention to the falseness of the effects, and our distaste for the CGI is really a transferred distaste for the story. 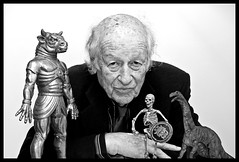 Ray Harryhausen with some of his creations

We’re more forgiving of films with crappy effects that serve a well-told story. We’re willing to give the creator a little slack, particularly when it comes to older films. I recently re-watched Ray Harryhausen’s Jason and the Argonauts with my son and re-loved every minute of it. You can’t help but notice the seams and rivets of this 1963 film, with its stop-motion skeleton army and abundance of reaction shots. Even though the filmmaking tricks are so easy to discern, the movie holds up by virtue of the sincerity with which it was made. Harryhausen, like George Melies before him and Peter Jackson today, was working with the state-of-the-art movie magic of his day and took seriously the task of entertaining an audience. 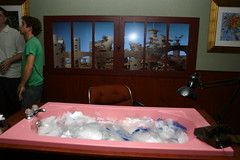 The bathtub from The Science of Sleep

Now that we have a century’s worth of filmmaking trickery behind us, today’s auteurs, working without the budgets of the Finchers and Jacksons of the world, can embrace an equally legit cinematic orientation by flatly accepting fakeness. I’m thinking of Michel Gondry’s Science of Sleep in which crinkled cellophane plays the part of water in a bathtub. Or the antique shop decay of the Bros. Quay or my fave Guy Maddin’s super-saturated Careful, coming soon in a remastered and “repressed” (I assume in many senses of the word) version from Zeitgeist Video. I plan to devote a future post to nothing but Maddin.

So the question of whether the effects of a particular film still hold up isn’t the same question as whether those effects are comfortable in their falseness, whether the strength of the story allows us to reserve our judgment of obviously fake effects, and whether the filmmaker is trying to replace reality or create a reality of his own.