“I just saw a billboard on Houston street, it says ‘where have all the junkies gone?’”

Clocking Some Time With Richard Price

These words appear in Richard Price’s 1992 book Clockers, one of the more powerful examples supporting writer Michael Chabon’s claim that “Price is our best, one of the best writers of dialogue in the history of American literature.”

From the beginning, Price’s work captured a certain heart and energy, particular of an America that was on the cusp of Clinton, eager to close the door on the Reagan-Bush era. Price presented himself as a new John Steinbeck. Where Steinbeck lent an empathetic voice and an authentic portrait of the struggles of rural America-migrants, farmers, and the working class-Price does the same with divergent groups locked together in urban America-the public housing poor, African-Americans, Latinos, cops, the homeless, and immigrants, telling the story of the America that got lost in the boom and bust 1980s, was swallowed whole in the new economy of the 1990s, and became invisible in the new century.

Price has published eight novels beginning with The Wanderers (1974), written when he was just 24. It was turned into a film that now is a cult classic. (Four other Price novels- Bloodbrothers, Clockers, Freedomladn– were also made into feature films).  After his first two books, Price was bored and restless. “I don’t particularly like writing novels,” he says while standing in line at the grocery story, “I need to be around people, be engaged.” The solitary-locked-in-a-room-alone life caused him to turn to screenwriting, allowing him to write without the pressure of being authorial all the time. “Writing screenplays allowed me to learn,” he tells me, “I was forced out of myself, which was good, there is a whole world out there.” One screenplay was the sequel to the classic film “The Hustler.” Featuring then rising-star, Tom Cruise, “The Color of Money” was a critical and commercial success. It earned Price an Oscar nomination for Best Screenplay and more than that it put filmmaker Martin Scorsese back on the map and gave the late Paul Newman his first and only Oscar for Best Actor. 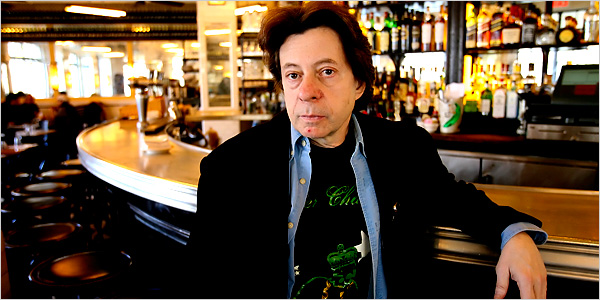 Of the many writers, filmmakers and musicians I’ve encountered none has such a clearly defined approach as Price. Intense and direct and 100% east coast; Price stands apart by capturing the grey area of living in America, exposing the spaces between the cheap and sentimental of the American story, the one where everything is simplistically framed as either “good or evil,” “black or white” or the lynchpin of reductive clichés, as he tells me, “you’re either with us or against us.” Price rejects reductive storytelling out of hand. He offers his latest book, Lush Life, in his defense.

Lush Life pushes Price’s unique novelistic journalism to a new level, documenting a new lower Manhattan where rents surpass $2,000 for a studio apartment that 100 years earlier housed 8 immigrants and cost $12 a month. While gentrification has reshaped the complexion of the neighborhood, it’s done little to change the plight of the underclass that the City has come to depend on to perform its most menial service jobs. For example, in his research Price discovered a huge Fujinese immigrant population, most of which are undocumented, living like ghosts invisible to almost everyone around them.

“Like the Jews during Jacob Riis’ time,” Price tells me, “everything and everyone is living cheek and jowl down there. There is no antagonism down here, there’s no project homeys versus Midwestern laptopers…there’s none of that tension because they don’t notice each other as everyone’s in their own world even though they occupy the same physical space they just pass each other by like it’s a race. It’s like these planets who are miraculously orbiting the same circuit and never crash except,” he says, “once in a while some kids in the project will try to go into the golden interior and jack somebody for money and get up on a package or go our and get Chinese food or whatever.”

Project kids jacking someone for money is the action that sets things in motion. The narrative of Lush Life spins on a mugging that goes wrong when a young white hipster brazenly defies a mugger, a young Latino kid, with the fatal words: “not tonight my man.” For one brief moment, these worlds smash into one another’s orbits and crash. “That’s where you have the great tragic culture clash,” Price says, “he’s never had a gun in his face before, he’s drunk and not particularly street smart and it’s like forget it while the kid with the gun doesn’t understand that there are people around that don’t understand what a gun in the face means.” Price says he’s been to 32 murder crime scenes of which 30 of the victims were Black or Latino. None of the minority murders brought out the media or a high-ranking police official. Maybe these murders received a mention in the police blotter. Of the two that were white, the media and top police officials showed up. “Someone says something and squeezes one off and you have headlines for a week,” Price says, “because the media loves aspiring fill-in-the-blank comes to New York with stars in their eyes and they’re gunned down in the cold, cold streets.” There is a manhunt accompanied by media frenzy and headlines every day. “Then, Price adds, “on day 7 everybody goes back to their own world.”

Through his time researching one thing is evident to Price: real estate rules the day in urban areas like New York. “It’s a combination of Giuliani-time and the real estate market discovering the potential of Manhattan’s Lower East Side,” Price says. According to Price, no politician would be “suicidal enough to knock down a housing project.” So, there are groups of people stuck and shunted to the margins sitting on potentially some of the most lucrative real estate in the city while experiencing some of what the worst that City has to offer in terms of opportunities and services. Price tells me cops refer to this strange contradiction as “a billion dollar view on top of ten cent people.”

You need to look no further than best show ever on televison, The Wire, to see how profound and influential Price’s work has been on American popular culture. David Simon, the show’s co-creator, has on numerous occasions said that the show was based on Clockers. “The whole first season is Clockers,” Price tells me, “it’s the eye level in the trenches view of what’s happening in a city like Baltimore.” Price says the two first met when they shared the same editor. Price just published Clockers and Simon’s latest book was Homicide: A Year on the Killing Streets. They happened to be hanging out together the day the Rodney King verdict came down. Rioting broke out in Jersey City and the two men decided to go and check it out. Later, Simon asked Price to come on board as a writer during the third season of The Wire. “I felt intimidated because I felt these guys thought I knew a helluva a lot more than I did,” Price explains, “the show went absolutely vertical, absolutely panoramic.” Here is the break that defines Price as a writer and as a person. “What I’m interested in most,” Price explains, “is the small stuff that you wouldn’t know about, like the cop owning a grocery in an area that he polices in-even that is not permitted-and sells the steel wool you need for a crack pipe.” That same cop may end up arresting you two days later. Price presents a different, muddier American narrative than the scrubbed clean version dominant in the contemporary culture. “I just saw a billboard on Houston street,” Price points out, ” it says ‘where have all the junkies gone?’” While Price admits that the people he encounters during the four or five years it takes to write his novels are much more philosophical about how things operate in the real world, he doesn’t run away from any of the hard questions with no simple answers. It’s what gives all his work a deep sense of humanity, a life-like three-dimensional quality and richness. “It’s all Rosencrantz and Guildenstern,” Price concludes, “there is no Hamlet.”