The Rumpus: I’m so pleased to have you here, Ariane.

Ariane Conrad: And I’m so pleased to be here, Julie.

Rumpus: And for a thorough introduction, you also have a performing name. HoopGirl?

Rumpus: So I’m speaking with an immortal. How exciting.

Conrad: As soon as the book makes me immortal, I guess.

Rumpus: Right! The book. Let’s talk about this book. You and this mortal HoopGirl have written a guidebook to sex. 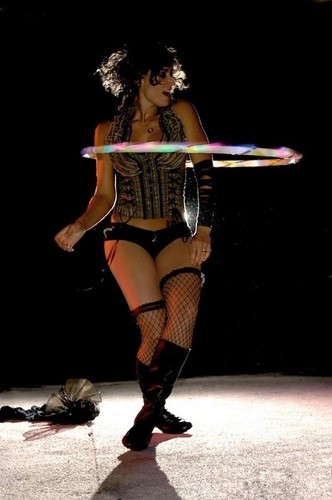 Conrad: Actually, it’s a guide to hooping, the modern form of hula hooping.

Rumpus: Oh come now. Let’s take a look… “activate the muscles in your legs to power your pelvic thrusts,” it says here.

Conrad: Right, in order to keep the hoop in orbit around your waist.

Rumpus: I think we both know you’re talking about sex. How about this: “Don’t anticipate; respond to it. Push into it when you feel it touch you.”

Conrad: I think it says “Don’t anticipate the hoop; respond to it.”

Rumpus: I’m a little shocked that after writing a book like this you’re acting all bashful. I mean, look at these “moves” that are demonstrated by these scantily-clad models: Slinky, Nectar, Garter, and Lickety-Split! Tell me about this move, the Lickety Split.

Conrad: Well, in Lickety-Split you start by kneeling on the floor, then lowering yourself onto your butt and spreading your legs, and then rolling over again so you end with kneeling on the opposite knee you started with. All while keeping the hoop spinning in your hand overhead. 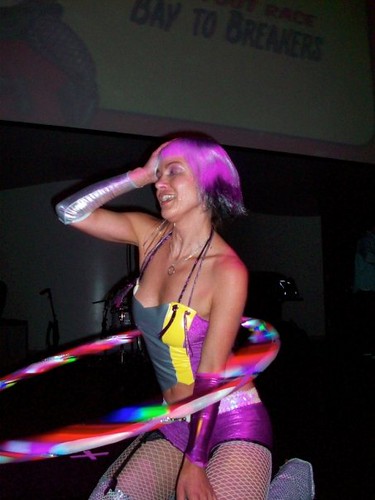 Rumpus: Uh-huh. And I believe this is you, depicted here on page, uh, 169, demonstrating a move called Fantasy?

Conrad: You lift one leg high and pass the hoop hand to hand underneath it. That’s the Horizontal Whisper.

Rumpus: You’re forgetting about the hissing noise the book says to make while lifting your leg.

Conrad: Well, that’s just a suggestion. HoopGirl uses a lot of vocalizations in her classes to intensify the experience.

Rumpus: Right. Vocalizations. There’s also a lot of heavy breathing prescribed. And I counted multiple mentions of the words “surrender” and “stimulation.”

Conrad: We do have a chapter devoted to the sensual nature of hooping and the stimulation of the sacral chakra, but it’s a lot more than that. It’s straight fitness, too, a workout. For some people it provides spiritual centering, for others hooping functions as a highly effective anti-depressant. And it’s a form of dance!

Rumpus: Ecstatic dance, I think it says. Don’t get me wrong—I think it’s high time that a book of instructions specific to a single sex toy was made available. These things can be very complicated.

Conrad: I wouldn’t call the hoop a sex toy.

Rumpus: No one’s going to report you to Barnes & Noble. You even call them “adult hoops.”

Conrad: Yeah, that’s as opposed to the skimpy little hula hoops meant for kids. Adult hoops are bigger around and made of thicker tubing. Makes it way easier to, uh, keep it up.

Rumpus: So size does matter.

Rumpus: Exactly.  So. Let’s come right out and say it. On page 171, you quote Dr. Christiane Northrup, a mind-body health pioneer—and herself a hooper— as saying “Women who have healthy, strong pelvic muscles…tend to have more fulfilling sexual functioning with better pelvic blood flow, better vaginal lubrication, and stronger orgasms.” Then Northrup recommends a Hula Hoop. So: can you tell me about the studies that lead to these conclusions? Are they still enrolling? 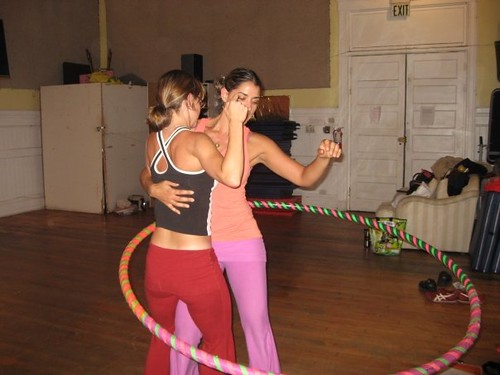 Conrad: I’m not sure what exactly Dr Northrup’s referring to. But there are lots of places to take hooping classes so you can draw your own conclusions…

Rumpus: So based on the people showcased in the book and the company name, HoopGirl, we can assume that classes are just women, right?

Conrad: Everyone’s welcome. Including men! There are a lot of male hoopers, straight and queer!

Conrad: Anything is possible. That’s certainly the feeling that hooping grants me.