I was all ready to feel guilty. A group show of environmentally themed artworks–what other response is there? But I didn’t. Next New: Green, at the San Jose Institute of Contemporary Art, manages to approach the subject of climate change and the environment without pointing any fingers. This is good, because I already feel bad enough about the not-always-recycling thing.

The nine participating artists don’t buy into the idea of a pristine natural world, a blank slate that our slovenly practices have ruined. The viewer is spared images juxtaposing red Southwestern deserts with man-made blights, a natural setting that would be so pure if it weren’t for the intrusion of the artificial. 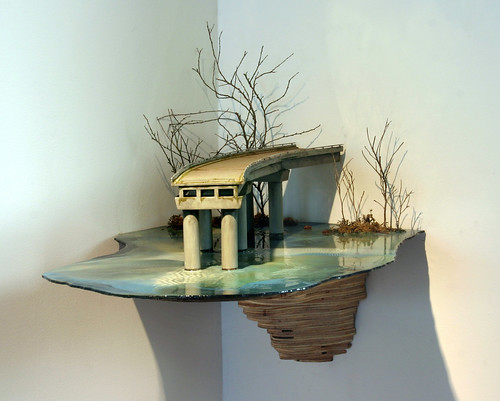 This is good, too. If there was ever a separation between the natural and the man-made, the distinction no longer exists. In today’s world, cell phone towers pose as trees while park rangers strive to recreate a forest’s “natural” burn cycle. We humans are all up in that nature stuff. Nothing’s pristine.

The artists–Michelle Blade, Collette Campbell-Jones, Misako Inaoka, Vanessa Marsh, Carson Murdach, Sandra Ono, Ryan Pierce, Rebecca Rothfus, and Michael J. Ryan–seem to accept that nature is already spoiled. They proceed from this place to imagine mythic landscapes of surreal possibility. The strange (and best) thing about their work is that it’s infused not with a sense of loss or horror, but with a sense of potential. 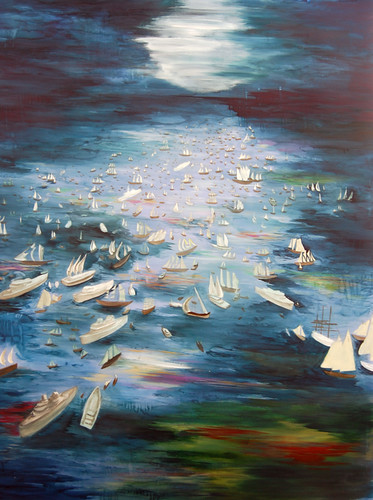 Michelle Blade’s work best exemplified this feeling. In “Facing an Abyssal Sea,” an impromptu regatta gathers in the night. White-sailed boats twist this way and that, carried by the current. The setting is somewhere away from it all, either before everything started or after it’s all ended. I imagine it’s probably polluted, but still I want to swim in that water, murky, black, lit by the moon. In “We are Like the Not Yet Full Moon (Meteor Shower),” campfires burn and small groups of people come together beneath an impossibly large orb rising from behind the rocks. Blade’s vision of the apocalyptic future is a place where humans are forced into collective action. They gather and organize and consult against a stark background of barren earth. The world may be ending, but they’ve finally found each other. It’s something like a silver lining. 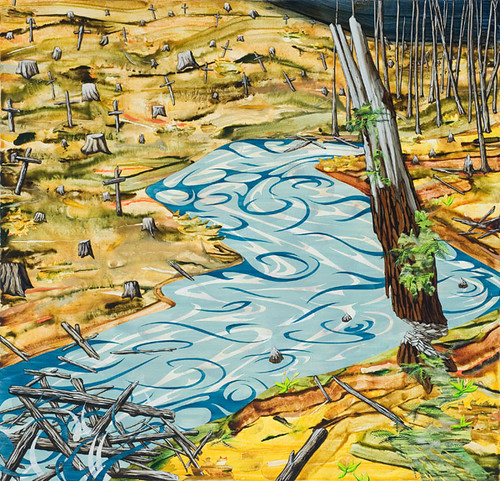 Next New: Green is on display at the San Jose Institute of Contemporary Art through September 20. The museum is located at 560 South First Street, San Jose, and is open from 10 am to 4 pm, Tuesday through Friday, and from noon to 5 pm, Saturday. Admission is free.