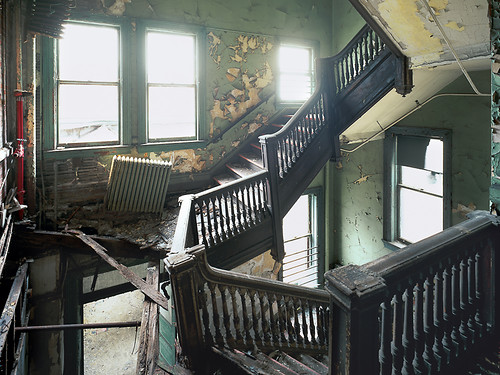 You’re not supposed to look at the dying, the dead; you turn away. Oakland-based photographer Katherine Westerhout looks.

Westerhout takes pictures of falling or fallen cities—Pittsburgh, Buffalo, Detroit—focusing on sites of deserted industry and community. She spatially and temporally trespasses, highlighting such spaces’ scars and water damage, ugly backsides and decay. Nobody’s supposed to see this stuff.

Her photographs, on display at Electric Works through February 27, are now up for everyone to see. Like other visually stunning images of decay (Richard Misrach’s photograph of a flooded house, done in 1985, comes to mind), they inspire wonder, dismay, even guilt. Wonder for the imagined lives that unfolded in these places; dismay over their abrupt ends; guilt for not stepping in to stop it. 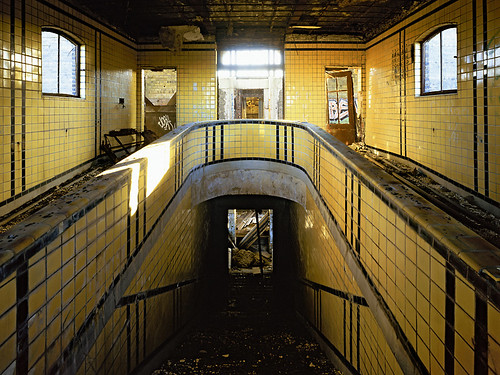 Westerhout photographs empty steel factories and fiber mills and also the crumbling interiors of ballrooms and fading church pews. In doing so, she illustrates the connection between economics and culture—when the jobs end, so do the parties and the preaching. Her specificity distinguishes her work from overplayed narratives about the fall of Detroit, the fall of Flint, the fall of (fill in the blank). “Protestant Church, Detroit” (2009) illustrates that city’s peak and demise as well as or better than any statistics. The church’s remains—its lofted ceiling, grand organ, light fixtures and archways—convince those of us who didn’t live through the period that Detroit really did have an extended heyday; the city has not always been a collection of vacant lots and weeds and houses sold for well below market value. It seems fitting that, on first glance, it’s difficult to tell if the ochre highlights on the church’s ceiling are gold or chipping paint; how quickly one can become the other seems to be the artist’s message.

Like any thoughtful exploration of death, Westerhout’s images speak to both absence and presence. “Aquarium, Belle Isle” (2007) gives us an abandoned aquarium tank, a ladder and a long-handled net leaning against the glass like a stage set abandoned mid-scene. The leftover tools invite us to imagine the aquarium worker who dipped the net into the tank, who scrubbed the glass, who drained the water. We read their actions through what has been left behind. It is a haunting negative space that is nevertheless full of legible information.