“I used to always think of paintings as big large novels. And then all of these little drawings that I’ve been making, I think of them more as a bunch of poems equaling a chapbook or maybe a bunch of short stories…”

The Rumpus: A lot of your work is in your face, literally. What is your fascination with portraits and the face?

Jake Gillespie: Well, I’ve always liked doing portraits, and mostly just faces, ever since I was a little kid. And I think that has to do with maybe when you’re younger you’re trying to make an image that’s identifiable. And, you’re copying Batman or Charlie Brown or something like that, Calvin & Hobbes. So, it’s a good place to start. And obviously, through the eyes and things like that, there’s a lot more description than maybe a hand or an elbow, you know? So, it’s a better part to draw.  I’ve always done faces. I’ve gone through small periods of non-representational art in college, but more or less, I’ve always done that.

Rumpus: One of my favorite pieces is a video of a series of portraits with a guy who has hair all over his face like a chimp. What sparked that idea? Or having a series of illustrations like that—when did you realize that that worked? 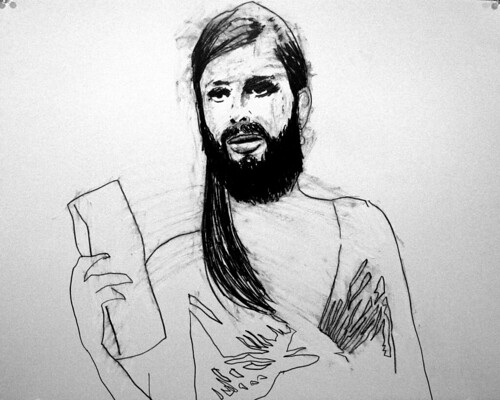 Gillespie: Well, the guy with the hair on his face, I think what I was going for with that is a sense of like growing a shell or a protective thing over his face. At first it’s just—he’s growing a beard, which I think, oftentimes beards are complicated I think because they can be used aesthetically. They can be used to hide things. Even culturally it’s like a woman who dates a gay man is called a “beard.” You know, things like that. So, there’s a lot of things culturally that go with beards. But then I thought it’d be interesting where, as he grows the beard, if the hair continued to go over. And then it became so dense that to me it sort of was almost like a covering like a bark on a tree. And then he was just left with his eyes. And then at the very end, the tree rings kinda pop-out on the left hand side and then of course the tree stumps. So, then I think that those two images speak to each other hopefully.

Rumpus: Did you conceive that story beforehand or did that grow as you began to draw?

Gillespie: I knew I was gonna give him the facial hair, and I knew it was gonna continue. It’s gonna block out his face. I’m doing frame by frame so it takes forever, you know. It’s each little line,  and then take a picture of the little line, take a picture. So, I had plenty of time to think about it when I was working on it. And then finally at the end, I did think of the tree stump and I thought that those two images would kind of bounce of each other.

Rumpus: In another series that I saw, a boy’s ear opens up and then eventually it looks like maybe something’s coming out of his mouth and, you know, blood or chaos of some sort is erupting, right?  Did you have a story in mind for that that could only be told in multiple frames?

Gillespie: Kind of. The actual little boy I got from a book a long time ago, and it’s a book with kids with hearing disabilities. In the real photograph, he’s getting his hearing aid adjusted, so he’s screaming because it’s this piercing weird noise. I don’t have a hearing aid so I don’t know exactly how that happens. At first it was kind of like the dotted lines were coming out of his mouth. And, like in comic books, dotted lines and word bubbles mean it’s a secret as opposed to a solid outline word bubble. So, it was kind of like he was screaming something secretive. And then maybe nobody’s listening. So then as he was doing it more and more, then it just became these kind of denser uglier lines and trying to show more frustration. And that’s all out of his mouth. And then at the end, it starts to come out of his ear, the other direction, which is sort of like he can’t express himself enough that one way that he’s finding an alternative way to express himself. 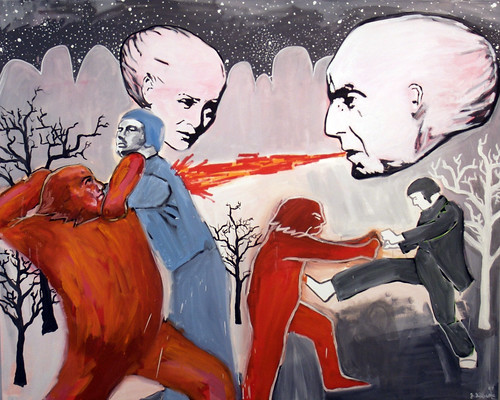 Rumpus: I love all the layers and everything behind that. Was there a point, when you first started doing a series of illustrations, where you’re like, “Oh, I’m on to something here.”

Gillespie: Well, I went to college for painting. And that’s what I’d always done is painting, and that was the bulk of my previous work. And then upon moving here, I no longer had a studio, so I couldn’t make these paintings that I was used to—and they were pretty large-scale things. And the economy of where we were back home is completely different than here. So, what my wife and I went through is this huge series of reductions of things and objects and, you know, what we bring with us and live with. And then I went through a reduction in my work. I went from these big paintings to smaller drawings. And when we first got here, I started just really trying to simplify images away from how I had been working. Now it’s been a couple of years that I’ve been making these drawings, and I think they’ve just sort of grown organically, like I didn’t have a plan at all in the beginning.

Rumpus: And then video, is that new for you too?

Gillespie: I’ve made videos before I moved here, but they’re pretty jokey, silly kind of things that you would see on like YouTube or, you know, on my better days, more like Adult Swim on the Cartoon Network—things like that, nothing nearly as good as those. And then when I moved here, I started to concentrate more on trying to combine more fine art, drawing, painting, things that I went to school for, and then combine them with the videos to see if I can make one big cohesive thing.

Rumpus: Well, something with the videos too struck me. There’s one where there are faces and then as time goes on, the tempo goes faster and the relationships change and everything until you’re just getting bombarded with all these images that can be disturbing.

Gillespie: That one I think you’re referring to is called Glasses Family. And it’s the night before we moved here, I had everybody in my family put on my glasses and I took pictures of them. Because I had this idea of—I wanted to see the new experiences that I was gonna have maybe through their eyes, and also see them through kind of a different perspective. And naturally, none of them could see in reality through my glasses ’cause I have a horrible prescription, you know, you can’t see anything, and vice versa. And so I took these pictures of them, and I’m not much of a photographer, but I did do that before we left. And then I drew and watercolored all of those images. And then yeah, the way I built it was as best as I could is the glasses stay stationary and then the faces revolve. And then as you said, then they speed up faster and faster. But since we’re all related, either by marriage or genetically, it’s sort of like we’re all sort of the same people. We’re all part of each other. And so I wanted to have this kind of dizzying blur of faces that are all different, but they have a very deep connection.

Rumpus: You mentioned that you’d started experimenting with video, maybe simplifying the drawings since you moved out here. How does this style fit in with the trajectory of your career as an artist?

Christopher Read has written about film and filmmakers for the San Francisco International Film Festival, Indiewire and the Film Arts Foundation. He also works as an IT consultant and Braille producer at San Francisco State University. More from this author →