Lantz forces us again and again to reexamine the way we see through such juxtaposition of facts as well as through the voices of characters who search for and experience improbable things.

Nick Lantz made his mark in the poetry community this year by winning not one but two first book prizes, and thus having, in effect, two first books debut this spring. This fact alone has drawn readers to his work—who is this prolific guy, and how did he snag two of the few-and-far-between poetry book prizes last year? But now that the books have appeared in print, the question I began to ponder was how would the two relate to each other, how differentiate themselves? We’re used to charting growth and change in a poet through subsequent books, but in Lantz’s case we don’t know which came first (or whether one did at all). It provides a nice little conundrum, not one that needs solving, but which offers interesting ways for a reviewer to think about not just a single book as a project, but glimpse a larger vision in an emerging poet.

Nick Lantz’s books probe the psychology of our modern world—in both We Don’t Know We Don’t Know and The Lightning That Strikes the Neighbors’ House we are made to look around ourselves at the American culture in which we live and consider just what we have created. It’s not pretty. We Don’t Know We Don’t Know takes its title and many of its epigraphs from Donald Rumsfeld, for example, and calls our attention to the intentional corruption of language that that administration foisted upon the country to justify a war. My favorite quote Lantz has included, after all this frustrating business about known knowns, unknown knowns, known unknowns, and unknown unknowns, is Rumsfeld’s explanation that “If I said yes, that would then suggest that that might be the only place where it might be done which would not be accurate, necessarily accurate. It might also not be inaccurate, but I’m disinclined to mislead anyone.” It’s only funny because it is so misleading, of course. The tail-chasing language of politics and profit has dismayed poets forever, but the audacity and extremity of it during the Bush administration seemed to push a huge portion of the nation to a breaking point. Lantz has his finger on the pulse of the patient here—he chronicles the psychological trauma, through first person, second, and several other characters invented and historical, of disconnection between what is experienced and what is broadcast.

And thankfully there are antidotes. We Don’t Know We Don’t Know pairs Rumsfeld’s language of obfuscation with Pliny the Elder’s wonderfully inquisitive and incisive discussion of the natural world and humans’ place within it, providing, through that juxtaposition, some relief that there is still a place for logic for those of us looking for it. And the poems in this book, as a whole, investigate that logic—they attempt to locate humans, and human understanding, in this seething and misleading landscape. In comparison to bees, to swine, to apes, to parrots, Lantz places our species, offering us new contexts in which to understand who we are and how we behave. In one instance, for example, a mother receives a parrot from her son:

Then one day it says, ‘infect.’

Your mother tells you this on the phone,
and you drive over, find the frozen meals
you bought for her last week sweating
on the countertop. “In fact,” she says

in answer to your question, “I have been
eating, and it’s as you point to the empty
trash can, the spotless dishes, that you
realize the bird is only saying, ‘in fact,’…

In other poems, creatures appear more briefly, perhaps as reference points away from the human, and inevitably dismaying, scale of the world. For example, in “Homeless in the Land of Aphorism,” the speaker directs us to think of all kinds of things outside our range of daily experience:

The poem ends by directing our attention to renewal of life, even if it’s not our own:

“Tell me/ again who I am answerable to,” Lantz asks in “ ‘The resemblance that Apes have to men.’ ” It seems a request for connection to a natural world we have cut ourselves off from, to a logic that binds and roots us. Through examining the language of obfuscation and bad faith up close, he pierces a hole for us to another side, another way to see, and tell about what we find. 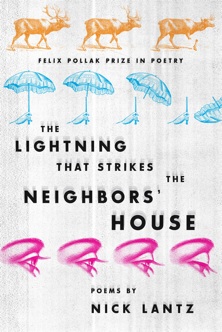 Lantz’s other book, The Lightning That Strikes the Neighbors’ House, shares the same central concerns with logic and connectedness, but the poems hold together not through an external construct such as Rumsfeld’s logical structure, but through the subtler and slowly-accruing elements that bubble up within the poems themselves. Here, too, the use of juxtaposition makes every statement stand up and demand consideration. Where in We Don’t Know We Don’t Know those juxtapositions were between the natural world and spoken phrases (those misuses of language we heard from the administration as well as those that pepper our daily speech, like “in fact” and “as you know”), here they are often between documentary facts of various types—historical, folkloric, scientific, personal. For example, in “The Diving Horses,” we get this sequence of statements:

You know how the old stories go: the peasant’s hut
grows a little smaller every
day, the frog by the window
a little louder. It’s a miracle we can sleep at all.

In the hotel room the night after
your brother’s funeral,
we watched a bad movie about horses trained to jump
from a platform into a small pool
forty feet below.

In the first garden, the fruit didn’t know when to drop.
So what if starvation is the only thing
that can make
the young albatross use its wings for the first time?

Lantz expands and contracts the scale on which he views the world constantly, so we are asked to read every detail within a new and strangely-fitting lens. Suddenly the diving horses and their willingness to go (“The horses, we’re told, required very little prodding”) become a great tragedy, a comment on something much larger and more human. Meanwhile, the brother resonates as well, full of mystery—and yet made animal, his death another inevitability in this chain of facts (just as “Without the fox’s teeth deep/ in the hen’s downy neck,/ we would starve”).

Lantz forces us again and again to reexamine the way we see through such juxtaposition of facts as well as through the voices of characters who search for and experience improbable things: a cryptozoologist, those listening for aliens with SETI, a sci-fi actor, a werewolf. The Lightning That Strikes the Neighbors’ House becomes a lament not only for the neighbors and their tragedy but for ourselves—that we’re unharmed, that we can keep on keeping on. Mom replaces our dead pets; Theseus’ ship is so well cared for by the Athenians that each rotting plank is replaced until nothing is left of the original. There’s a sadness in surviving, in finding out one can keep going even after the metaphorical end. Lantz diagnoses us with this sickness, dubs it “affluenza”—but he doesn’t stop at despair. He examines our state, questioning what’s left to us. As in “The Marian Apparitions”:

. . . the lie of poetry saves no more lives than the lie
of prayer. A birthmark. A bruise.
The gory Rorschach
of a red river delta seen from a plane. For every
piece of falling fruit we catch,
a hundred others

find the ground and rot. And what we do catch fares no better.
What does it mean, even if
the Virgin really is in that peach pit,
that dirty bed sheet? Does she bless or curse
the things she touches?

In this form of tight contrasts and strangely intimate images, Lantz lets us look sideways at our world. He outmaneuvers linear patterns, finding resonance in the most unlikely pairings—knowing, as he says in “The Cricket in the Basement,” that “Every aim/ is an asymptote,/ and the blind spot is in the center of the human eye.”

Disclosure: I should note that my interest in Nick Lantz’s work was further piqued when my mother sent me a box of books I’d stashed away years ago, in which I rediscovered an old literary magazine from my senior year of high school, when I was that august publication’s rosy-cheeked editor. Though my tastes were woefully undeveloped, I would like to think the staff and I recognized talent when we saw it. (We also published anything vaguely anarchic or grotesque.) At least I can say we did publish a few of Nick’s early poems. I will not quote from them here out of respect for my subject (and because he could easily return the favor by exposing my own “poems” from that period). We didn’t know each other more than in passing—it was a big urban high school—but we shared at least one beloved iconoclastic English teacher (also possibly an anarchist). I was, therefore, delighted to see this double debut and to be asked to review it.

Rachel Richardson's poems have appeared in the New England Review, Southern Review, Ninth Letter, Memorious, Shenandoah, and elsewhere. A recent Stegner Fellow, she has led poetry workshops in prisons, elementary schools, and universities, and currently teaches at the University of North Carolina at Chapel Hill. More from this author →