I finished The God of Small Things in a pleathery airplane seat 30,000 feet above who-knows-where during the year and a half I lived in India as a speechwriter for an executive there.  The flights between the chaos of India and the pressure of the next speech were some of the most relaxing moments in those 18 months.  So usually I opted out of thinking, settling somewhere between Zac Efron, Bollywood and free wine.

The God of Small Things was an unintended exception to my No Thinking On Airplanes Rule that I must have picked up at the airport gift shop in some kind of homage to my new life in India.  Non-linear and poetic, The God of Small Things intentionally interrupts, forces you to reread entire paragraphs; sometimes for meaning, sometimes for awe.  I audibly gasped my way through it, the reading prolonged by a perpetual need to fish a pen out of my purse to underline perfect passages.  Even when the story disturbs – and it must be said, if you have a pulse and even a dime-sized heart, it will disturb you – even then, it is a beautiful disturbance.

Take this passage for example.  Read it; then close your eyes and drink it:

Once the quietness arrived, it stayed and spread in Estha. It reached out of his head and enfolded him in its swampy arms. It rocked him to the rhythm of an ancient, fetal heartbeat. It sent its stealthy, suckered tentacles inching along the insides of his skull, hoovering the knolls and dells of his memory; dislodging old sentences, whisking them off the tip of his tongue. It stripped his thoughts of the words that described them and left them pared and naked. Unspeakable. Numb. And to an observer therefore, perhaps barely there.  Slowly, over the years, Estha withdrew from the world. He grew accustomed to the uneasy octopus that lived inside him and squirted its inky tranquilizer on his past. Gradually the reason for his silence was hidden away, entombed somewhere deep in the soothing folds of the fact of it.

The God of Small Things is 32 flavors of love.  Some you long for, some you pity, some you shield your eyes against in disgust, much of it forbidden.  Love that defied the class system, lost love between exes, love of a mother, love between twins.

It’s the last kind of love that turned the book personal for me – I have an identical twin sister, Marie, and Roy brings the enigmatic world of being a twin to life so perfectly:

In those early amorphous years when memory had only just begun, when life was full of Beginnings and no Ends, and Everything was Forever, Esthappen and Rahel thought of themselves together as Me, and separately, individually, as We or Us.  As though they were a rare breed of Siamese twins, physically separate, but with joint identities. 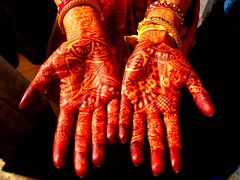 Separate, but joint; that’s exactly what twinhood is.  Being a twin is like getting married the day you’re born; an arranged marriage.  No one asks you for an “I do” of consent, but they’re yours and you’re theirs, for better or worse; bound by a knowing that only shared DNA can achieve.  ‘Til death do you part, because parting a moment earlier would deprive you of half of what it means to be you.  Maybe that’s what struck me – the twins in this book are separated at age seven, and only reunite again at 31.  And, while there were many years I lobbied for a twin divorce, mostly I can’t imagine figuring out high school, hormones, and training bras without Marie.

Living in India, I found myself 8,000 miles from her, and from everything I knew to be familiar.  I was only supposed to be there for six weeks, helping set up a department for my company.  I was speechwriter for the CEO at the time; and his only condition for my going to India to do this project was that I would come back.  Of course I would come back; I’d just bought a condo, he’d just promoted me, my life was in California.

Six weeks later I did come back – to tell the CEO I’d fallen in love.  With India, where every sight, smell and sound is a hyperbole; its vitality, the adventure inherent in one simple ride home from work – it captured me.

I don’t think I recognized it then, but I can see so clearly now why moving to India was the perfect escape from a decision I had just made that would divide my past from my future, me from my community, the God I once believed in and the God I was no longer sure of.  But at the time, it just seemed like an adventure.

So I stayed for 18 months; we moved in together, India and I.  And I learned a little something about love – that there is a difference between loving something, and living with it.  (Something I’m guessing my married friends can dedicate long, drunken monologues to.)

And, after an 18-month love affair, as often happens with love, what once was exotic became tiring.  The excitement of everything being new eventually meant never really knowing what was going on.  The sensory fireworks that brought me to India wore on me.  We never fell out of love, India and I.  We just eventually decided that we were right for each other for only a period in time; and, 18 months later, that time was up.

And in the inevitable meaning-making of departure, India taught me a few final lessons.  I often tell people that, as Americans, we simply don’t have scales in our heads that go high enough or low enough to calculate India. If we think living, loving and solving problems in America is difficult (and it is), imagine doing so in a country with thousands of years of thorny history; dozens of languages; nearly four times the population and one-third the geographic size; over 740,000,000 people living in remote villages (more than double the United States’ entire population); and less than 65 years’ distance from being a colony.

This is why I have no idea how to answer the question most asked of me in the six months since I returned: what’s India like?  It’s this complexity Roy captures so beautifully in The God of Small Things.  In particular, she illustrates the complex cultural clashes between classes: forbidden love between a Touchable and Untouchable; characters grappling with a love-hate post-colonial complex with Britain; a father whose mix of fear and gratitude for the upper caste brings him to facilitate his own son’s death.

It is in playing out this son’s death at the hands of the police that Roy beautifully describes the compulsion to classism still so evident in India (and most everywhere else) today:

Blue lipped and dinner plate eyed, [the twins] watched, mesmerized by something that they sensed but didn’t understand: the absence of caprice in what the policemen did. The abyss where anger should have been. The sober, steady brutality, the economy of it all.

They were opening a bottle.

Or shutting a tap.

Cracking an egg to make an omelette.

The twins were too young to know that these were only history’s henchmen. Sent to square the books and collect the dues from those who broke its laws. Impelled by feelings that were primal yet paradoxically wholly impersonal. Feelings of contempt born of inchoate, unacknowledged fear — civilization’s fear of nature, men’s fear of women, power’s fear of powerlessness.   Man’s subliminal urge to destroy what he could neither subdue nor deify…

What Esthappen and Rahel witnessed that morning, though they didn’t know it then, was a clinical demonstration in controlled conditions (this was not war after all, or genocide) of human nature’s pursuit of ascendancy. Structure. Order. Complete monopoly. It was human history, masquerading as God’s Purpose, revealing herself to an underage audience. .. They were not arresting a man, they were exorcising fear.

The most egregious part of the caste system, Untouchability, has been illegal for 60 years now in India; but its ghosts live on, evidence of a law’s limited grasp.  Something that plays to our human instincts of power and subservience is easily banned in a courtroom, but I doubt ever completely in homes, schools, hearts.

I lived just a small taste of this in India; my driver, Gowrishenkar, the most poignant example.  As with most expats, my company hired a driver to take me here there and everywhere, saving me from the living Frogger game that is driving in India.  I probably spent more time with him than anyone else in India.  I fought for his bonuses, paid his hospital bills, visited his family in their village (one of the sweetest hours of my life).

But in 18 months, he never once called me Karen.  I asked him to, many times.  And then I stopped asking, the day I realized that what I considered respect he considered disrespect.  Calling me Karen instead of “madam,” no matter how much time we’d spent together, would have caused him a discomfort that my American mind will never totally understand.  Contrast this to New York where, five minutes into a taxi ride, the driver will call you by your name and a dozen other names not fit to print.  There was a hierarchy, an unwritten code that stood between Gowrishenkar and my first name.

These were the kinds of differences that made every day in India a classroom.  Why do grown men and women live with their parents, gladly?  How can you possibly trust your parents to choose a spouse, when I wouldn’t even trust mine to pick me out a pair of pants?  Why couldn’t my best friend in India get a divorce?

I stayed there long enough to learn the answers to these questions.  Just long enough to know not only the answers, but to understand them.  And even accept them.  And this was India’s final lesson.  In coming to accept the incomprehensible, I learned, simply put, that people do things for a reason, and that reason isn’t (usually) because they’re stupid.  Mostly it’s because they’re coming at it from a different angle, a different culture, a different history than you.

So I find now that there are very few things I can call definitively good or bad.  My brother thinks this makes me morally relative.  I think, or at least I hope, it makes me persistently open to the possibility that I’m wrong, or that there might be a different way to do what I do than I can imagine.

Mostly now I call things not good and bad, but different-different.

When I finished The God of Small Things, I closed it gently, sacredly.  Placed my left hand on the back cover; my right hand on top of the other.  I think I closed my eyes.  And I marinated in a blend of pity and disgust for the characters, and awe for the words that brought them to life.

It could have been the jet lag; maybe it was preemptive nostalgia for my inevitable departure from India.  My past, present and future were at such odds with each other at that moment in time.  And all I could do in that moment was call the me who once was and the me I was becoming different-different, and hope I’d some day live into reconciliation, understanding, and, if I was really lucky, acceptance.

Karen lives, writes, and produces radio in New York. More from this author →