Mary MacLane was born in 1881 and died in 1929, and in the intervening years wrote three books, beginning in her late teens with The Story of Mary MacLane (republished by Melville House under MacLane’s intended title, I Await the Devil’s Coming). That book sold more than a hundred thousand copies, inciting scandal and inspiring parodies “by the ream.” An average American newspaper-reader in the first decade of the last century immediately understood, if he read that something was “of the Mary MacLane type,” that this name was shorthand for outsized self-absorption of a specifically feminine nature.

Unfortunately for MacLane, her subsequent books did not seize the public imagination in the same way as her initial effort had, though her skill and talent had evolved considerably by the time she published I, Mary MacLane in 1917. Reviewers mocked her for being frivolous, boring, and myopically self-obsessed. She became ill and possibly alcoholic. When she died, broke and alone in a Chicago hotel, her New York Times obituary’s first sentence described her as a “writer of sex stories.”

Over the course of the past century MacLane’s oeuvre has occasionally been reevaluated and she has been minorly republished and anthologized; she has been claimed as a pioneering feminist, notable bisexual and even as a prominent Canadian (she was born in Manitoba). Butte, Montana, where I, Mary MacLane was written and which Mary MacLane reviled for its provincial conservatism, now celebrates her as a famous daughter. But for the most part she is forgotten, and her books are no longer read.

This might be in part because these diaries are not particularly inviting to readers, at least not initially. MacLane’s defiant, exclusive celebration of herself can seem to obviate the need for anyone else’s interest.  After a few pages of declarative sentences that all begin with “I,” it’s tempting to put the book down. But readers who resist that temptation will be rewarded. If you are patient and indulge her for a few pages of “I am a genius,” you will be treated to a glimpse of the Mary MacLane who deserves canonization alongside Virginia Woolf and Emily Dickinson and Gertrude Stein as an early illuminator of precisely what it was like to be conscious, moment to moment, in a time when personal and honest revelations of women’s subjectivity were not simply shunned (as they are now) but actively, violently discouraged. As I, Mary MacLane progresses, what seems at first like overweening egotism—in part because MacLane describes it, proudly, as such—comes to seem not only understandable but justified.

MacLane had interesting thoughts and the ability to describe and record them, and the temerity to imagine that other people might be interested in them, too. This temerity verged, of necessity, on insanity. Writing at a time when women were supposed to be silent and virtuous, MacLane had to be at least a little bit crazy in order to be able to create anything at all.

Via her diary entries, which are all headlined “tomorrow” in a nod to Macbeth’s soliloquy about the “petty pace” of repetitive, painful days, a portrait of MacLane gradually emerges. Her initial fame, she writes, allowed her to escape her provincial Midwestern hometown and spend her twenties living in Boston and Greenwich Village, with summers in Florida and trips to Europe. While living in New York, she wrote newspaper dispatches of her experience of the city that are some of her best work; these incidental pieces hint at what she might have been capable of writing if she had been encouraged to explore her descriptive powers in a less exclusively self-directed way. But at twenty-seven she caught scarlet fever and had to spend the next two years recuperating, and this is the Mary MacLane we meet in this book. Being ill was “the most crucial bodily adventure she had known,” and she emerged from her sickbed a changed woman, mentally and physically. I, Mary MacLane is a memoir of convalescence by someone who has new cause to record and decode every detail of her material and emotional life.

The tragedy of Mary MacLane’s life was twofold, and its first tragedy is fairly obvious: she was writing at a time when the deep misogyny of American culture had only begun to be exposed and dismantled enough for her to exist, and the patriarchy was not nearly subverted enough yet for women like her to prosper and thrive. But the second tragedy of her life was that the medium she was born to write in had not yet been invented. MacLane’s public diary entries, with their succinct, crystalline descriptions of quotidian events, would have made her an instant star on the Internet, if the Internet had existed in 1902. She was a blogger avant la lettre, to an extent that is almost eerie.

Her concern with the quotidian is what makes her writing so well suited to, say, a Tumblr. She describes her outfits and her meals, her aimless walks and her reading habits, the quality of her shoes, and in doing so she creates the impression of being imprisoned, somewhat, not just in Butte but inside her own mind. She writes of having an overwhelming impression, which she can’t confirm, that there might be women all over the country and perhaps all over the world who are as fervid-minded and as bored as she is, and she wishes she had a way of connecting with them:

While I sit here in this midnight in a Neat Blue Chair in this Butte-Montana for what I know a legionwomen of my psychic breed may be sitting lonely in neat red or neat blue or neat gray or neat any-colored chairs—in Wichita-Kansas and SouthBend-Indiana and Red Wing-Minnesota and Portland-Maine and Rochester-NewYork and Waco-Texas and La Crosse-Wisconsin and BowlingGreen-Kentucky; each feeling Herself set in a wrong niche, caught in a tangle of little vapidish crosspurpose: each waiting, waiting always—waiting all her life not hopeful and passionate like Eighteen but patient or blasphemous or scornful or volcanic like Early-Thirty: the waiting-sense giving to each a personal quality big and suggestive and nurturing—and with it a long-accustomed feeling like a thin bright blade stuck deep in her breast; each more or less roundly hating Waco-Texas and Portland-Maine and Red Wing-Minnesota and the other places: and each beset by hot unquiet humannesses inside her and an old yearn of sex and the blood warring with myriad minute tenets dating from civilization’s dawn-times.

The poignancy of this passage has to do with its deep familiarity—versions of it are being written on WordPress and Tumblr and even as Facebook status updates, every day. But it is also poignant because we know that MacLane was not alone; there were women just like her, sitting full of thoughts and feelings that had no outlet. Now at least modern-day MacLanes can easily confirm their suspicions that women like them exist. 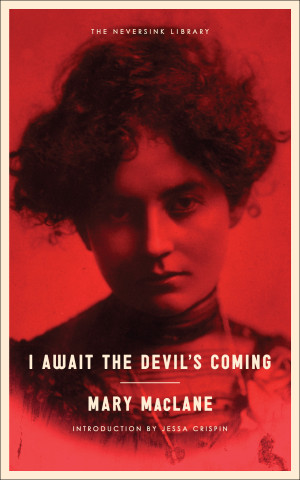 It’s impossible to overstate how much reviewers hated MacLane and how deeply they held her in contempt, citing her “vulgarity” and calling her book “a revelation of self which is not interesting or sympathetic.” Their insistence on calling her “boring” quickly begins to seem absurd: if she was so boring, why were they so obsessed? Critics also insisted that she was doing the world a disservice by getting attention that they (disingenuously) declared ought to be granted to presumably worthier writers: “Think of the hundreds of poor lonesome girls working away at the making of literature who cannot get their literature printed and published.” When asked to explain MacLane’s popularity, they mostly just threw up their hands in befuddlement: “People go wild over young girls writing slush about themselves,” the author of a MacLane parody “explained” in 1902.

Reading these reviews and parodies provokes the same sense of familiarity as MacLane’s writing does; I’ve read these criticisms before, many times, in reviews of books that were published much more recently. I read a review like this of Sheila Heti’s novel How Should A Person Be?. Just last week I read a review like this of Kate Zambreno’s Heroines. And of course, my own first book, a collection of autobiographical essays, received a similar critical reception: I was taking up space worthier writers should be filling, my concerns were trivial, I was not interesting. Several reviewers expressed faux concern at the way I had “exploited” myself by writing about sex and implied that I had “invaded the privacy” of men by writing about my relationships with them.

I had to spend some time wondering about whether I had done either of these things. Luckily I discovered MacLane soon after my book’s publication, and around the same time I read I Love Dick by Chris Kraus.

In that autobiographical novel, which concerns Kraus’s crumbling marriage to literary theorist Sylvere Lotringer and her affair with art critic Richard Hebidge, Kraus anticipates this kind of criticism and addresses it directly. “Why,” she wonders, “does everybody think that women are debasing themselves when we expose the conditions of our debasement?”

Kraus’s revolutionary reimagining of privacy—her calling into question of whom it is, exactly, that “privacy” is intended to protect—saved me from believing that I had erred somehow by attempting to describe the reality of my own life, rather than transmuting it into “fiction” and thereby, at least theoretically, protecting myself and the people I wrote about from “exposure.” Writing about Kraus’s book, critic Elizabeth Gumport explains that:

What the pretense of privacy often does is protect us from reality. It is called on to conceal the fact that there are two realities: the world as it is lived in by men, and the world of women, which has historically been exiled from political and philosophical consideration. It has been regarded as beneath such consideration, its truths narrowly and inescapably personal—rather than universal—and therefore inevitably trivial.

“I must express myself or lose myself or break,” Mary MacLane wrote.

Before she faded into obscurity, MacLane wrote, directed and starred in a short silent film, released in 1917, called Men Who Have Made Love to Me, which detailed with humor and great detail the different types of men she had encountered; no known copy of this film exists. It is believed to be the first film in which an actor directly addresses the camera and also the first whose director also starred in it. In 2010, my friend the playwright Normandy Sherwood recreated this film, using MacLane’s original script, as part of a play she wrote about MacLane. When I went to see it the audience laughed a lot at how seriously Mary (played by the hugely talented Juliana Francis-Kelly) took herself, but Francis-Kelly portrayed her so sincerely that she seemed to come alive.

After the show, after Francis-Kelly had come out for her curtain call and was walking around greeting friends still in costume, I had the bizarre impulse to go up to her and throw my arms around her, as I would if she’d really been Mary. I wanted to tell her that eventually she would be recognized. Mary, I wanted to say, you will be known as an early practitioner of an art-form that’s only now beginning to come into its own; women are finally making mainstream works of art that are not only valued as provocation but taken seriously as cultural forces. 1917 was too early; so, in some ways, was 2010. But I have high hopes for 2013, and beyond.

I didn’t do this, of course. But I’m saying it now, and if Mary MacLane’s hungry ghost can hear me, I hope she will be a little bit satisfied.

This excerpt is drawn from the introduction to I, Mary MacLane by Mary MacLane, to be published by Melville House on March 19.