Ernest Hemingway purportedly said of Dawn Powell that she was his “favorite living writer.” Powell’s reputation has dwindled since then, and so I picked up A Time to Be Born in an effort to read more women writers—especially once-famous, forgotten ones. It took me a long time to get around to reading it, though, mainly because the back cover blurbs and reviews I read didn’t do justice to the one thing that made me love this book: that Dawn Powell’s writing is so damn mean. She’s a Northern Flannery O’Connor.

A Time to Be Born takes place in New York City, in the world of journalism, in the months preceding the United States’s entry into World War II. Imagine being there: the outfits, the music, the atmosphere, the sense of foreboding, the knowledge that something big is going to happen, that we’re going to war.

Vicky Haven, a clever but self-conscious girl from Lakeville, Ohio, has had no luck in love so far. After her fiancé ran off to marry her business associate, Vicky is utterly dejected. Her best friend seeks out on her behalf the help of Amanda Keeler, a former school friend who made it big in New York—now known as Amanda Keeler Evans, after she married the biggest press mogul of the day. Amanda, who is said to be modeled after writer and politician Clare Booth Luce, is the archetype of the cold, beautiful, manipulative woman. This is why I love her. 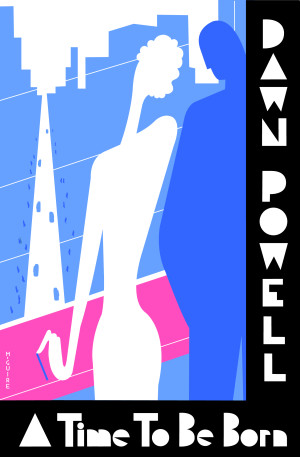 In many ways, Amanda is the ideal villainess. She doesn’t own up to her modest Ohio upbringing, inventing instead a sheltered education in Europe. She shuns physical contact—she doesn’t like sex, which allows her to use it. Her awareness of her beauty helps her barter for whatever she needs. She is so un-feminist (is that a word?) that she actively hates and despises other women, their weaknesses, their mannerisms: she thinks she is the exceptional woman, the special snowflake.

And yet, despite all of her faults, Dawn Powell still manages to make Amanda completely, frighteningly human. Amanda is a villain, sure, but the author makes her so true to life and brushes such a brilliant portrait that I understood every one of her actions. More than once I caught myself thinking “Okay, I could do that.”

And it is not just Amanda. Every single one of the characters, primary and secondary, has this in common with the others: none are likable. While unlikable, all are relatable. From the personal secretary who is sick of not getting her fair share of recognition, to the cynical, superficial bourgeois family obsessed with famous acquaintances—I understood them all. Some of them are horrible without even meaning any harm to anyone.

To me, Dawn Powell’s characters are as good as most from Balzac or Flaubert, without the annoying misogynistic, deterministic bullcrap. There, I said it. Powell does not have an agenda, such as proving that women are stupid by inventing a stupid character and pretending it was drawn only from observation. I found Powell’s writing style flawless: precise, never gushing. She shifts from one character’s point of view to the next seamlessly, allowing her well-constructed plot to slowly unfold. Some people have found A Time to Be Born funny, and I guess it is, in a laughing-to-keep-from-crying way. Others seem to be under the impression that Powell’s books are only a thinly veiled criticism of the famous New York writers of her time, but to me it is much more than that. Yes, they are timeless, but that’s not what I mean. They are also a study of the self-centeredness, the boundless selfishness of human beings, especially wealthy, famous ones—a study of the lengths people will go to, and the desperation they will fall into, when they are not able to think of anyone but themselves.

As I reread this last paragraph, I realize it looks dismal, but this book really isn’t. For one thing, I can always find reassurance for my own little ego: “But I am not like those characters. Not me.” This mantra is what allows me to read about awful people, feel awful for a while, and then go on with my life. For another, what shines through most in all this book’s bleakness is Dawn Powell’s genius. As an aspiring writer, I know I’ve found yet another great novelist to look up to.

This is part of an ongoing series, produced in partnership with Tumblr Storyboard, to highlight Tumblr writers (and the books they love). Want to have your essay considered? Submit it here. We’ll publish our favorites every Friday for the next five weeks.

Jade Marin is a graduate translation student from France. She loves reading, vegetarian cooking, and looking at pictures of fluffy animals online. She is currently in the (slow and painful) process of editing her first novel. Her tumblr is billowingclouds.tumblr.com. More from this author →