1. Don’t smile while they are exercising. This especially goes for when women are jogging. Many men over thirty (MOTs) do this move where they stop, turn, and—while watching a woman jog past them—smile for a seemingly inhuman amount of time. Please don’t do this. It’s creepy, and everyone knows what you’re doing. Also don’t start smiling when a woman is jogging toward you. She is looking intensely past you for a reason. This rule also applies at the gym. I don’t go to the gym, because I’ve given up on my body, but I have friends who tell me stories of men over thirty hitting on women under twenty-five at the gym. I imagine a balding man with shoulder-hair sprouts sweating profusely and leaning on a treadmill while a woman under twenty-five (WUTs), who has a graduate degree and a good job and a bright social life, is just trying to exercise. He’s smiling and talking to himself because she has headphones on. 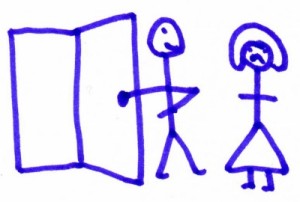 2) Don’t hold a door open for an absurd amount of time. This typically also involves a creepy smile. The long-door-hold seems to say, “I want to fuck you, look how nice I am, I’m just being a really nice guy is all.” This awkward interaction may last only ten or fifteen seconds, but it feels much longer. The long-door-hold is often followed by the ass-check-out, which is obvious and embarrassing. These types of MOTs wear khakis and order coffee drinks with whipped cream. If you’re going to hold a door open for a WUT and you’re a MOT, just don’t make eye contact, and please make sure you’re not holding the door open for any other reason than to be nice. Ask yourself, “Would I hold this door open for someone I don’t want to stick my penis inside?” You know what, maybe just don’t hold the door open at all. Most women have arms.

3) Don’t stare at a woman’s crotch like you’re going to beam into it. This one may seem obvious, but I’ve seen many MOTs do this, typically at a coffee shop or restaurant. The MOT is typically sitting down and starring at the crotches of the waitresses and other female customers who are conveniently at an eye-to-crotch level. MOTs who check out young asses are common in our society, but the crotch-gazer is a special breed of aging man. It seems aggressive in a murderous way. If you do this, please stop immediately. If you do this and sit near the bathroom to stare at female crotches as they leave it, my only hope is that you one day unknowingly crotch-watch your mother.

4) If you’re within ten feet of a WUT, don’t adjust your penis and testicles with your hand inside your pants pocket.

5) Don’t stand inches from a woman when there are several feet of space. Many MOTs are desperate and for some reason think close physical proximity will work in their favor, when in reality, it does the exact opposite. Just because you’re sitting at the bar doesn’t mean your feet have to be on her barstool, or worse, your knee touching her knee or leg. I’ve seen this too many times. It’s not only unbelievably aggressive, it’s gross. The only thing worse than a MOT hitting on a WUT is a drunk MOT hitting on a WUT while saying something like, “But your shoulders look so tight. Let me help.” You remind her of her Dad’s pervert friend, George or Bill or Frank.

6) Just don’t smile. This may seem like a ridiculous blanket statement, but I imagine the percentage of WUTs who want a MOT to smile at them is somewhere between 5 and 10.

Note: If you’re a MOT and you disagree with these suggestions, do the following: Walk into the bathroom and stand in front of the mirror. Look at yourself. Then smile and say, “Hello, ladies.” If you don’t feel like a creeper, good for you. It means you’re either Don Draper or Ryan Gosling.

Listen to Shane read his essay: