Episode 5 of Make/Work is the first of a sub-series where host Scott Pinkmountain interviews couples in which both partners are artists, addressing some of the unique issues that may arise in those relationships.

This week, Scott speaks with Emily Chenoweth and Jon Raymond. Chenoweth is the author of the novel Hello Goodbye, which was a finalist for the Oregon Book Award. She’s also a highly prolific ghostwriter. Jon Raymond has written The Half-Life, Rain Dragon, and the short story collection, Livability. His screenwriting credits include Wendy and Lucy, Meek’s Cutoff, the HBO miniseries Mildred Pierce, and several other films.

“I swear to god, if I didn’t have to figure out what was for dinner every night, I could write another novel…Somehow it’s this terrible existential crisis everyday at 4pm.” —Chenoweth 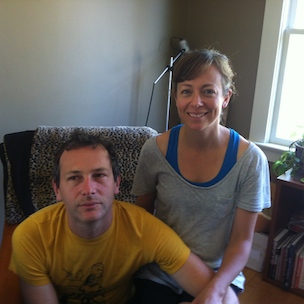 There have been times very recently where I was walking past a bank and saw a bunch of people sitting in their cubicles and was just consumed with jealousy and was just like, “Oh my god, if I only knew where I was supposed to go…” —Raymond