At the 86th meeting of the New York Comics and Picture-story Symposium, Gabrielle Bell discussed her life as a cartoonist and her recent work, while Jonathan W. Gray presented a talk titled, “Machine-Men: Race and Technology in American Superhero Comics.” Gabrielle Bell, born in England and raised in California, has been selected for the Best American Comics anthology on five occasions, and has been featured in publications such as The Guardian, McSweeney’s, Bookforum, and The Believer. She began her talk by discussing her first freelance assignment as a fifteen-year old: drawing a Rastafarian bear named Dready Bear for a friend of her father’s named Crazy Larry. Although Larry discouraged Bell, she continued to work, filling notebooks with writing and doodles.

Around this time, she discovered the work of Dan Clowes, Adrian Tomine, and Julie Doucet, and started her career as a cartoonist. Her dream was to produce work for the esteemed publisher Drawn and Quarterly, who worked with some of her favorite cartoonists. From about 1998 to 2002, Bell self-published several books whose titles began with “Book of…,” such as Book of Ordinary Things. Many of these were collected in When I’m Old and Other Stories, published by Alternative Comics in 2003. 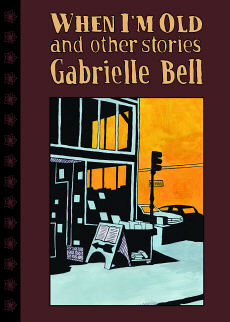 Soon, Adrian Tomine purchased one of her books and brought it to the Editor-in-Chief of Drawn and Quarterly, who suggested that Bell should use more clean and refined lines. Thus Bell began slowly working towards a more precise and simpler aesthetic, and as a result was taking weeks to do a single page. As a way of escaping this, she began a series of diary comics, which turned into her comic collection Lucky. Bell then met the filmmaker Michel Gondry, whose work she deeply admired. After Gondry learned that she was a cartoonist, he hired Bell to tutor his two young sons in the art of cartooning, which she continued doing twice a week over the course of two years.

At this time, she drew for the quarterly Mome, published by Fantagraphics. She began a torrential romantic relationship with Michel Gondry, and they began to collaborate artistically. She drew a comic about a girl that turns into a chair, which was adapted into a short film in Gondry’s collection Tokyo!. She and Gondry had ideas for several more collaborations, but these were ultimately disbanded because of their subsequent break-up. Luckily, Drawn and Quarterly finally published a collection of her stories, entitled Cecil and Jordan in New York.

Bell started a webcomic blog, which her friend, cartoonist and publisher Tom Kaczynski, turned into a minicomic. They later published it as a full-length book entitled The Voyeurs, with Kaczynski’s newly formed publishing house Uncivilized Books. Bell embarked upon a series of other cartooning projects, such as a comic for the Canadian fashion magazine Flare, and a cartoon adaptation of the poem “Green Verses” from Sasha Chernyi’s Poems from Children’s Island. She attempted to submit comics for consideration to the New Yorker several times, including one entitled “How to Make a Bell-Stand,” but they were ultimately rejected, regardless of the efforts of New Yorker art director Francoise Mouly.

Bell began feeling that she still hadn’t found her voice as a cartoonist, and moved to an idyllic town in upstate New York to concentrate on her craft. However, she encountered tremendous writer’s block and grew depressed. After the passing of Obamacare, Bell began seeing a therapist, who urged her to pay attention to the voice in her head—a “petty sycophantic windbag, constantly chattering.” Listening to this voice, which discouraged Bell for so many years, has been enormously helpful, and Bell started drawing one panel a day.

She continues drawing and pursuing the same dream she had as a teenager, although that much-hated voice continues chattering in her head. Her book Truth is Fragmentary, published by Uncivilized Books, will be released within the next few weeks. Moving into the arena of pop culture, in the second half of the Symposium Jonathan Gray discussed race and technology in American superhero comics—in particular, several cyborg characters from various comic book franchises, who are all un-coincidentally black.

Gray, an associate professor at John Jay College-CUNY, is the author of Civil Rights in the White Literary Imagination, has contributed articles on comics and culture to Entertainment Weekly and Salon, and is currently co-editing Feats of Clay: Disability and Graphic Narrative. Gray began his talk with a quote from Donna Haraway’s “The Cyborg Manifesto,” a groundbreaking essay published in 1991, which Gray claims “informs a great deal about what is to come.”

Gray then discussed the new iteration of the Justice League, in which a hero of color—the original Cyborg—becomes more robotic and less human than he previously seemed. A great deal more can be done to make the Justice League diverse, Gray claimed.

He noted that the general conceit in popular culture constructs blackness as alien. Thus black cyborgs such as Victor Stone (Cyborg), Michael Collins (Deathlok), or Misty Knight have a great deal of prominence in superhero comics.

Cyborgs also have an interesting history within the context of American politics. In 1974, when the original Deathlok first appeared, the U.S. had transitioned into having an all-volunteer army, and the general public was worried about how the government was going to get people to join. Within this historical framework, blackness became increasingly tied with machinic narratives. Gray then summarized the character history of the hero Cyborg, a member of the Teen Titans and currently also included in the Justice League. Cyborg, or Victor Stone, has trouble accepting society’s accolades due to his sense of alienation and dislocation. An outcast, Stone has difficulty reconciling his ethnic identity with his privileged upbringing and seemingly normal family existence. Gray emphasized that this story was developing contemporaneously with the popularity of Norman Lear shows such as “Good Times” and “The Jeffersons,” which strove to represent stable, middle-class black lives.

Next, Gray examined Deathlok, a once quite obscure character that is now one of the antagonists of “The Agents of S.H.I.E.L.D.” Deathlok, previously known as Michael Collins, was a profoundly ethical, hardworking family man who was killed by his boss, while his brain was harvested and placed into the body of a cyborg. Collins was able to take control of the cyborg body and turn the tables on his oppressors, choosing to bring them to justice rather than regaining his humanity. Relaunched in the 1990s by black comic book writer Dwayne McDuffie, Deathlok’s story becomes explicitly tied to black identity; a cover of one issue even uses the subheadline “The Souls of Cyber-Folk,” a clear riff on W.E.B. Du Bois. Last, Gray discussed Misty Knight, a superhero with a robotic arm, and a triple minority status: she’s black, a woman, and a cyborg. Based on Pam Grier’s Foxy Brown, Knight “passes” more for human than Cyborg or Deathlok, and is able to hide her cyborg arm within sleeves. Her character elicits less pathos than the other cyborgs—a fact which is perhaps tied to her gender, and a topic that Gray will continue to explore in his research. The lively Q & A that followed the talk dealt largely with possible inclusions for other cyborgs within this spectrum, the relation between cyborg narratives and disability (especially the figure of the freak), post-human narratives, and the possibility of cyborg existence as a metaphor for whiteness. In addition, Gray also explained his research on Obama in comic books, detailing that although earlier comic books almost never included representations of the current president, this abruptly changed with Obama’s presidency, and as a result he is now regularly included in superhero comic books.

Gray plans to continue his work on race, gender, and superhero comics, and hopes to write an analysis of “The Walking Dead.”

2. Gabrielle Bell, When I’m Old and Other Stories, Alternative Comics, 2003

14. Misty Knight, artwork from the interior of Daughters of the Dragon #1. Art by Khari Evans.