Twilight is when Don Niemyer begins to seek out the place where his family will sleep for the night. He snuggles his girls safely into bed, then takes the helm of his 21-ft. RV and searches for a stretch of curb on one of Portland’s city streets. He looks for a spot where he can park without being noticed; he always pulls in after dark and leaves before dawn, and never goes back to the same spot more than once every two weeks. This is important because he is breaking the law.

Technically, his family is homeless. But the Niemyers are urban nomads by choice. If you didn’t know they lived in an RV, you’d never guess it. They are the hard-working owners of two small businesses, a successful coffee shop and doula practice.

I met Don at a coffee convention a few months after the family moved in. We were talking about how to steam milk properly, I think. He mentioned the RV so casually I almost didn’t catch it at first. But I went home obsessed with the idea—how could a family of four live in such a small space? Why would they choose to? What did the girls think about it? How much intimacy is enough, or too much? Isn’t it a little gross driving around with your family’s human waste riding under you?

Don is slim and clean-cut. He carries himself with some of the stiffness of his childhood in the Pentecostal Holiness Church, and some of the looseness of rebelling against it. Carissa is a freer spirit, with a mellowness that complements Don’s frenetic attentiveness. She has long brown hair and sits with her knees pretzeled up under her in various configurations. When they met she was a Texas pacifist and he was an Oklahoma redneck, according to Don. He had never met anyone like her.

The Niemyers’s experiment is part family adventure, part exercise in extreme minimalism, and part matter of convenience. In 2010, they decided they wanted to be closer to extended family. They planned to sell the coffee shop and take a six-month family road trip on their way from Portland, Oregon to Fort Collins, Colorado. Habitable four-person accommodations were necessary, so Don Googled “smallest RV with a shower” and came up with the Winnebago Rialta QD. In just over 134 square feet of living space it sleeps four and seats seven and has a stove, sink, fridge—and shower. This is not the RV you might be picturing. It does not have double slide-out floors and walls separating the master bedroom from everything else. It is less than half the size of those behemoths, closer in size to a cargo van than a tour bus. The brochure proudly states,

“Perhaps the greatest asset of the Rialta is its uncanny use of space.” After spending time in one, I have to agree. The Niemyers spent a year looking for one on Craigslist. They bought it on March 25, 2011, and slept in it that night in it to see what it was like. They gave notice on their apartment the next day.

To take up life in the RV, the first thing they had to do was dispossess themselves of nearly everything they owned, which was more than they realized. “Things have a way of filling your life,” says Don, “especially in this country. Stuff comes to you so easily.” In the end, what they got rid of was mostly clutter. Here’s what they kept: Roughly 20 articles of clothing apiece, including sweaters, t-shirts, pants, socks and underwear. A small basket of art supplies for the girls, and a doll for each of them. Four sleeping bags. Some books and a laptop. One pan and one pot, a knife, a grater, and a peeler.

If life inside the Rialta were a video game it would be Tetris, and the Niemyers would be winning. The bathroom is not large enough to stand in unless the front wall is pulled out, accordion like, into the foyer. The foyer is also the mudroom. The mudroom is also the kitchen. The kitchen is part of the dining room. To chop onions and carrots for dinner, you must unfold an inadequate 8-inch counter that almost touches the bedroom closet. The bedroom closet contains everyone’s clothes, and it is really, really small by American standards, maybe 6 cubic feet. In the morning and evening, the master bedroom is the dining room. If guests are over, the table folds down and the dining room becomes the living room. And that is only the half of it, a mere 70-odd square feet. Take one step toward the cab, and you are in the back seat, the girls’ bedroom, the den, and the playroom. In its latter capacity it has been a fort, a store, and an enchanted forest, among other things.

The Niemyers were elated at the prospect of trading in their old life for a temporarily more adventurous new one. It wasn’t just that it sounded so fun; it was also a matter of aligning their values with their lifestyle. Going minimal was one way of living in line with a cobbled together set of beliefs that hinge on stewardship, and to show the girls that success and contentedness are not dependent on owning lots of stuff. “In a house, you flick on the water and can let it run and run and run,” says Don. “We can’t do that. We only have a 20-gallon tank. I hope these little things work their way into the girls’ minds.”

Primarily, though, Don and Carissa saw it as a way to spend more time together. The modern American home is built around the notion of privacy. The basic organizing principle of the single-family home is separation—private space from common space, and each person with 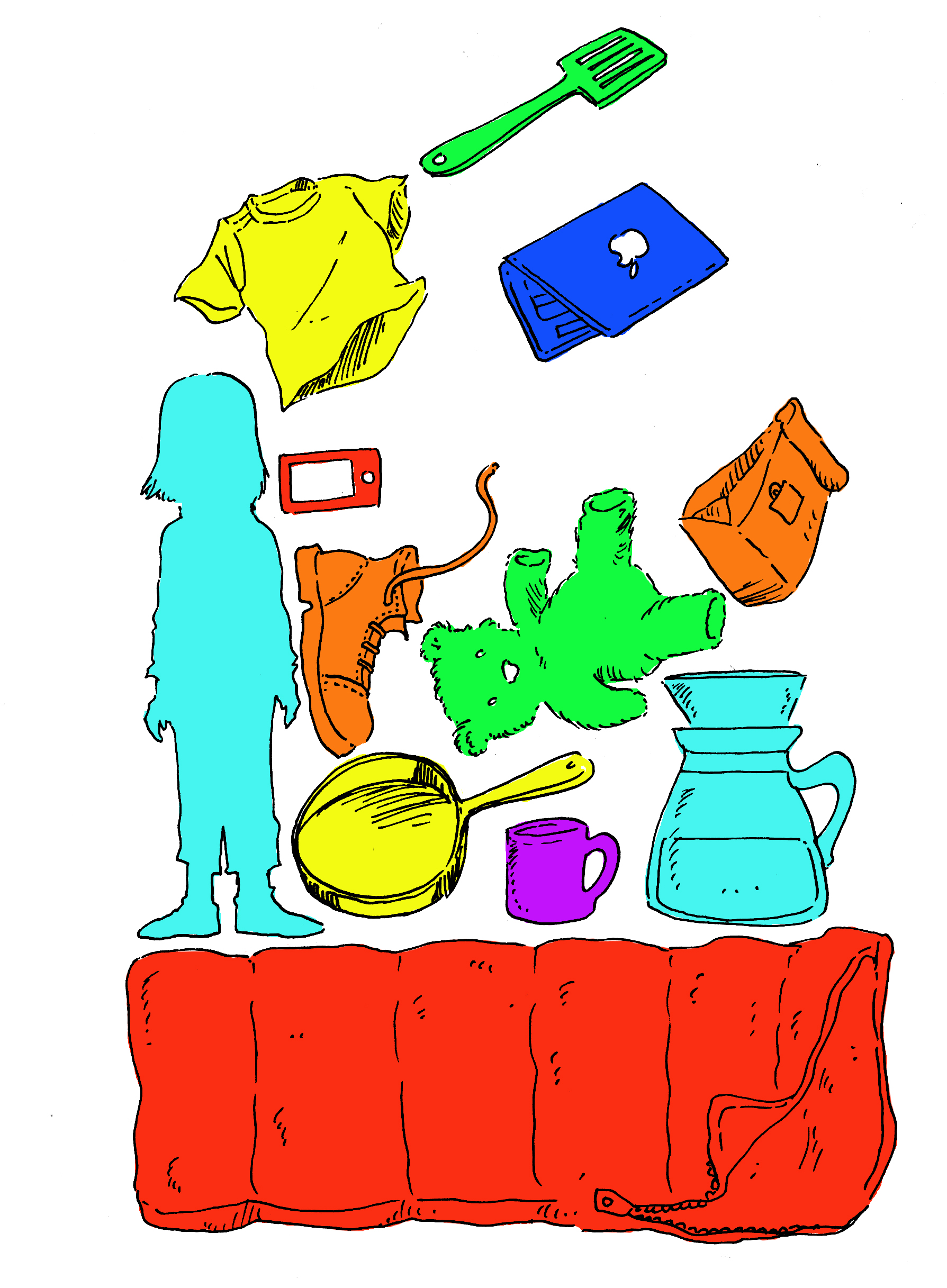 their own bedroom in either in a wing or a separate floor of the house. Not since the seventeenth century have well-off parents and children shared sleeping quarters past early childhood. The architecture of partition extends also to the things our rooms are filled with—gadgets like televisions, computers, smart phones—that ensure we are largely alone even when we are together. Living in an RV, the Niemyers reasoned, would force them to spend time as a family. There are no bedrooms to retreat to. There are not even doors.

Parked out of sight on a city street, the only profound thing is how normal and boring life inside the RV is: making dinner, doing chores and homework, and curling up together to hear made-up stories before bed. Don typically rises early, before the girls and Carissa are awake. He squats in the kitchen and grinds his coffee with a hand-crank grinder as quietly as he can while the water boils. He dresses quickly. When he leaves, he cracks the door slightly and peers out, checking to be sure no one is looking. By the time Carissa and the girls wake up, he is gone and only the smell of freshly brewed coffee remains. Carissa gets the girls fed and dressed for school.

In the evening, Don begins the process of what he calls “working the matrix”’—finding the perfect parking spot for the family to sleep in that night, usually near a park. While he and the girls swing on monkey bars, Carissa cooks a one-pot dinner. If the weather’s nice, she brings a blanket out to the playground and they have a picnic while the sun edges its way down for the night.

Though the girls’ teachers and many of their friends and friends’ parents know how they live, the family doesn’t like to draw attention to it. “I’ll tell anyone I live in an RV,” says Niemyer, “but I want to control the story.”

He assumes others have internalized stereotypes about people who live in RVs and he prefers not to confirm them. Since meeting the Niemyers, I have begun to notice RVs on Portland’s city streets, especially ones parked in the kinds of spots they favor—near parks or schools, in the shade, away from homes or businesses. I was shocked at how many I suddenly saw when I changed the way I was looking. Some stand out more than others, like the huge blue bus, hand-painted with flowers. Or the broken-down fifth wheel with holes in the screens and a slightly funky odor. My eyes glide more easily over the well-kept vehicles. I began to understand Don’s obsession with maintaining anonymity as a basic paternal drive to protect his family. As long as they aren’t noticed, they can keep on living the life they want.

On summer nights, light lingers into bedtime. Don strings up a curtain behind the front seat, becoming a silhouette. He climbs into bed with the girls, and cradles the youngest, who is working her way through the remains of an exhausted, pre-bedtime meltdown and begins his nightly story time ritual. Carissa and I, only six feet away in the living room, might as well be in another universe.

“There are eighty Stripeys at the ball,” Don says in a hushed voice. The girls giggle and squeal and rustle in their striped sleeping bags, the inspiration for the made-up creatures. Stripeys don’t have legs, so they flop around like cooked spaghetti. It makes it hard for them to dance. The youngest asks, “Daddy, were you there, at the ball? Did you meet the queen?” By the time the story is over, it’s twilight. I can just make out the outline of the older daughter lying on Don’s stomach, her head resting on his shoulder. Very quietly, they are singing a lullaby together.

When they are done, Don gets up and crosses the invisible chasm—only three feet wide—between Planet Bedtime and Planet Adult Conversation. We talk, and the girls wriggle themselves to sleep. When it’s fully dark, Don pulls the curtains so no one can see in. He peers out to get a sense of what’s happening outside, what threats might lurk. I, on the other hand, feel entirely safe. We might as well be in an airplane I feel so far from Earth.

When the adults begin yawning, Don decides it’s time to drop me home and find a safe place to sleep for the night, where this intimacy can be preserved. He leaves Carissa and I in the back and takes the captain’s chair. The RV shudders quietly as it starts and we pull away from the curb. It’s surreal, gliding through city streets in the dark, children slumbering next to us, no one aware we’re all inside. When they disgorge me from the back of the vehicle, I have no idea where I am at first. It takes me a minute to get oriented and point myself in the direction of home.

The Niemyers have lived in the RV for over a year now. A year of operating a family and two businesses from a roving house. A year of breaking the city’s curb laws every night. A year of hiding in plain view. When the girls awake in the morning, they won’t know where they are at first. They will be technically lost but completely at home.

Note: After two years, the Niemyers finally sold their coffee shop and left Portland. They are now traveling the country in their RV. Don blogs about the experience at donniemyer.com/were-doing-this.

By day, Hanna is the managing editor of Democracy & Education, a scholarly journal about two things she thinks are important. It is published by the Lewis & Clark Graduate School of Education and Counseling, where she is director of communications. She is also the author of Left Coast Roast, a guidebook to artisan and influential coffee roasters on the West Coast, and The Craft of Espresso. Her writing about coffee, food, and life has appeared in publications including The Art of Eating, The Sun, Travel + Leisure, and Portland Monthly among others. Hanna lives in Portland, Oregon, where there is plenty of good coffee. More from this author →