This is the story of two authors making a trip they did not make to Braggsville, Georgia, a place that cannot be found on a map, but is there nonetheless. Braggsville is also other places: Ferguson, Cleveland, New York. Turn on your television or open your textbooks; Braggsville is there too. You may be there now.

Geronimo Johnson and I have two things in common: we share the same publishing imprint, and we share a connection to the Georgia town that is the focus of his new book, Welcome to Braggsville (William Morrow/HarperCollins). The book is about D’ron Davenport, a white Braggsville native and sophomore at UC Berkeley who, along with three college classmates, staged a mock lynching during Braggsville’s annual Pride Week Patriot Days Festival, which culminates in a Civil War reenactment. The group of students, who’d dubbed themselves “The 4 Little Indians,” hoped their particular brand of social protest would call attention to what they viewed as the romanticizing of the South’s racist history, but the results were catastrophic. In early January, a month before the release of Welcome to Braggsville, Johnson and I decided to see how the town had been affected by the “Incident at Braggsville” and the national outcry that followed it.

I landed at the Atlanta airport and picked up the rental car before meeting Johnson outside baggage claim. He was just as he’d described himself over the phone: an African American male in jeans, sneakers, and an orange sweater beneath a blue down parka. I climbed from the car and extended my hand in greeting, but Johnson just stood there staring at the rental.

I stepped onto the curb and turned to look at the car. A turquoise, two-door Ford Festiva.

“This is what they gave me.”

He sighed, shook my hand, and told me to call him Nimo.

We left Atlanta and followed I-75 south toward the middle of the state. Nimo looked out the window as the city’s urban sprawl waned to rural landscape.

“Atlanta’s still considered the heavenly kingdom,” he said. “The city on the hill. It appears the world’s been inverted because there are so many black people in power, and in Braggsville there are zero black people in power.”

“The cities aren’t that far apart,” I said. “Why the disconnect?”

“When my father was a kid growing up in Braggsville, he’d tell people he wanted to go to college to become a doctor or a lawyer or a scientist, and people would tease him and say, ‘This isn’t Atlanta.’

“Atlanta benefited by being the seat of so many civil rights initiatives,” he said, “and that never made it way down to Braggsville. The people who went to Atlanta for sit-ins and demonstrations, their mode of activism was to help people get out and go to Atlanta, which was considered the North, as opposed to trying to change anything in Braggsville. Braggsville’s social structures were considered intractable.

“But my father got out,” he said. “Now, every time I return to Braggsville I feel like an outsider.”

“I’ve never even visited,” I said. “And my grandfather left in the ’40s. I’m the consummate outsider.”

Nimo looked over at me and smiled, his eyes taking in my flannel shirt, blue jeans, boots, and corduroy jacket.

“You’ll be fine,” he said. “You look just like Braggsville.”

My grandfather was born and raised in the white section of Braggsville not far from where D’ron Davenport’s family still lives. Like Davenport’s father, my grandfather worked at the Kenny Hot Air Factory, Braggsville’s largest employer and an institution that keeps the races segregated in the same way the town keeps the communities segregated. Nimo’s father was born and raised in the Gully, an African American community named for the Gullah language that was spoken by ex-slaves along the southeastern coast for generations.

Our first stop in Braggsville was for lunch at the Waffle House, where the 4 Little Indians met the morning of the reenactment, and where they got into an argument that altered both their plans and lives forever.

“You mind if we park the Festiva around the corner?” Nimo asked.

Once inside, we took a booth by the counter and studied our menus. A smiling waitress approached our table, her graying blonde hair pulled back in a neat bun.

“Y’all the ones driving that neon blue car?” she asked.

We told her our families are from Braggsville, and we planned to spend the day visiting old haunts. The waitress had known some of my grandfather’s people, all of whom are now dead. As word spread through the restaurant, one of the cooks came out and introduced himself to Nimo. He’d grown up in the Gully and had gone to high school with Nimo’s father.

During lunch our conversation focused on Braggsville’s upcoming Pride Week Patriot Days Festival and the Civil War reenactment that would highlight it, but our talk soon turned to the recent string of African American males who’d been killed by police officers—Michael Brown, Eric Garner, Tamir Rice—and I suggested that these tragedies almost feel like reenactments of America’s history of racism.

“In a way, they are ritual reenactments,” Nimo said. He uncapped a bottle of Texas Pete and dumped it on his smothered, covered, chunked, and chopped hash browns. “Something is ritualistic about these events because they’re so similar and the results are similar, and the initial contacts are similar in that they’re framed by fear. It seems like a reign of terror in the way the Mayan rituals kept everyone appeased and confident and certain that the social order and the conflict order were steady. But it also feels a little Sisyphean. We think we’re getting somewhere, and then a kid is shot.”

“You started writing about the tragedy here in Braggsville long before these more recent deaths occurred,” I said. “What interested you in the story of these kids from Berkeley?”

“Honestly, when my father told me about the mock lynching I thought it was a joke, and I laughed hysterically. But then he said something that made me think: We’re talking about a situation where it’s so dangerous to be a black male that even pretending to be one can get you lynched. Somehow, if this had actually happened to a black male instead of some college kid, I would’ve found it less compelling. People would be shocked, but then we’d forget about it in a couple of weeks.”

After lunch, we headed over to Lou Davis’s Cash-n-Carry Bait Shop and Copy Center for a couple of pickled eggs.

The store, a longtime Braggsville landmark, made national news after it was discovered that one of Davenport’s classmates had tweeted several slogans found on bumper stickers that are for sale in Lou’s: IF I’D KNOWN IT WOULD BE LIKE THIS, I WOULD HAVE PICKED MY OWN COTTON; I DON’T LIKE HIS WHITE HALF EITHER; and GUNS DON’T KILL PEOPLE, DANGEROUS MINORITIES DO were viewed as the purposefully incendiary statements of the provocative youths, with most people around the nation never knowing the stickers could still be found for sale at Braggsville’s best-known local retailer.

We were scheduled to have dinner at Nimo’s grandparents’ house in the Gully that evening (“Fried turkey,” he’d said. “You’re going to love it.”), but first we wanted to visit the park where the annual Civil War reenactment is held and where a group of re-enactors had stumbled upon the staged lynching that made international headlines and marked Braggsville as the center of America’s debate on race and violence.

On the way to the park we drove along the town’s perimeter, circling the huge tract of forested land known as “The Holler,” white Braggsville on one side and the Gully on the other. According to Nimo, Bragg, a Confederate veteran who founded the town, purposefully left the land undeveloped to provide a barrier between the races.

“But if you ask white residents they’ll say it’s federal land,” he said. “People in the Gully will tell you Bragg still owns it. Then there are a few people on both sides who would say no one owns it, and that’s the problem.”

We left the Festiva in the parking lot at the recreation area, and we set off down the hill toward the giant Poplar, planted by Bragg himself to commemorate his 1864 speech on Southern freedom, the tree where the students’ plans had taken a disastrous turn.

We stood there in silence as if waiting for the missing tree to spring from the earth at any moment like Jack’s mythical beanstalk. The sun was sinking behind a stand of pines, and 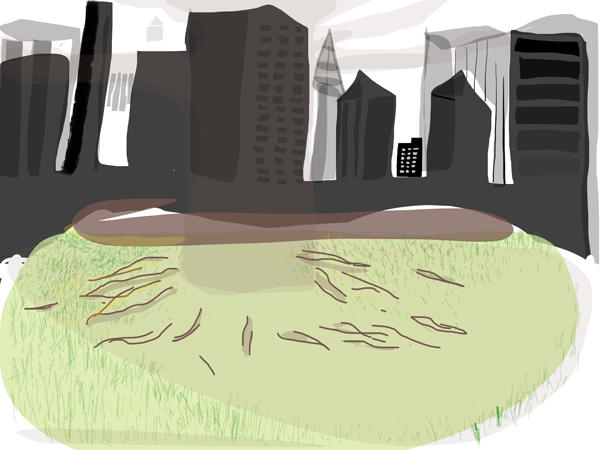 the air grew colder as the light slowly faded.

On the way back to the car, we stumbled upon a spot in the park where the grass was a little thin. Nimo knelt and ran his palms over the ground.

“It feels veiny,” he said. “This must have been the place, but they cut down the tree. They even removed the stump.”

He stood, and the two of us stared at the mottled earth, the depressions so slight that we would’ve walked past the spot if Nimo had not been looking for it.

The tree, like history, was no longer there, but that didn’t mean we couldn’t feel it just the same.