A lot of people think this is my first guitar, but to set the record straight, my first guitar was this all-black Yamaha shredder—a crazy metal guy rig. I also had a cheap Strat, and after I’d finished my first year of guitar lessons my mom bought me a really fancy Telecaster. At first I was like, “Yeah!” but then I started going out to see bands in my hometown of Edmonton and all of these guys were playing really shitty guitars. I mean real hunks of crap! But they sounded cool, and I was like, “Oh, I gotta get me one of those!”

So I went to this place called Lillo’s. It’s a music store, but also half like a pawn shop. It’s weird, and old, and disorganized. It’s the kind of place where if you bug them enough they’ll go through the basement and find what you’re looking for. They brought me something perfectly crappy. As soon as I played this guitar, I was like “Wow, this thing is actually a piece of shit!” They were like, “Thirty bucks?” And I was like, “Sure.” 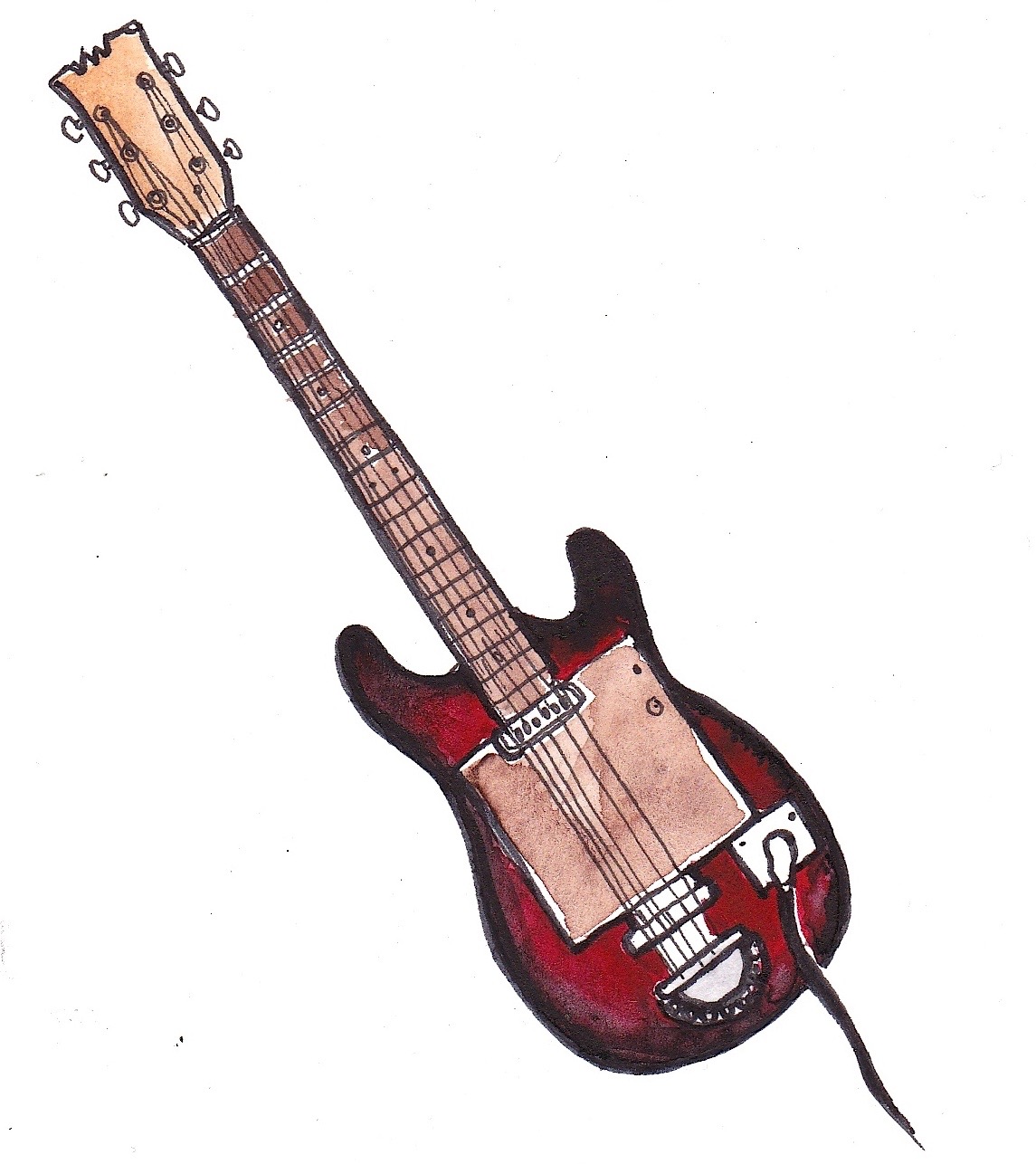 Guitar was my first instrument. I come from a musical family and they wanted me to play piano, and take singing lessons, but whenever they pushed me I was like, nah. So guitar came through my friends in junior high school, and then I took lessons for maybe a year or a year and a half at the conservatory of music in Alberta. It was a fancy place to go and the lessons cost a whack load of money, but the guy who taught me was a great instructor, and the style was contemporary, and after he showed me a few things he asked me what I wanted to learn.

At the time I was into “dad rock” old school stuff—the same stuff a guitar teacher would be into—so we went together well. But after a while he tried to turn me into a fusion jazz guitarist with tapping and stuff and I was not really a huge fan of that style. At that point I loved AC/DC and Van Halen, and then it turned into Eric Clapton and John Mayall and the Blues Breakers. Now I find this stuff really funny but at the time I thought if you wanted to be a guitarist you had to play like other people.

By the time I got that guitar at Lillo’s I had a better sense of what I actually wanted to do. But man the neck was huge. It was like playing a baseball bat! And the frets were dead and buzzing and it sounded God awful unless I played it really, really hard. I took a nail file and tried to fix all the frets to get it a playable level, but I never really knew what to do with the action. It took a long time to get it to where I wanted it to be.

But after a few years the neck finally did wear in, and the pickup was great. I’ve never really found another guitar that sounds the same way. If you play it clean and soft it has a very specific tone and if you hit it really hard it sounds completely different. When I moved to Vancouver I recorded an EP with that guitar as Makeout Videotape. And from that point on, the guitar became special to me, even though it was always hard to play, and could never stay in tune, and always had broken strings. What can I say? It had a magic sound so I had to keep on playing it.

I was about eighteen when that became my “signature” guitar, and I then I sold all of my other guitars including the really nice one my mom bought me. I took the special shitty guitar with me to Montreal, kept on playing it, and eventually people started noticing it and asking me about it. Then kids started posting pictures and questions on the Internet. Since it doesn’t look generic, people had all kinds of opinions and ideas about what it was. It was kind of nice to have something no one else had, something you couldn’t just pick up at any old big box store. That said, I didn’t always treat it well. I remember playing shows in Montreal where I would just chuck it across the stage and shit. At one point I snapped the neck and had to put a new one on. Then I broke the pick guard and had to replace that too. At this point everything about it has been replaced and it doesn’t really feel or play the same way. I don’t think I can keep repairing it either. I went in recently to fix the pickup but I saw that the magnets inside had broken into five or six little pieces.

I don’t even play that guitar onstage anymore because it breaks so often. I now mostly play a Strat at my shows, but it’s ironic. With the old guitar I could switch out a string pretty quickly or just play power chords for the rest of the song! But when something goes on the Strat it’s like the whole thing goes out. I suppose I could go out looking for another cheap guitar but I don’t have the patience anymore to wear one in. At the same time, I can’t part with the old guitar completely because I know I can’t replace it.

People have asked me about my love for other objects before. For example, I once wrote a song about Viceroy cigarettes. But I’m not sentimental about them. I mean it was kind of like a joke because where I’m from Viceroys are considered the cheapest, crappiest cigarette you can buy. People in Canada heard the song and were like, “Oh, very funny, Mac.” But people in the States and other places were like, “Oooh, cool!” and some people even came up to me after my shows and told me they started ordering them on eBay because they’re not available in the US. I could probably make a lot of money if I sold them at my merch table but I’d get a lot of shit for it too. To tell the truth, I do sometimes smoke Viceroys if I’m in Canada but to me a cigarette is a cigarette. The song will probably stay with me forever, but the smoke is gone in minutes.

There’s only one non-musical thing I’m into almost as much as my music gear, and that’s pinball. That started when I was living in Montreal and I’d go back to Vancouver to hang out with my old friends who’d all gotten into playing. When I moved to New York, I didn’t really know anyone at first and I had a lot of time on my hands, so I would go to Sunshine Laundromat and play their machines all day. A few years ago I bought my own machine so I could play at home. It was a Shadow—that’s a 1994 table by Bally. That may not mean much to non-pinball player, but to players it matters a lot. They knew which machines are good: like the Addams Family, Theatre of Magic, the Sopranos, and the Shadow. There are maybe twenty or thirty machines out there that are common but good and also a whole other bunch of oddball machines that are so intense. You’re not just knocking a ball around with a good machine—every table is unique and has a different feel, kind of like guitars, God bless ‘em.

When I got my Shadow I lived in a house with ten or fifteen people and it got played a lot. I used to be good about opening it up, cleaning it out, replacing parts, basically getting into being a pinball service guy. Taking care of these things is like a niche for middle-aged men in America. I could see myself getting to that point, but for now I’d rather play on someone else’s immaculately kept machine. I can see where people might think I’m into tinkering but the truth is I do it only out of necessity.

That’s also true about the old music gear I use—not just the “signature” guitar, but also my old synthesizer, drum machine, and tape recorder. These things break often so I have to figure out how to fix them. I guess I could pull these sounds out of a computer or something but this old gear sounds better to me than any plug-in or VST. You can spend like two days trying to make a computer sound like tape or you can use tape. It sounds great right off the bat, and if I have to fix the machine to get that sound it’s worth it to me. My grandmother once gave me an old amp, a Fender Vibro-Champ, which I’ve used to record all of the guitar parts on every one of my albums. She taught at the same music conservatory where I took my guitar lessons, and she used this amp with her student to teach them micing techniques. When she first offered it to me, I was like, “Wait! There’s no distortion switch? No reverb?” But it’s the best sounding amp I ever played through and I’ve come to appreciate it so much.

I’m not nostalgic for any of this stuff—I wasn’t even born when a lot of it came out. But it’s an organic feel I’m after and so I’ve taught myself how to work with it, how to deal with its quirks, how to get it to give me the sounds I want. I’m not trying to go for “top of the charts” but I am trying to put my personality into my music in some way. What I want/need/love most is the stuff that musically lets me be me.

Canadian multi-instrumentalist and singer-songwriter Macbriare Samuel Lanyon “Mac” DeMarco (born Vernor Winfield Macbriare Smith IV) began his musical career shortly after high school, leaving Edmonton in 2008 for Vancouver, where he self-released music under the moniker “Makeout Videotape.” Joined by fellow musicians Alex Calder and Jen Clement, Makeout Videotape was signed to Unfamiliar Records, but DeMarco decided to go solo, moving to Montreal in 2011. While supporting himself with odd jobs such as working on a road paving crew and participating as a medical research subject, DeMarco released a 4-song EP that captured the interest of Brooklyn indie label Captured Tracks. Since signing with the label, DeMarco has recorded prolifically, putting out several acclaimed full-length albums, EPs, and a special sold-out release series where subscribers received two exclusive 7″ records every six to eight weeks. Pitchfork has twice given DeMarco’s albums its “Best New Music” designation, and his latest release, Another One, came out on August 7th. He’s currently on a world tour.