“I needed to go far enough back that there would be nothing else waiting behind,” Howard Axelrod writes in his gripping new memoir, The Point of Vanishing. “No further layer that was just a scrim, no more version of reality that was only provisional. I had to touch the hard edge of reality, and begin from there.”

A life-altering accident sets a young man on an odyssey of exile and self-discovery. His travels take him from Harvard to Milan to a series of restless cross-country road trips, and finally, to a two-year span of solitary living in a quirky, imperfectly weatherized house at the end of a long dirt road in the most remote part of Vermont. No aimless walkabout, Axelrod’s journey has a clear purpose: to help him understand how a wounded, idealistic, excruciatingly sensitive young man can come to terms with a society with which he finds himself painfully at odds. The task is ambitious and almost unimaginably difficult: not only to understand his own soul, but to teach himself how to see the unadorned, pared-down face of the world as it truly is. The passionate sincerity of the young Axelrod’s desire is compelling. Here he is, for example, shortly after arriving at his wilderness hermitage, trying to improve his metaphysical vision with the close observation of a snail:

There was so little to see. I tried again. But the snail was barely moving. And I kept hitting some barrier—like the day, or just my brain, wouldn’t let me drop below a certain speed of seeing.

But he keeps trying, and one can’t help rooting for him. Axelrod is a master of metaphor, presenting familiar sights and sounds in unforgettable new ways. His writing is propulsive, unabashedly visionary, and strikingly fresh. This book will have you turning down pages, returning to sentences just to savor them, and reading passages aloud to anyone who will listen. Here, for example, Axelrod contemplates a sky full of stars in Vermont’s Northeast Kingdom:

The few stars in Boston, I realized now, had been like worn-out horses back in their stalls. Their quiet snuffling in the dark, their unassuming beauty, so much greater than the use to which they’d been put. But here the stars ran wild. With the overwhelming profusion of them, with the visible sweep of the Milky Way, it seemed there were more stars than sky. Time was everywhere. Not minutes and hours, not days and weeks, but seasons, centuries, millennia. Time was so much bigger in wild places. 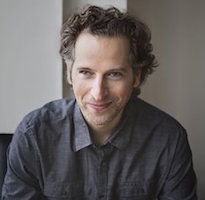 And here he is describing the advent of summer after a long, snowed-in winter:

The green was a revelation, a prodigal son—a color that had once existed, gone missing in the snows, and miraculously returned. It opened itself through the hazed meadows, through the blue-green hills, through the reflections in the pewter-green ponds; it deepened the blue in the pines, gilded the light off the streams, and relented only towards dusk yielding to the slow antics of the fireflies, to the stars overhead, to flashes that felt like after-shimmers of the green, green days.

These passages stand on their own, but in the context of the book’s underlying shape they accumulate meaning symphonically. In light of the protagonist’s struggle, they are harbingers of surprising revelations about the deeper truths that surround us all.

The Point of Vanishing is a profoundly immersive narrative. One is struck again and again by the quality of the writing: by the vividness of its characters, by the accomplished lyricism of its language, by the brilliant acuity of its observations, and by the wisdom and humor that permeate its pages. What lingers most of all are Axelrod’s sharply wrought landscape descriptions. Setting is definitely an active character in this story. The natural world has its own volition, its own cold-hearted poetry, and an essential burden of wisdom to impart:

Winter wasn’t shy. It didn’t care that I’d been away. Before my trip, the snow had just been learning the shape of things—lining the black branches of the apple trees in the meadow, tracing the circular grain on top of the fenceposts, as though uncovering map after map of some distant world. But now the snow knew where to fall. It wasn’t overzealous, but it kept coming. And I didn’t resist the seduction, the welcome home.

This memoir feels like a gift in a way that few books do. Reading it, one accompanies Axelrod on a harrowing journey to the stripped-down essence of the human spirit, right up to the actual point of vanishing.

The point of vanishing is to discover a brand new way of seeing the world, really seeing it, as if for the first time. Axelrod has a crucial lesson to impart: solace and meaning and wholeness are to be found in nature, in our own individual, sustained, and imaginative interaction with the physical world. This is where we need to look, in the frenetic and relentlessly plugged-in 21st century, for the parts of our spirit that have gone missing.

This revelation may put The Point of Vanishing less in the tradition of Into the Wild, as the back cover of my reviewers’ copy proclaims, and more in the tradition of American classics of spiritual redemption such as Walden and Black Elk Speaks. If you read it with an open heart, it has the power to change your life.

Tim Weed’s debut novel, Will Poole’s Island (Namelos, 2014), was named one of Bank Street College of Education’s Best Books of the Year. His short fiction and essays have won Writer’s Digest Popular Fiction and Solas Best Travel Writing awards, and have appeared or are forthcoming in Colorado Review, Gulf Coast, Saranac Review, Bloom, Talking Points Memo, Writer's Chronicle, Backcountry, and many other reviews and magazines. Tim teaches at Grub Street in Boston and in the MFA Writing program at Western Connecticut State University, and serves as a featured expert for National Geographic Expeditions in Cuba, Spain, and Patagonia. Read more at timweed.net. More from this author →