Memoirs of a Polar Bear is one of those books where I wonder if the summary on the back takes something away from the reading experience. I imagine picking up this book, seeing the title, and wondering why the main character’s life is compared to a polar bear’s. Do they both take winter river swims? Is it a comparison between the dwindling ice caps and an emotional state? Or is it just a general metaphor for feeling out of place among the human species?

Then the hypothetical reader gets into the first paragraph on the first page and realizes this isn’t a metaphor at all. This book actually is the story of three generations of a polar bear family, taking place in both the Soviet Union and Germany (before and after the fall of the Berlin Wall). And right away, Japanese-German author Yoko Tawada uses this fantastic conceit to deliver provocative contrasts.

When the grandmother polar bear (the first narrator) begins to write her memoirs, she labors painfully over the beginning, a description of being trained to walk on two legs. While she doesn’t call attention to the connection between the first performative steps as a trained circus spectacle and the act of writing a private life for the public, by putting them side-by-side in the prose, Tawada highlights it for us. Brilliant little lines illuminate how a literary bear’s mind might work, like when the grandmother bear is aghast at someone abstaining from sweets, saying, “What would I use as a metaphor for the best part of my life if there were no longer any sweets?”

Memoirs of a Polar Bear does not fully explore a world in which bears are producing literary work. The ways in which the bears communicate with humans is inconsistent throughout the novel, and while the details of such an arrangement are obviously not the point of the text, this lack of specificity is occasionally frustrating. Tawada makes connections between the place of polar bears in this world and the place of the oppressed minority in the real world, but those connections don’t feel fully realized. The bears are kept as entertainment in zoos and circuses (where whips are still employed), transported in cages, and exploited by their managers and their publishers; simultaneously, people are in awe of them and their life stories are celebrated. There is some mention of the polar bears’ rights, though that fades as the story moves along. The bears serve as critics of deceit—complete with the ability to smell lies—and proponents of emotional simplicity. As the story goes on and we move through generations, the bears lose agency, and this is a central theme of the book. But it’s unclear how the loss of agency fits with the metaphor of bears as oppressed minorities, or with the passage of time from a pre- to post-Soviet world. 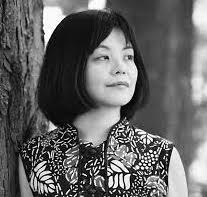 The glossing over does provide some humor, though. A bear is sold to a zoo and buys a computer in the same page. In explaining how she went from a circus performer to a regular conference speaker, the grandmother tells us:

I fell in love with the South American style of dancing and wanted to master it and incorporate it into my repertoire. I had them give me a crash course in Latin American dancing and rehearsed assiduously. Too assiduously. After hours and days spent vigorously shaking my hips, my knees were in such bad shape that I was incapable of performing acrobatics of any sort. I was unfit for circus work. Ordinarily they would have just shot me, but I got lucky and was assigned a desk job in the circus’s administrative offices.

The grandmother bear is able to speak with humans. Her daughter, Tosca, appears to only be able to communicate in dreams, although she works with other circus-performing bears who are in a union, which implies an ability to communicate. By the third generation, Tosca’s son Knut has been reduced to the behavior we expect from a realistic polar bear, but his inner monologue is still rich, and he is capable of reading. If the reference to a polar bear named Knut rings a bell, it’s because he’s based on the real-life Knut, famed resident of the Berlin zoo, and the last section of the book draws heavily on his life.

Tawada’s prose (translated from the German by Susan Bernofsky) moves ponderously, punctuated by the occasional blunt opinion. Early on, the book hits you over the head with the fact that it’s being narrated by a bear—the narrator has a “bear’s thirst,” uses her “paw-hands,” and a chair creaks under her “bearish weight,” all in the space of two pages. But, very smartly, Tawada breaks away from the mind of a bear for the middle of the book, using a human circus worker to tell most of Tosca’s story. Her perspective helps paint a complete picture—reminding us, when they perform together, that the human is “the smallest, weakest, and slowest of all the creatures on stage”—especially because she too is marginalized and exploited in ways that both overlap and diverge with the bears.

The scope of this book seems huge. Tawada has sketched a world in which bears communicate with humans, a world with geopolitical concerns and racial metaphors. In the end it’s a surprisingly small story, but that’s not a bad thing. Its power comes through in tiny moments of crystalline observation, against the backdrop of a fantastic world that takes our obsession with animals like Knut and pushes it a captivating step forward.